Women Finally Get to Vote in Texas!

Women in Texas fought a long, hard battle to earn the right to vote in the Lone Star State. The movement formally began in 1848 with the adoption of a Declaration of Sentiments in which they wrote, "All men and women are created equal." Resolutions at the Seneca Falls Convention in New York called for the right to vote, equality under the law and educational opportunities for women.

Texas suffragists fought their battle for voting rights for 72 years before Texas passed legislation making it possible for women to have voting rights.

Twenty-one years from the first meeting in New York, Texas Constitutional Convention rejected legislation that would give women voting rights and said they deemed it "unwomanly" for her to vote 1869.

Still, they organized and continued the battle. The women involved in the early suffragists included women like Martha Goodwin Tunstall and Mariana Thompson Folsom who worked with women in the 1870's and 1880's. They worked tirelessly with other women in Texas to hold conferences and meeting in cities and towns all over Texas to promote the suffragist movement. 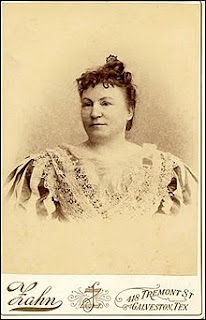 Association (TERA) in Dallas with approximately 50 members, including a few men. Now the women had an organized group of women who lobbied politicians and political party conventions. To the right is a picture of Rebecca Haynes.

The group had trouble stirring up interest in the movement from both men and women and eventually became inactive because of lack of interest and funds in 1898.

The women were not daunted and did not give up. Five years later, in 1903, women's suffrage reemerged. Annette Finnigan and her sisters were instrumental and reviving the movement by creating the Texas Equal Suffrage Association (TESA). This group sponsored women's suffrage speakers around the state, and they testified in front of the Texas legislature. Another woman, Anna Howard Shaw helped inspire new interest in the group. 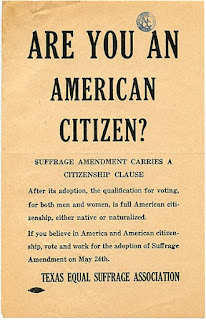 One of the handbills from TESA urging support for the amendment.

As the group grew, they organized more public events that included Suffrage Day at the State Fair of Texas. By 1915, more and more women joined the movement, and they gained the support of the Texas Federation of Women's Clubs.

A Suffrage Group Meets in Dallas to support TESA 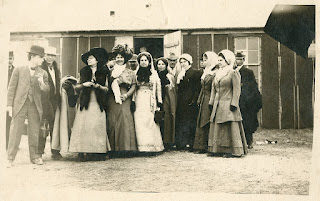 This is the group that met in Houston in 1918
However, anti-suffrage opponents began speaking out, and in 1916 organized the Texas Association Opposed to Woman Suffrage. (TAOWS) This didn't deter Minnie Fisher Cunningham who had the support of Governor William P. Hobby, and she led suffragists in making inroads into gaining success.

The 1918 election gave women the right to vote in primary elections. Over 386,000 women registered during a 17-day period. An attempt to modify the right failed in May of 1919. Then in June 1919, the United States Congress passed the Nineteenth Amendment. Texas became the ninth state and the first Southern state to ratify the amendment.

This bill allowed white women to vote, but African American women still had difficulty voting and most were turned away. It would take many more years until Congress passed the Voting Rights Act in 1965 which promised that every person in Texas had the right to vote regardless of race or gender.

From 1848 to 1965, women in Texas campaigned for a woman's right to vote. When one generation died off, another took up the cause in their relentless efforts to bring the right to fruition. Many problems still existed in the early days, but courage and perseverance finally paid off for the women. 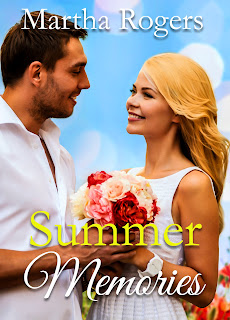 Lauren Phillips return to her hometown, Pinemont, Texas after fourteen years and reunites with a long ago friend, Derek Castella. Seeing him revives all the memories of the summers they spent together as young teens. As those memories come alive and old feeling emerge, will they have enough spark to keep the flame alive?