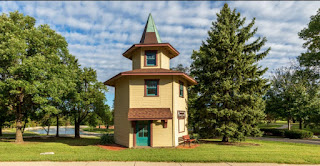 The Monkey House is located in Centerville, Ohio, and it's an historic landmark for a story long ago. Each time I drive by it, I'm reminded of why it exists.

Are there monkeys there today?

No. But in 1830, Edwin Earl Miller had a general store in the area, and he wanted to attract a large number of visitors. He came up with the idea to build a monkey house and have monkeys for people to see play. He loved monkeys.

Where did Mr. Miller get his idea?

He'd traveled to Florida, and he'd seen monkey displays in retail stores attracting the interest of many tourists. Who would've thought this would be a good idea? Poor monkeys. He thought why not try it in Centerville, Ohio. Earl Miller traveled often to Cuba to find things to sell in his general store. He had a variety of just about everything you would need on a daily basis and then some. He liked finding most of his things to sell in the general store traveling throughout the United States and Cuba. He wore a red bow tie, and he was known as the "monkey man" which he didn't like.

His wife, Dorothy, and Noah Miller. Noah was a talented carpenter and became a good friend to Mr. Miller. He was a talented carpenter which also was a blessing to Mr. Miller as he kept the store and monkey house in terrific shape. Noah also traveled with him to find antiques and supplies until Mr. Miller fell at the age of 91, and he was put in a nursing home. Unfortunately, his store was put up for auction, and the monkey house became a historical landmark. I did feel sorry for the monkeys being held captive as I found out the history of this house. The monkeys left were set free and the others had died.

I hope you've enjoyed learning about a little historical spot in Ohio today. Please visit me at Molly Jebber to learn more about my books and movie in the works for LIZA'S SECOND CHANCE.

Get Amish stories all in one book from authors you love! Amish Spring Romance

Posted by mollyjebber@yahoo.com at 12:00 AM