I may have invented a WWII heroine character for my novel, but Édith Piaf is a true heroine of WWII. Though she’s not who you would typically think of when dreaming up a heroine, and her journey to heroism was mostly bumpy, but she was no less heroic.

Édith’s rocky start began with her mother abandoning her at birth. Her father, a soldier in WWI, dropped off his daughter with his mother while he was off fighting. How delightful for this little girl to be raised by Grandma. Except, Grandma ran a brothel. The women in this matriach’s den of fallen ladies took Édith on as sort of a mascot and all looked after her.

At age three, she contracted meningitis and, due to complications, went blind. Grandma’s ladies pooled their money to find a cure, however they didn’t seek a typical sort of treatment. They took her on a pilgrimage to Saint Thérèse of Lisieux for a miracle healing. After four years of being blind, her eyes improved, and she could see. Or so the story goes. 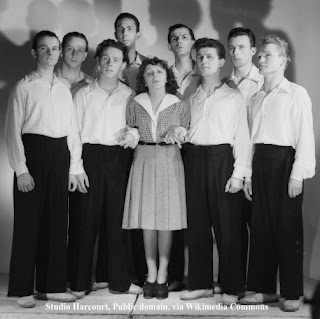 At age fourteen, Édith’s father took her with him all over France as part of his acrobatic street perfomances. This is where she first sang in public. The following year, she discovered a young woman who was thought to be her half-sister, Simone “Momone” Berteaut. Jury is out on whether she was or wasn’t related to Édith. Regardless, the girls became life-long companions. The pair sang together on the streets while Édith continued performing with her father. With the money they earned singing added to Édith’s income from the acrobatics act, she and Momone rented their own place.

In 1932, Édith fell in love with Louis Dupont, and he moved in with the girls even though he and Momone didn’t get along. Édith became pregnant and had a baby girl at seventeen. With little parenting knowledge, Édith found caring for her baby difficult. She continued street singing and even singing in the café Juan-les-Pins, Rue Pigalle. After having a fight with Dupont, she left him, taking her baby and half-sister with her to live in a hotel. While performing on the street with her sister, she often left the baby in the room alone. Dupont came and took his daughter, saying if Édith wanted her, she would have to come home. She chose to pay for childcare instead. At the age of two, the baby contracted meningitis, but unfortunately this little one didn’t survive.

The next several years were fraught with ups and downs. Being discovered and having her singing career soar were some of the high points. Due to her being only 4’10” and nervous, the nightclub owner gave her the stage name Le Mome Piaf (The Little Sparrow) and so she became known as Édith Piaf. The nightclub owner was murdered on April 6, 1936 by a mobster with previous ties to Piaf. Being accused as an accessory was a low point for Édith, however she was acquitted. 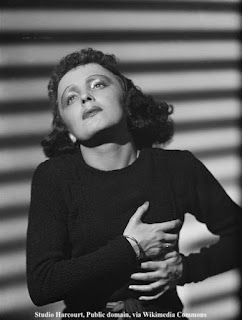 She went on to record songs, have songs written specifically for her, and starred in movies. Her popularity grew, and she became a French national treasure. She was known for singing torch songs. She had various lovers and said that mingling with the prostitutes in her grandmother’s brothel gave her a weakness for men.

During the German occupation of France in WWII, Piaf’s fame and career gained momentum. Then a unique opportunity presented itself. Édith was asked to sing for the German soldiers. She agreed but insisted the French prisoners be allowed to watch too. This must have been a great morale booster for them. However, she didn’t stop with simply entertaining. She smuggled compasses and maps to her countrymen while touring prison camps. When near Berlin at Stalag III-D camp, she insisted upon having her picture taken with the inmates. Her influential friends used them to make ID papers for the POWs, which declared each was a free French worker living in Germany. She then returned to the camp for another performance and delivered their new documents. Her efforts enabled up to 300 prisoners to escape. They and their families had to be so grateful to this true heroine.

After the war, she recorded more songs and starred in movies. She became internationally known and traveled around the world. She appeared on the Ed Sullivan Show eight times and at Carnegie Hall on two occasions.

She married twice and was in more than one car accident which led to her abuse of pain killers and alcohol for years. She died on October 10, 1963 at age forty-seven. Though there was no autopsy, the cause of death was ruled liver failure due to cirrhosis and liver cancer. On the day of her burial, Paris was brought to a standstill by tens of thousands of mourners in the streets who turned out for the funeral procession. Her coffin was draped with the tri-color flag—her country’s highest honor.

Here are some interesting parallels.
~Like her own mother, Édith abandoned her daughter.
~Like herself, Édith’s daughter contracted meningitis but unfortunately succumbed to it.
~Like her name sake Edith Cavell, Piaf also helped hundreds of war prisoners escape. 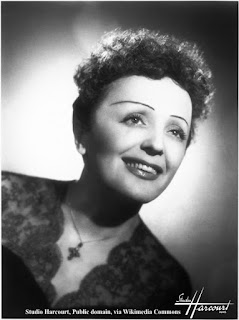 Discovering Edith Cavell while researching Édith Piaf makes me want to learn more about her. So, since I’ll be reading about her for fun, I’ll create a post on her next month.