Can You Hear Me Now? The History of Radio

Have you experienced it yet? Someone says they heard something on the radio, and someone much younger lets out a snort and says “radio.”

It does seem radio is rapidly being replaced by podcasts, personal playlists, and any-time-that-suits-you online news broadcasts.

Personally, I still listen to my favorite Christian radio station in the car and while working around my kitchen. I like the balance of news, talk, and music.

Radio has come a long way. Prior to the late 1800s, wireless radio communication was unheard of. By the 1890s, however, the race was on to develop this new form of long-distance connection and communication that would go on to change the world.

You’ve probably heard debates over who actually invented the radio. That’s because, while the Italian Guglielmo Marconi secured the first wireless telegraphy patent in England in 1896, inventor Nikola Tesla had demonstrated wireless radio in the U.S. in 1893. Tesla’s radio patent was granted in 1900.

It was December 12, 1901, when the first transmission signals crossed the Atlantic Ocean, by Marconi. Despite this, another man received the nickname, “the Father of Radio Broadcasting.” On Christmas Eve, 1906, a Canadian–born inventor, Reginald Fessenden, transmitted the first radio live-sound broadcast. He read passages from the Bible and then played O Holy Night on his violin. I can’t think of a better choice to become the first song ever transmitted over radio waves. Can you?

From then through World War I, radio was used mainly to contact ships at sea. Although Morse code was still used for clarity, you can imagine what a boon this provided to ships and sailors, especially in emergencies. Its significance increased even more during the war years. The ability to send and receive messages in real-time without the use of a physical messenger would have been an enormous advantage. I wonder how many carrier pigeons applied for unemployment?

It wasn’t until the 1920s that radio found its way into homes. Westinghouse began advertising radios for sale to the public after receiving a commercial radio license and creating Station KDKA out of Pittsburgh. England’s BBC (British Broadcasting Company) began around the same time in London.

Because humans will be humans, folks began building their own radio receivers, creating a problem for manufacturers. As a result, the RCA (Radio Corporation Agreements) was established and sanctioned by the government. Under RCA, certain companies could make receivers, while others could make transmitters.

During the 1926 newspaper strike, people began to turn to the radio for their news. Radio may have provided the greatest difference between the two world wars. While civilians had to rely on newspapers during WWI, by WWII up-to-date war news was delivered directly to nearly every home. It also provided a way for governments to rally public support.

In the meantime, of course, radio had become a source of entertainment. During radio’s “Golden Age,” advertisers controlled much of the programming. Many vaudeville entertainers turned to radio to be heard by a larger audience. Programs featured quarter-hour and half-hour blocks of soap operas such as Ma Perkins and The Guiding Light. Children enjoyed Little Orphan Annie and Flash Gordon. The most popular show was the sitcom Amos ’n’ Andy. And I’m sure you’ve heard the story of the 1938 broadcast of Orson Welles’ The War of the Worlds, which created panic when listeners believed Martians had invaded Earth. 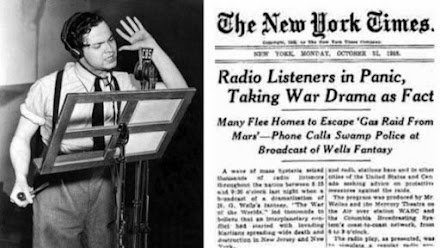 With the arrival of television in the 1950’s, radio programming drew away from serial programs and turned to music. Various weekly Top-40 shows became popular and the target audience shifted from families to teens and young adults.

FM radio stations began to overtake the original AM stations, and new forms of music began to emerge, creating the need for more stations suited to individual tastes. Today, radio has embraced satellite and streaming internet services to get its messages out. I couldn’t begin to predict what the future holds, or whether the word “radio” will truly become a relic of the past.

Two of Terrie Todd’s fictional characters ruin their mother’s radio and find a sketchy way to replace it in her most recent novel, The Last Piece. She’s also the award-winning author of The Silver Suitcase, Maggie’s War, Bleak Landing and Rose Among Thornes. Terrie is represented by Mary DeMuth of Books & Such Literary Agency. She lives with her husband, Jon, in Portage la Prairie, Manitoba, Canada where they raised their three children. They are grandparents to five boys.