My latest novel, Count the Nights by Stars, takes readers to the Tennessee Centennial Exposition held in Nashville, Tennessee in 1897. My research for the book led me to so many interesting tidbits, I had to share them with you in posts about the expo, the Parthenon, and the food visitors enjoyed.

Today, however, I want to share about a woman whose artistic talents were on display at the exposition in a very BIG way!

Enid Yandell was born in Louisville, Kentucky on October 8, 1869. She was the oldest daughter of Lunsford Yandell, Jr., a prominent physician from Louisville, and Louise, the daughter of a wealthy landowner from Nashville. Enid's artistic talents were evident from a very young age. At the age of four, she modeled a clay figurine of Eve and the biblical serpent as a gift for her mother. Throughout primary and secondary school, she continued to model and ventured into woodcarving as well, receiving training at the age of twelve from Benn Pitman, a famous woodworker from Cincinnati.
Enid continued to excel academically and artistically, securing admission to the Cincinnati Academy of Art at the age of eighteen, where she completed a four-year art degree in two years. After graduating from Hampton College and the Cincinnati Art Academy, she traveled to Europe to study under Auguste Rodin and Frederick William MacMonnies.
In an era where women were deemed too frail to successfully work in sculpting, she defied the odds by competing with and winning commissions from her male counterparts. At the young age of twenty-one, she earned national recognition for her work at the 1893 Chicago’s World Fair's Women's Building.
Armed with newfound success, she approached the Filson Club, a Louisville-based historical society, with an idea for a statue of Daniel Boone. The club gave her a $1,500 commission, and Yandell completed the seven-foot statue in 1893. It stood next to the Kentucky Building at the World’s Fair, was cast in bronze in 1906, and now stands in Cherokee Park in Louisville.
It wasn't long after this that Enid's work became a centerpiece at the Tennessee Centennial Exposition. The city of Nashville's contribution to the expo was the full-scale replica of the Parthenon, keeping with the city's nickname of "The Athens of the South." And since the original Parthenon was built as a temple to the Greek goddess Athena, it was decided the Nashville Parthenon needed its own statue of Athena. But a small, life-sized statue would not do. It needed to be BIG! And who better to create such a work of art than Kentucky's Enid Yandell.
Working in her studio in Paris, Enid based her design on the Pallas de Velletri, found near Rome, Italy, in the eighteenth century, which was itself a copy of an ancient Greek statue. It depicted Athena with one arm raised victoriously and the other arm with upturned palm in a gesture of welcome. The 40-foot sculpture was shipped by train to Amsterdam in three sections. It was then secured on the deck of a steamship and sent to New Orleans. It's final journey to Nashville was by train. The statue was assembled on the expo grounds and stood in front of the Parthenon which was the the Fine Arts Building. Like other statues in the exhibition, Yandell's Athena was made from staff, a non-permanent building material. The sculpture was never cast in bronze and within a year it deteriorated to pieces.

Enid enjoyed a successful career. However, World War I deeply affected her and she virtually stopped sculpting. She became involved in charity work and is quoted as saying, "After the war there was no art. There was nothing but agony and sorrow and a great striving to help." At the end of the war, Enid returned to the United States and worked for the Red Cross. The social work totally consumed her time and efforts. Enid's lack of attention to her career continued through the 1920s. By 1925 she apparently had ceased most sculpting. Early in 1934 her health began to fail, and six months later she died at age 60.
Enid Yandell will be remembered as a gifted sculptor, social activist, and suffrage leader. I'm very glad my research into the Tennessee Centennial Exposition introduced her to me. 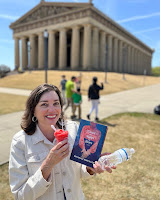 1961. After a longtime resident at Nashville’s historic Maxwell House Hotel suffers a debilitatingstroke, Audrey Whitfield is tasked with cleaning out the reclusive woman’s room. There, she discovers an elaborate scrapbook filled with memorabilia from the Tennessee Centennial Exposition. Love notes on the backs of unmailed postcards inside capture Audrey’s imagination with hints of a forbidden romance . . . and troubling revelations about the disappearance of young women at the exposition. Audrey enlists the help of a handsome hotel guest as she tracks down clues and information about the mysterious “Peaches” and her regrets over one fateful day, nearly sixty-five years earlier.