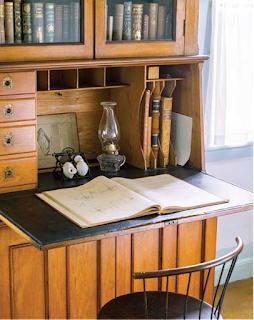 When my husband first referred to the “secretary,” I thought he meant a person behind a typewriter. Imagine my surprise when I learned it is actually the term for a type of desk, usually antique in today’s terms. Probably all you folks knew this already, but I learned something new. So then I decided I would learn more and now I get to share it with you!

A secretary desk or escritoire is usually a base of wide drawers located beneath a desk top with a hinged surface, flat when opened and oblique when closed, forcing the user to put everything away before closing it. There is probably a space for books or other articles that closes with glass doors. Normally, it’s a tall and heavy piece of furniture, Sort of like a cross between a dresser and a desk with a bookshelf thrown in. Or apparently, anything similar. 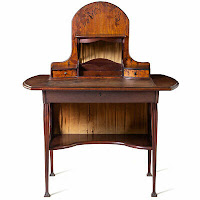 Originating in the 17th century, the escritoire, a French term, was a small writing desk with a fold-up or pull-out surface.  The escritoire was designed to be conveniently collapsible in sitting rooms.

The word secretary derives from the Latin word for “writer”. The secretary desk differs in that it emphasizes storage. It features a slanted lid that folds forward and becomes a writing surface. 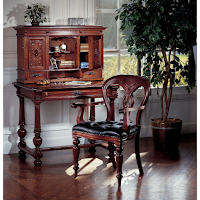 Most of the secretary desk is dedicated to compartments, vitrines, cubbyholes, and internal drawers. The many items you could store in it are hidden from view once you shut the lid again. That was part of the appeal.

A secretary desk is, despite its name, generally not used by a person with the title of secretary. Who knew? The first authentic secretaire desk is believed to have been created in the 18th century by Jean-Francois Oeben,

the royal cabinetmaker to Louis XV. Oeben (pictured left) was known for his mastery in the creation of marquetry and mechanical desks.

Secretary desks have evolved into many forms over time. From the late 18th century through the 19th there were many inventive styles featuring elaborate carving, 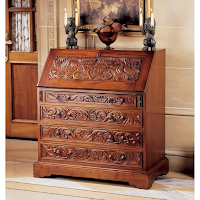 inlays, and marquetry made of exotic woods or even lacquered black to resemble a piece of Chinese furniture. The most famous English maker of secretaries, and many other pieces of furniture, was Thomas Chippendale, and his son of the same name, who created painstakingly detailed pieces for houses and grand halls throughout Great Britain.

Furnishings were sparse in the  earliest American homes; desks in particular were not commonly found. Many people couldn’t read or write, and few had books, except perhaps for a family Bible. In fact, a Bible box—a plain wooden container with a flat or slanted lid, which held the Bible and important papers—was the earliest desk. It doubled as a writing surface or a place to sign documents.

By the beginning of the 19th century, most Americans were literate thanks to Thomas Jefferson and an emphasis on free public education. Desks became a coveted furniture type. Soon, secretaries would be one of the most sought after items in America.

Besides the extremely detailed desks that were created in this period there were also some secretaries that comprised a far more practical side. “Campaign” or knockdown furniture was made to be assembled and taken apart quickly so that military officers could easily transport them as they moved on to the next battle.

These pieces were built to offer as much storage as possible so the desk and the writing surface area was often a bit smaller on campaign secretaries than on desks designed for residences.

Secretary? Escritoire? Or my personal choice, a desk? What would you call this type of furniture? I’d love to hear about it in your comments.

Rand isn't looking for true love. What he needs is a wife to help him care for his orphan nieces. Desperate, he places an advertisement and hopes for the best. Fleeing her former employer who would use her to further his unlawful acts, a newspaper advertisement seems the perfect refuge to Carly. Hiding herself on Kansas ranch is her best shot for freedom. But its sanctuary comes with a price—a husband. Marrying a man she doesn't know means sacrificing her dreams, but it's better than being caught by the law. Or is it?