The Castillo de San Marcos--Pt 6 (and a giveaway!)

Hello, readers! Time for your next installment of the history of the Castillo de San Marcos. If you’ve been following along over the last handful of months, you’ve read about the Spanish building this large masonry fort in St. Augustine, Florida, how the fort came into British possession, was returned to Spanish control for a brief time, became an American acquisition, and then traded hands between the Federal and Confederate armies during the Civil War. So what happened after the war’s end? Life in the St. Augustine fort was quiet for only a decade before it next came into use.

As many of you may know, the western territories were fraught with conflict. Not just between lawmen and outlaws, but also with conflicts between the Native American tribes and the western settlers. Many battles cropped up between settlers and Indians, with much bloodshed on both sides, until the Frontier Army and the Native American tribes such as the Lakota Sioux, Cheyenne, Arapaho, Comanche, and others, were in an all-out war. There were many instances where whites attacked and massacred sleeping camps of Indians, and others where Indians wiped out whole wagon trains or military units. It was a long, drawn-out period where many lives were lost—a tragic piece of America’s history.

That war finally came to an end on the western plains in the mid-1870s. In 1874 and 1875, the various Indian tribes surrendered to the Army. Investigations were done into some of the most horrendous of attacks perpetuated by members of these tribes, and those who led them were singled out to be made examples of. The rest were sent to the reservations in Indian Territory (modern-day Oklahoma). While some Indians were tired of the decades of conflict and were willing to live peacefully, others chafed at the American government being able to tell them where and how they should live. Those in the latter group often attempted to stir up trouble within the reservation lands, leading their other tribesmen to rebel. So these men also were singled out for further punishment. In total, there were seventy-three men from five tribes—the Cheyenne, Arapaho, Comanche, Kiowa, and Caddo—who were to be punished. Their punishment was to be sent to distant Florida, far from their tribal lands, and completely cut off from their people, to be incarcerated in Fort Marion (aka the Castillo de San Marcos).

The trip from the west took roughly a month, and during that time, these seventy-three men traveled by wagon to reach the railroad, then by train all the way to the panhandle of Florida. There, they disembarked the train and boarded a steamboat for a brief ride south. Then another short train ride, and finally, they arrived at the fort they would call home for some unspecified time. Their travels east were not without difficulties. While the men were used to galloping for miles on horseback, the unfamiliar movements and sounds of the train made many of them sick at their stomachs. There was at least one escape attempt during a brief stop-over, leading to one of the seventy-three men being shot and left behind under military guard until he was well enough to travel. By the time these prisoners of war reached St. Augustine’s fort, they were shells of the fierce warriors they’d once been. Instead, they were thin and bedraggled, wrapped in blankets with shackles on their hands and feet. They shuffled through crowds of St. Augustine residents to reach the stone fort and face their punishment.The man who was placed in charge of the Indians’ care was one Lieutenant Richard
Henry Pratt. He quickly realized that his charges were wasting away with little to do, so he struck upon the idea to give them men structure. First, he instituted military drills and physical exercise, just like the Army soldiers were made to do. Then, Pratt began noticing that the casemate rooms in which the men slept each night were moldy. He put the Indians to work scrubbing the walls and ceilings. With each new task, the men’s outlook seemed to improve. They liked to work. It wasn’t long before Pratt approached his military superiors to ask about teaching the Indians reading, writing, simple arithmetic, and even trades with which to make money in the white man’s world. After some discussion, he was granted approval for the progressive plan, and Pratt teamed up with various women in the St. Augustine community to begin classes. Two of the most prominent women were Sarah Ann Mather and Rebecca Perit, who did much to further the lives of freed slaves and the Native Americans in St. Augustine. With their help, Lt. Pratt even began weekly church services within the fort, led by local ministers from the St. Augustine area.

Just like on the reservations, there were some who took to the new ways, and those who didn’t accept it as easily. But by and large, the Indians cooperated enough to make the plan work. For several hours each weekday morning, they would sit in class and learn to speak and read English, work simple math problems, and other academic subjects. In the afternoons, they would learn trades like shoe cobbling, blacksmithing, farming, and other skills that they would be able to carry into life after incarceration.

As they embraced their new, structured day and showed themselves to be trustworthy, Pratt begin giving them more freedoms. When a local jeweler approached Lt. Pratt with the request to have the Indians gather and polish “sea beans” for him to sell in his store, they went to work. They were given time to go across Matanzas Bay to Anastasia Island and gather then beans, then spent hours polishing the beans to a high shine. They turned over thousands of the trinkets and were paid handsomely for their efforts. This led to other money-making ventures. Drawing “ledger art” and selling it outside the fort. Making bows and arrows to sell to tourists. Teaching those same tourists how to use the authentic weapons. In addition, they also began putting on cultural displays—powwows, Native dances, “buffalo” hunts (using cattle from local ranches and the worst of the nags the local livery stables had to offer).

For three years, these industrious men were incarcerated in St. Augustine’s ancient fort. While many of those seventy-three fell ill to consumption (tuberculosis) and other illnesses, most survived and either returned to the reservations and their families—or, in some cases, followed Pratt on his next venture, which was to found the Carlisle Indian School in Carlisle, Pennsylvania.

It’s Your Turn: Lt. Richard Henry Pratt fought hard for the seventy-three Native American men he was put in charge of at Fort Marion in 1875. He employed progressive ideas to educate these men in hopes they might be able to one day integrate into society at large. In your opinion, was Pratt a hero for his ideas to help the Indian men learn skills that would help them integrate, or was he a villain for forcing them to embrace a culture not their own? Leave your honest opinion with an email address to be entered into a drawing for an autographed paperback copy of Love’s Fortress (US entries only). (I know this topic can bring some heated feelings, so please be kind in your responses)! 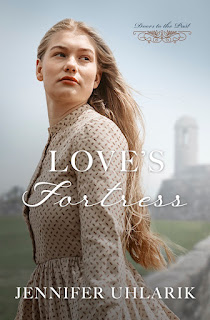