Jacob DeShazer, WWII Doolittle Raider: His Amazing Story as a POW Survivor on a New Mission to Japan

Corporal Jacob "Jake" DeShazer
During the four months since the unprovoked bombing of Pearl Harbor on December 7, 1941, Japan had won a series of battles: Wake Island, Guam, Manila, and Bataan. To strike back at Japan and boost the morale of the American people, military leaders of the U.S. Army Air Corps designed a top secret bombing mission. 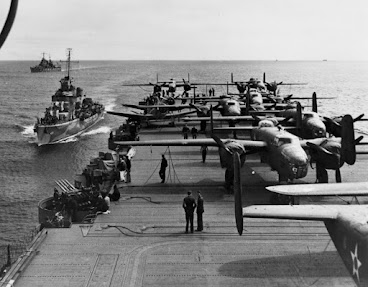 Flight deck of the aircraft carrier U.S.S. Hornet
On April 1, 1942, April Fool’s Day, sixteen B-25 bombers were hoisted onto the flight deck of the U.S.S. Hornet.
The mission: A daring low-level bombing raid on military targets around Tokyo
The commander: Lt. Col. James Doolittle
“Doolittle Raiders:” Sixteen 5-man bomber crews - 80 men, all volunteers
Jacob “Jake” DeShazer, on “Crew Sixteen,” was assigned to the bomber named Bat out of Hell. The Bat, as they called it, was the last bomber to be loaded on the crowded flight deck. Its tail actually hung over the Hornet’s stern during the rough voyage toward Japan. 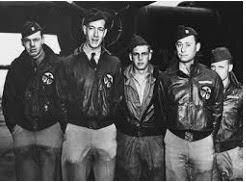 "Crew Sixteen" of Bat out of Hell, L-R: Lt. George Barr, navigator; Lt. William Farrow, pilot; Sgt. Harold Spatz, gunner; Lt. Robert Hite, co-pilot; Cpl. Jacob DeShazer, bombardier.
The Hornet’s convoy had hoped to evade detection until they were within 400 miles of Japan. Unfortunately, at dawn on April 18, two Japanese destroyers were sighted. A battle ensued, and the destroyers were sunk. Since it was likely they had radioed the convoy’s position, the decision was made to prepare the bombers for takeoff as soon as possible. The extra distance from Japan made this mission even more dangerous. Would the bombers have enough fuel to fly to areas in Free China, beyond Japanese-held territory? 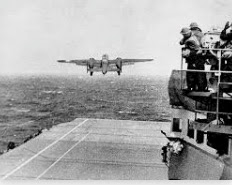 B-25 bomber taking off from U.S.S. Hornet
Taking off from a rising and falling flight deck in the rough ocean proved to be a challenge. One by one, the B-25 bombers roared forward and soared into the sky. Before the Bat took off, powerful wind gusts bounced it around and threatened to blow it off the stern. Sailors used ropes to hold it in place. When the Bat took off at 9:20 a.m., the crew noticed a jagged hole a foot in diameter in the Bat’s plastic nose. They knew the drag from this hole would reduce airspeed and use up their precious fuel supply, but their efforts to plug it were futile. They bombed their target, an oil refinery 300 miles south of Tokyo, and then headed toward China. After fourteen hours in the air, their fuel was almost gone, and the night fog made it hard to determine where they were. At 11:40 p.m., Lt. Farrow ordered his crew to jump. Jake leaped out into the shrieking wind.
On that same night, miles away in Oregon, Jake’s mother awoke, feeling a strange sensation of falling down through the air. She felt the weight of a terrible burden and cried out to God in prayer. “Suddenly the burden was gone,” she said, “and I drifted into an untroubled sleep.”

Jake landed on a mound of dirt, and realized he was in a Chinese graveyard. As he cut up and hid his parachute, the pain in his chest told him he had broken some ribs. He was soon captured by Japanese soldiers and reunited with the other four “Crew Sixteen” members, along with three surviving members from “Crew Six,” who had crash landed in the ocean—Lt. Dean Hallmark, Lt. Robert Meder, and Lt. Chase Nielsen.
Over the next six months, these eight “Doolittle Raiders” were imprisoned in a number of locations in China, including the infamous Japanese prison camp known as the “Bridge House.” They were kept in conditions of squalor and given barely enough food and water to survive, while enduring day after day of torture and interrogations.

Even though Jake felt fear, he made sure he didn’t show it. To every question, he stubbornly replied, “I won’t talk.” One Japanese interrogator told Jake, “I am the kindest judge in all China. I want to treat you real good.” But when Jake refused to answer his questions, the judge flew into a rage and said, “Tomorrow morning, I’m going to have the great honor of cutting your head off.” Jake looked him in the eye and said, “It would be a great honor to me, if the kindest judge in China cut my head off.”

In the summer of 1942, the eight “Raiders” endured a trial, of sorts, and were sentenced to death. Several stressful weeks passed, as they wondered when the sentence would be carried out. Finally, in mid-October, Jake DeShazer, Lt. Barr, Lt. Hite, Lt. Nielsen, and Lt. Meder were told that the emperor of Japan had commuted their sentence to life in prison. The other three were executed.
From then on, the five remaining “Raiders” were kept in solitary confinement. During the rare times they were allowed out of their filthy cells, Jake struck up conversations with Lt. Robert Meder, and he was impressed with Meder’s unshakeable Christian faith. Jake was saddened when Lt. Meder died in December 1943, after twenty months in captivity. His death prompted slightly better treatment. Food rations were increased from two meals to three meals a day. They were also given a few books in English, including a Bible. Hours passed slowly in their bare cells, so the books were eagerly read and shared.

In May 1944 it was Jake’s turn for the Bible. He read through it several times, and the words seemed to come alive. As he memorized scripture passages, a powerful understanding gripped him. Even though he’d had a Christian upbringing, Jake realized he had lived a worldly life. When he prayed for forgiveness, his heart was instantly filled with joy. He said, “Hunger, starvation and a freezing cold prison cell no longer had horrors for me. Even death could hold no threat when I knew that God had saved me.”

Jake cleaned up his language, but he struggled with obedience to Matt. 5:44: “Love your enemies... pray for them which despitefully use you and persecute you.” He decided to live out his newfound faith by changing his attitude toward a brutal prison guard. Jake began greeting him with a smile and initiating friendly conversations. Gradually, the guard responded. He stopped mistreating Jake and even gave him extra treats, like a handful of figs. Jake was amazed at how easy it was to make a friend out of an enemy. He said, “Jesus was not an idealist. He told us the best way to act, and it will work.”

For the next several months, Jake’s faith would be tested by other cruel guards and a serious illness. But the scriptures he had memorized helped him to cope. Finally, on August 20, 1945, after forty months of imprisonment, the remaining four “Raiders” were released, looking pale, weak and thin... but overjoyed to be free! 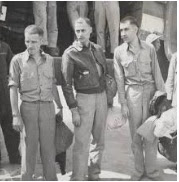 Three of the four newly-released "Raiders," L-R: Jake DeShazer; Robert Hite; Chase Nielsen.
While traveling home, Jake recalled the strange experience he’d had one day, while praying in his dark prison cell. A brilliant light suddenly appeared, and Jake heard the Holy Spirit speak to him clearly, “You are called to go and teach the Japanese people, and to go wherever I send you.” Despite his cruel imprisonment, Jake felt compassion for the defeated Japanese people. He knew he’d been given a mission to teach them about the love of Jesus.
Jake spent time with his family, but he was soon in demand for public speaking engagements about his experience as a “Doolittle Raider” and as a POW, as well as his Christian faith and his desire to minister to the Japanese people.

Jake and his wife Florence sailing to Japan, December 1948
Jake enrolled in Seattle Pacific College, where he met Florence Matheny. They were married on August 29, 1946. After graduation, Jake was ordained as a minister in the Free Methodist Church. And on December 14, 1948, he and Florence left San Francisco on the U.S.S. General Meigs, to serve as missionaries in Japan.

Jake greeting people after a sermon in Japan
In the beginning, many Japanese people came up to Jake after his sermons and admitted they had come with hatred in their hearts toward him, because of the war. But their attitude changed when they saw the sincerity of his faith and heard his message about the love of Jesus. Two of Jake’s former prison guards became Christians. And in 1950, Captain Mitsuo Fuchida, the commander of the Japanese air squadron that bombed Pearl Harbor, also became a Christian. He and Jake gave their testimony together at a large rally in Osaka, Japan.

L-R: Mitsuo Fuchida and Jacob DeShazer in WWII uniform; and pictured together in 1950 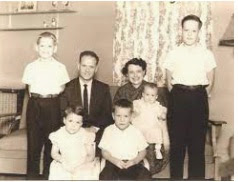 Jake, Florence and their five children, 1959
Together, Jake and Florence dedicated their long lives to spreading the gospel in Japan, while taking occasional furloughs back to the United States. In 1978, they retired from missionary service and moved to Oregon. Jake died in 2008, at the age of 95. Florence died in 2017, shortly before her 96th birthday.

Notes on the fate of the 80 “Doolittle Raiders:”

· 65 “Raiders” (13 of the 16 crews) made it safely back to areas of Free China
· “Crew Eight” landed in the Soviet Union; 5-man crew treated well, freed in 1943
· 2 of “Crew Six” died in plane crash: Sgt. William Dieter; Cpl. Donald Fitzmaurice
· 8 “Raiders” were captured by the Japanese and imprisoned
· 3 of them executed: Lt. Dean Hallmark; Lt. William Farrow; Sgt. Harold Spatz
· 1 of them died in captivity: Lt. Robert Meder

You can read the complete story of Jacob DeShazer in this excellent book:

Goldstein, Donald M. and Dixon, Carol Aiko DeShazer. Return of the Raider: a Doolittle Raider’s story of War and Forgiveness. Creation House, Lake Mary, FL, 2010.
_________
Mary Dodge Allen has won the 2022 Christian Indie Award from the Christian Indie Publisher's Association and two Royal Palm Literary Awards from the Florida Writer's Association. She and her husband live in Central Florida, where she has served as a volunteer with the local police department. Her childhood in Minnesota, land of 10,000 lakes, sparked her lifelong love of the outdoors. She has worked as a Teacher, Counselor and Social Worker. Her quirky sense of humor is energized by a passion for coffee and chocolate. She is a member of the Florida Writer's Association, American Christian Fiction Writers and Faith Hope and Love Christian Writers.
Website: www.marydodgeallen.com 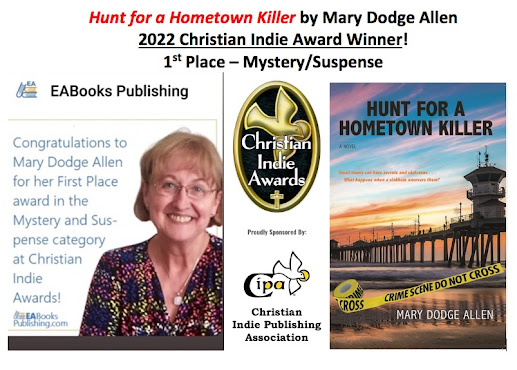