What Would You Do With Fifty-Seven Cents?

Before I start, I must confess I had never heard of Hattie May Wiatt until a few months back when I read about her amazing story on an author friend’s blog. If you’ve never heard this story, read on. It’s truly memorable and just as relevant today.

Hattie, a child of about 6-years-old was growing up in a poor family in Philadelphia during the 1880s. Hattie lived near a Baptist Church pastored by Russell Conwell. The church was small and very crowded. Despite the overcrowding, Hattie loved Sunday School. Unfortunately, there were many times not all of the children who came to Sunday School could fit inside. Many Sunday mornings, Hattie and other children were left standing outside the building.

On one such Sunday morning, Pastor Conwell spotted Hattie standing outside, the disappointment plain on her face. He told her it was his hope that one day the church would have enough funds to build a bigger building so that all the children who wanted to attend could come to Sunday School. At that moment Hattie resolved to help in whatever way she could.

Sadly, Hattie died of diphtheria at the age of seven. Her younger sister died of the same dreaded disease five days later. Under Hattie’s pillow, the distraught mother of the Wiatt girls found a little torn pocketbook with fifty-seven cents inside. The coins were wrapped in a scrap of paper where she had written, “To help build the little Temple bigger, so that more children can go to Sunday school.” 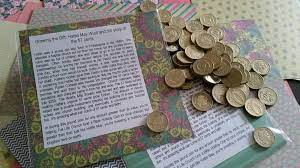 Fifty-seven cents was no small savings for 1886, but Hattie’s mother decided not to keep the money. Instead, she took it to Pastor Conwell when he presided at Hattie's funeral. Rev. Conwell told the story of Hattie's coins at a subsequent church service, announcing it as the first gift towards the new Sunday School building.

Pastor Conwell converted the fifty-seven cents to pennies and offered the pennies for sale netting a total of $250! This was a huge sum back then, but Hattie’s generosity had inspired others. Reportedly, fifty-four or the original fifty-seven pennies were returned to Pastor Conwell, which he then put on display as even more inspiration. The $250 was also changed into pennies and resold which provided the resources for the original funding of what became known as the ‘Wiatt Mite Society’. In this way, Hattie’s 57 cents kept on multiplying. The local papers published her story far and wide, and within five years the fifty-seven pennies had multiplied to be $250,000.

Eventually, the congregation not only built a bigger Sunday School but an entire new church. The Wiatt Mite Society managed to raise the money against all odds and the church was built right on Broad Street. The owner of the lot purchased for the new church accepted Hattie's pennies as the first down payment on the property, and though it was officially called Grace Baptist Church, this new church also became known as The Temple. It was out of this church that Temple University grew as well. Conwell often told the story of how this congregation of thousands was born out of Hattie May's small investment. He said "she is happy on high with the thought that her life was so full, that it was so complete, that she lived really to be so old in the influences she threw upon this earth."

Today in Philadelphia, the Baptist Temple Church seats 3,300, the Temple College accommodates more than 1,400 students, and the church owns the Temple Hospital. If you were a 7-year-old with 57 cents, what would you do with it? I’d have spent it all on paper dolls or candy, none of which would have been around for very long or did anyone any good. Let Hattie May be an inspiration to you!

Scribbling in notebooks has been a habit of Cindy Regnier since she was old enough to hold a pencil. Born and raised in Kansas, she writes stories of historical Kansas, especially the Flint Hills area. Cindy is married to her husband of 39 years, has two grown sons, a son residing in heaven, and two beautiful daughters-in-law.