Christmas in July - The History of Christmas Cards

During the 1840s England, one custom at Christmastime was to send out the Christmas letter to all your friends. It had to be delivered between December 25th and New Year's. Thanks to a recent expansion of the British postal system, the sender could mail a letter or card anywhere in the country by affixing a penny stamp to the correspondence--and many people were doing just that. 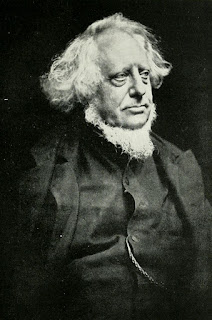 Sir Henry Cole - Wikicommons
Sir Henry Cole, who traveled in the elite social circles of early Victorian England, had the misfortune of having too many friends—and this was a problem. As the founder of the Victoria and Albert Museum in London and an enthusiastic supporter of the new postal system, Sir Cole was a busy man.
As he watched the stacks of unanswered Christmas correspondence piled up and he fretted over what to do. In Victorian England, it was considered impolite not to answer mail. He simply had to figure out a way to respond to all of these people in a timely manner. 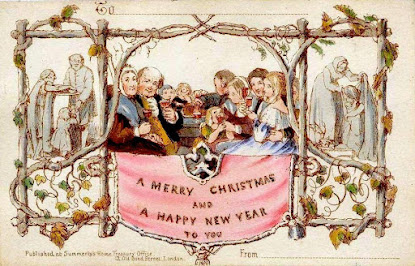 Cole hit on an ingenious idea. He asked artist friend, J.C. Horsley, to design an idea that Cole had sketched out in his mind. Cole then took Horsley’s illustration—a triptych showing a family celebrating the holiday flanked by images of people helping the poor—and he had a thousand copies made by a London printer. The image was printed on a piece of stiff cardboard 5 1/8 x 3 1/4 inches in size. At the top of each was the salutation, “TO:_____” allowing Cole to personalize his responses, which included the generic greeting “A Merry Christmas and A Happy New Year To You.” At the bottom was a "From" line where he could sign his name—and the first Christmas card had just been created.
Henry Cole sounds like a practical and clever man.
Since it's still July, and I'm talking Christmas in July, I thought I'd share one of my heart-warming Christmas stories with you. 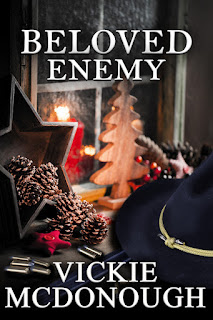 As a Union sniper, killing has become easy for Captain Christmas “Chris” Haley. After four long years of fighting against his own countrymen, the once naïve farm boy is now a war-hardened soldier whose faith in God is shaken. Chris is ready to set aside his rifle and return to his Kansas farm. But will his family accept the man he’s become—angry and unsure if he still believes in God? His mother's pretty caregiver catches his eye and begins to give him a reason to go on each day. In spite of his bitterness, his heart is softening. But what happens when he learns the secret Hannah is keeping? 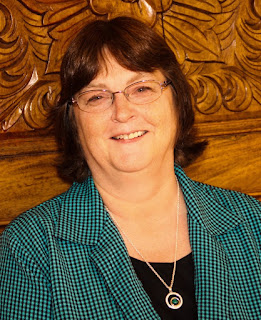 Vickie McDonough is the CBA, EPCA, and Amazon best-selling author of 50 books and novellas. Vickie grew up wanting to marry a rancher, but instead, she married a computer geek who is scared of horses. She now lives out her dreams penning romance stories about ranchers, cowboys, lawmen, and others living in the Old West. Vickie’s books have won numerous awards including the Booksellers Best, OWFI Best Fiction Novel Award, and the Inspirational Readers’
Choice awards.