Down in the Holler with Bluegrass Music + Giveaway

The Kentucky Derby winner didn't race in the Preakness and finished the Belmont Stakes in 6th, but he's still a champion and record-setter with the biggest odds gap on his win. He won't be put out to pasture anytime soon, but when he does, he'll enjoy some of that Kentucky bluegrass. If you missed the post about why bluegrass is called that, you can read it here.

Today, we're shifting from blue grass to bluegrass music, a style which began in the Appalachian region of Kentucky. 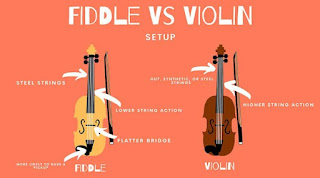 If I were to ask you, are a fiddle and a violin the same instrument or are they different, what would you say? Take a moment or two to ponder that. It's an age-old verbal debate with an adrenaline-charged intensity reminiscent of the duel in Devil Went Down to Georgia by the Charlie Daniels Band. If you said they are different, you're right. Of course, if you said they're the same, you are also correct. :) Now, don't go scratching your head too long. It basically all comes down to changeable aspects of the same instrument, and those are the type of strings, how they're played, and how low or high the bridge is set. Beyond that, the core shape and construction of the instrument remains unchanged. 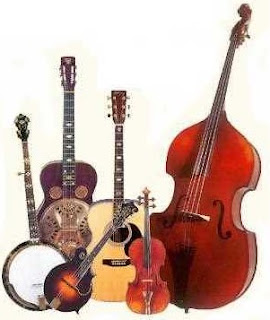 The typically lower-bridge fiddle, which decreases the spacing between the strings, is one of the main two instruments in Bluegrass music. The banjo, mandolin, guitar, and upright bass round out the rest of the group. Just like Big Band music got its inspiration from the Classical masterpieces, Bluegrass also has its roots in centuries-old music stylings. Settlers from Britain, Ireland, and Scotland moved into the Appalachian region, and their ballad-style of music from their homeland came with them. That's why a lot of the music has a sense of jigs and reels. The fiddle was crafted by Italians in the sixteenth century and was popular due to its small size and versatility. The banjo came to America by way of the African slave trade and received notice through minstrel shows. The guitar came from Spain and is used primarily for rhythm.
The sounds of this style of music permeated the rolling hills of the Appalachian region all through the eighteenth and nineteenth centuries, and the dips and valleys came to be known as "hollers" with a characteristic high, lonesome sound echoing throughout the hills. Although the sound is centuries older, it wasn't until the 1940's that Bluegrass music received its official genre name. Bill Monroe and the Bluegrass Boys are given the distinction of creating the traditional acoustic instrumentation commonly heard in this genre, as they brought this style to the radio and live performances. They named their band because of their home state of Kentucky, and thus the term "Bluegrass" was assigned. 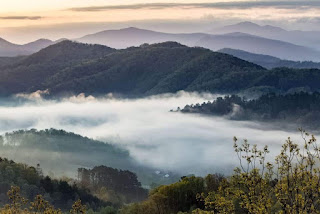 What began as ballads, narratives, and folk-style music, with minor references to "hillbilly" stylings, developed into deeply moving and purposeful music felt with the soul. These mountain residents are also touted as being the last remaining preservers of the original English dialect, older than the speech of Shakespeare, and closer to the speech of Chaucer. This unique dialect can be heard in the words of many Bluegrass songs and especially in the speech of these rural inhabitants of the holler. All language changes and evolves with time, but given the nationality of the original settlers of this region (mixed with various African cultures), if you find it hard to understand their speech or the words in original Bluegrass music, look at some of the Old English vernacular to find a lot of the meanings.
NOW IT'S YOUR TURN:

* Bluegrass music. Yay or nay for you?
* If you enjoy Bluegrass at all, do you have a favorite artist or band? Who?

* For the non-fans, what is your favorite style or genre of music? Favorite artists/groups?

Leave answers to these questions or any comments you might have on this post in the comment box below. For those of you who have stuck around this far, I'm going to start a new pattern of sending a FREE autographed book to one person each and every month from the comments left on this blog. You never know when your comment will be a winner!
Come back on the 9th of August to learn about George Rogers Clark, Kentucky Pioneer.
For those interested in my "fictional" life as an author and industry news about other authors, subscribe to my quarterly newsletter. Receive a FREE omitted chapter from my book, A Grand Design, just for subscribing!