Thank you for joining me on another virtual visit to the beautiful and historic state of Maryland. For those who missed the first post in the series can read about the Capital Region here https://www.hhhistory.com/2022/07/maryland-my-maryland-part-1.html.  Today we’re going to make our way to the Southern Region which is comprised of Calvert, Charles, and St. Mary’s County, and the southern portions of Anne Arundel and Prince George’s counties.

As one of the original thirteen American colonies, Maryland was founded by George Calvert, 1st Baron Baltimore, a member of parliament and later Secretary of State under Britain’s James I. After losing his influence for a number of reasons, he resigned his political office in 1625 and made a public declaration of his Catholicism. It was at this time he was named Baron Baltimore as part of the peerage of Ireland.

Initially, his interest in colonization was for business reasons, but eventually, he would create a refugeon the southeastern peninsula on the island of Newfoundland for persecuted Irish and British Catholics. However, the area’s cold climate was not to his liking, and he looked for a more hospitable spot. Traveling south, he discovered the area that would become the state of Maryland, then sought a new royal charter to settle the area. Unfortunately, he died five weeks before the charter was sealed, leaving the colony to be managed by his son Cecil.

On March 25, 1634, the English ships, the Ark and the Dove landed at St. Clements Island in St. Mary’s County. The vessels held a group of Catholics and Protestants. Despite their plan to live together peacefully, tension slowly developed over the differing beliefs of the founders, colonists, and English government. As a result, the Act Concern Religion was proposed, then passed by the General Assembly and is said to be the first legislative act allowing “liberty of conscience” in the Western World. Religious freedom was now codified into law, and would later serve as the foundation for the First Amendment of the U.S. Constitution. A short time later, Charles County would be named for the third Lord Baltimore, and Calvert County for the family.

The Southern region, bordered nearly three-quarters by water, began as a rural, agriculture (mostly tobacco), oyster fishing, and crabbing region and would remain so for more than two hundred years. During the steamboat era, the region would be linked by copious passenger and freight ships operating on the Chesapeake Bay.

The Civil War divided the state, and the Southern Region was primarily sympathetic to the Confederacy as evidenced by the several people who helped President Lincoln’s assassin John Wilkes Booth escape through the area. Large numbers of Union occupying troops and patrolling river gunboats prevented the state’s secession, but according to many reports, frequent nighttime smuggling across the Potomac River to Virginia was commonplace.

Geographically, the region is in the subtropical climate zone with hot, humid summers and mild to chilly winters with lots of precipitation year-round. Because of its proximity to the ocean, oysters, crabs, and striped bass are among the more popular foods to be had, although a notable dish from the region is stuffed ham, the stuffing a mixture made from cabbage, kale, onions, spices and seasonings that is inserted into deep slits slashed in a whole corned ham.

Portions of the Southern region have evolved from rural farmland into “bedroom communities” ofneighboring Washington, DC. There are seven military bases (including Fort George G. Meade which plays a part in my upcoming release) in the region, and the U.S. Naval Academy is located in the state’s capital Annapolis. Additionally, numerous government agencies, power plants, research facilities, and “beltway bandits” (companies who contract with the government) call the Southern
region home. However, vacationers still appear in droves to visit Solomon’s and Broomes Islands as well as take up residents in the hundreds of summer cottages that dot the region, unsurprising considering the more than five hundred miles of shoreline on the Patuxent River, Potomac River, and Chesapeake Bay and its many tributaries.

Will a world at war destroy a second chance at love?

Estelle Johnson promised to wait for Aubry DeLuca, but then she receives word of his debilitating injuries. Does she have the strength to stand by him in his hour of need?

Aubry DeLuca storms the beaches at Normandy, then wakes up in the hospital, his eyes bandaged. Will he regain his sight? Will the only woman he’s ever loved welcome him home or is he destined to go through life blind and alone?
Pre-order link: https://amzn.to/3oqK3EO

Linda Shenton Matchett writes about ordinary people who did extraordinary things in days gone by. A volunteer docent and archivist for the Wright Museum of WWII, Linda is a former trustee for her local public library. She is a native of Baltimore, Maryland and was born a stone’s throw from Fort McHenry (of Star Spangled Banner fame). Linda has lived in historic places all her life, and is now located in central New Hampshire where her favorite activities include exploring historic sites and immersing herself in the imaginary worlds created by other authors. Learn more about Linda and her books at http://www.LindaShentonMatchett.com 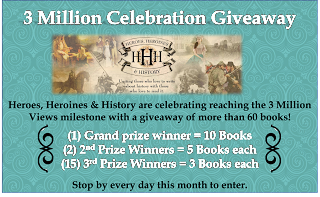 To celebrate reaching 3 Million views, HHH is hosting a HUGE giveaway of over 60 books in 18 prizes, so there are many chances to win! One grand prize will consist of 10 books, two readers will win a second prize containing 5 books, and there will be 15 winners of a third prize containing 2 books each. There are several ways to earn entries, such as following or commenting on the HHH blog each day. Thank you for being part of the HHH community, and best wishes in the giveaway! http://www.rafflecopter.com/rafl/display/ce16d9c612/
Posted by Linda Matchett at 12:30 AM