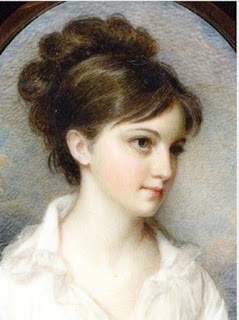 This sixteen-year-old has been called the “female Paul Revere.” Her 40-mile ride on the night of April 26, 1777 during a driving rainstorm, alerting the countryside that “The British are coming,” was nothing short of amazing. And unlike Paul Revere, Sybil managed to escape capture by British patrols during her long ride.

Sybil was the oldest of twelve children. In 1777, her father, Col. Henry Ludington commanded the militia in Dutchess County, New York. (Later in the war, he served as an aide to Gen. George Washington.) Col. Ludington was such an effective militia commander, the British offered a reward of 300 English guineas for his capture, dead or alive.

On April 25, 1777, British Gen. William Tryon, former governor of New York, came ashore with 2,000 British troops at Westport, Connecticut and began marching toward Danbury, Connecticut, where a large amount of Continental Army munitions and provisions were stored. The following day they reached Danbury and set fire to the town, destroying houses along with the military stockpiles. When the British troops discovered stores of whiskey, they went on a drunken rampage, looting and raping. A contemporary newspaper described the Danbury attack as, “One of the most brutal and disgraceful performances of the British Army in all the war.”
Messengers on horseback began spreading the news of the attack throughout the area. One of those messengers arrived at the Ludington home after dark. As soon as Col. Ludington heard the news, he realized that Gen. Tryon might send his British troops west, to attack Gen. Washington’s troops in Peekskill, New York. He knew he needed to muster his militia of 400 men—the only militia near Danbury—but they had just been placed on furlough after serving in the Hudson Highlands. Someone had to raise the alarm so the militia could mount a counterattack against the British troops. But the messenger who had brought the news to him was exhausted after his long ride.

Sybil had been listening, and she volunteered to summon the militia. As the eldest child, she was accustomed to taking on many responsibilities traditionally given to sons. At 9:00 p.m. on the stormy night of April 26, she set out on horseback to spread the word. As Sybil galloped from house to house, she carried a long stick in her hand and used it to bang on shutters and doors, rousing the militiamen and telling them to meet at the Ludington house at daybreak. The brave teenager rode for hours that night throughout Putnam County, traveling in a heavy rain on dark unfamiliar roads patrolled by British troops. She completed the 40-mile circuit and arrived home just before dawn.

Col. Ludington led his militia into Connecticut, and on the way he recruited additional farmer patriots to fight. When they caught up with the British troops, they mounted an attack. The militia continued fighting the troops as they retreated back to their ships at Westport. In one skirmish, Benedict Arnold (at that time, still an American patriot) was nearly killed when his horse was shot out from under him.

The action ended with many British casualties. Alexander Hamilton wrote to Col. Ludington, saying: “I congratulate you on the Danbury expedition. The stores destroyed have been purchased at a high price for the enemy.” And later, Gen. George Washington publicly hailed Sybil for her contribution. 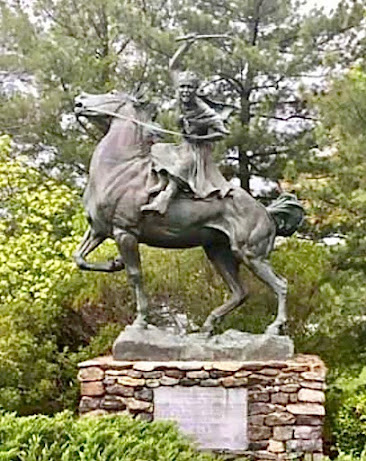 Sybil Ludington’s historic ride faded into obscurity until 1961, when the Daughters of the American Revolution commissioned sculptor Anna Hyatt Huntington to create a bronze statue of Sybil, commemorating her bravery and sacrifice during the American Revolution. It was unveiled on June 3, 1961, at Lake Glenida in Carmel, New York. 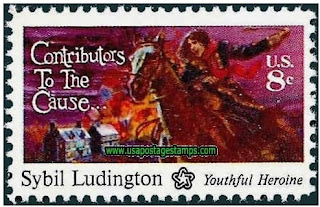 (Public Domain)
In 1975, Sybil was honored with a postage stamp for the Bicentennial, as part of the U.S. Postal Service’s Contributors to the Cause series. 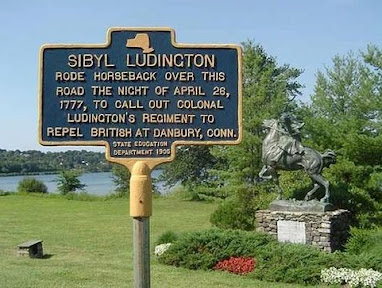 Sybil Ludington marker (Public Domain)
Some are skeptical about Sybil Ludington’s midnight ride, pointing to the lack of official records to support her story. But not Vincent T. Dacquino. This retired English teacher from Putnam County, New York became intrigued with Sybil Ludington in the mid-1990’s, after discovering the historical markers mapping the route she’s believed to have ridden. For the next twenty-five years, he did extensive research on her. He’s written two children’s books about Sybil, as well as two books for adults.

Dacquino studied documents in the Ludington family collection at the New York Historical Society in Manhattan. He found letters written in the 19th century by a niece and nephew of Sybil. These letters contain details of her ride, which were passed along by older relatives who were alive at the time.

According to Dacquino, Sybil Ludington married Continental Army veteran Edmund Ogden in 1784, and they had one son named Henry, after her father. After Edmund died of yellow fever in 1799, Sybil successfully ran a tavern as a single businesswoman for many years. In 1811, she moved to Unadilla, New York, where her son Henry opened a law practice. For the next twenty years, she lived with him and helped raise her six grandchildren. After Henry died in 1838, Sybil fell into poverty. She had applied for a Continental Army veteran’s pension in the name of her husband, but her application was rejected because she could not locate her marriage certificate.
Sybil died at the age of 77, on February 26, 1839. She was buried next to her father in the Presbyterian Cemetery in Patterson, Putnam County. (Sybil was known to have spelled her name in several ways, including ‘Sibbell,’ the way her name is inscribed on her gravestone.) 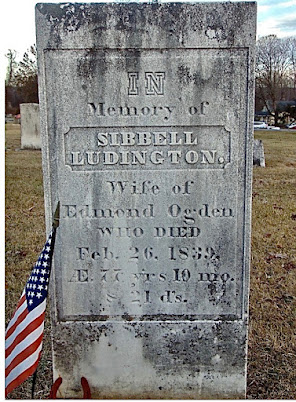 After spending years researching Sybil’s life, Vincent Dacquino concluded, “She was an amazing woman, an amazing wife, an amazing grandmother. She is a symbol of a true American woman.”
____________
Mary Dodge Allen is the winner of the 2022 Christian Indie Award from the Christian Indie Publisher's Association, and two Royal Palm Literary Awards from the Florida Writer's Association. She and her husband live in Central Florida, where she has served as a volunteer with the local police department. Her childhood in Minnesota, land of 10,000 lakes, sparked her lifelong love of the outdoors. She has worked as a Teacher, Counselor and Social Worker. Her quirky sense of humor is energized by a passion for coffee and chocolate. She is a member of the Florida Writer's Association, American Christian Fiction Writers and Faith Hope and Love Christian Writers.
Website: www.marydodgeallen.com

Mary's recent novel: Hunt for a Hometown Killer won the 2022 Christian Indie Awards, First Place - Mystery/Suspense. She will be giving away a copy of this book in the HUGE HHH giveaway!
To celebrate reaching 3 Million views, HHH is hosting a HUGE giveaway of over 60 books in 18 prizes, so there are many chances to win! One grand prize will consist of 10 books, two readers will win a second prize containing 5 books, and there will be 15 winners of a third prize containing 2 books each. There are several ways to earn entries, such as following, or commenting on the HHH blog each day. Thank you for being part of the HHH community, and best wishes in the giveaway!
http://www.rafflecopter.com/rafl/display/ce16d9c612/? 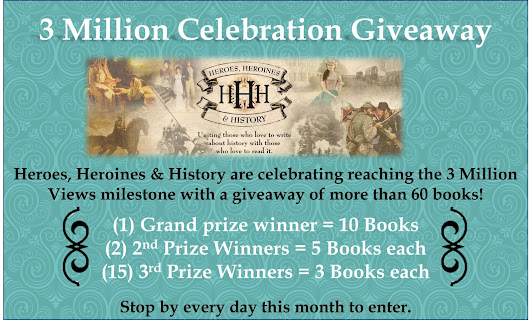 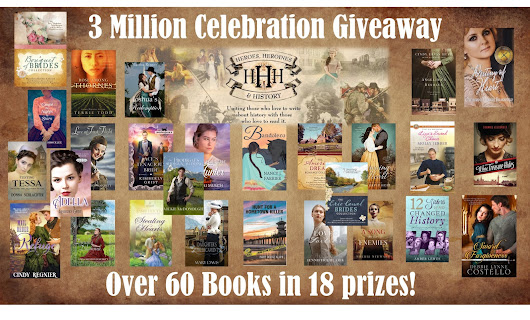 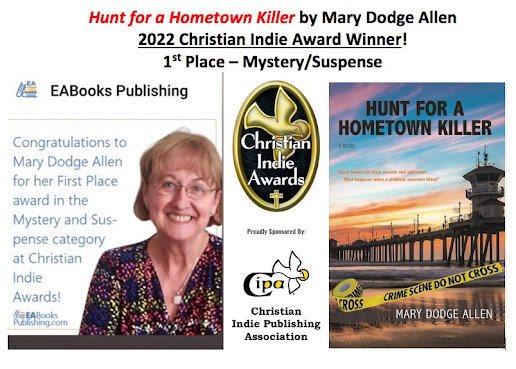