We have faced some startling and horrifying disasters in the United States but today I want to talk about one that is listed as the worst industrial disaster in our history. The facts are startling, as is the death toll. At the time, people did not realize the deadliness of the products they were dealing with or that they could cost so many lives.

In April of 1947, several ships were docked at Texas City, some waiting for cargo, some already loaded. Two of the ships, the Grandcamp and the SS High Flyer contained in their cargo hold ammonium nitrate, bound for Europe to be used on farms there.

8:00 AM – Smoke drifted up from the cargo hold of the Grandcamp. Longshoremen attempted to put out the fire with a gallon of water and a couple of fire extinguishers. The result was a hold filled with thick smoke and they had to leave. The captain ordered the hold to be sealed off and steam added to extinguish the fire without doing much damage to the cargo. The problem was that ammonium nitrate neutralized the properties of the steam rendering it useless as a fire retardant. In fact, the steam may have made matters worse by converting the ammonium nitrate to nitrous oxide and increasing the heat in the hold.

8:30 AM – The buildup of pressure increased to the point that the hatches were blown off. The yellow-orange column of smoke indicated nitrogen dioxide fumes were present. Spectators lined up along the shore, thinking they were a safe distance from the fire. The Texas City Fire Department and the Republic Oil Refining Company firefighters responded and went to the ship to put out the fire.

9:12 AM – The heat and pressure continued to increase until the ammonium nitrate exploded. The vessel detonated and the blast leveled almost 1,000 buildings on the surrounding land. Destruction and debris were in a 2,000 foot radius and half the windows in Galveston (10 miles away) were shattered. Two planes that were in the air were destroyed. More than 550 people died, although the death toll is figured at much higher than that. All but one of the Texas City Fire Team, 28 members, were killed.

1:10 PM – The explosion of the Grandcamp loosed the SS High Flyer, which then drifted across to  stop against the Wilson B. Keene. The crew was still aboard but was forced to evacuate when the smoke became too thick. Tugboats attempted to pull the High Flyer out to sea but were unsuccessful. The heat built and the High Flyer’s cargo caught fire. The resulting explosion was said to be more powerful than that of the Grandcamp, but there were fewer deaths since most had evacuated the area. The explosion destroyed the Keene, and glowing hot chunks of the Flyer rained down on the city.

Some people compared the destruction to a nuclear explosion. Many who died were never identified. Only body parts remained of some. The unknown number of deaths was due to seaman who were in port but were not registered or other undocumented laborers. More than 5,000 people were injured. Hospitals were overwhelmed by the numbers. A school became a temporary morgue where people would go to identify bodies.

The anchor of the Grandcamp, (1.8 metric ton) was found over a mile and a half away from the blast site. Another anchor (4.5 metric ton) ended up near the Texas City Dike, about a half mile away. Both are memorials now. There is also a memorial to the Texas City Firefighters who lost their lives.

What caused that initial fire in the hold of the Grandcamp? While the actual answer will never be known, most believe it was started by a worker discarding a cigarette in the hold the evening before. That cigarette smoldered until a small fire started and the result was utter destruction and a great loss of lives.

Firefighters and workers came from as far away as Los Angeles to help extinguish fires and clean up the mess. Rebuilding the area cost upwards of $100 million dollars in 1947. (That would be over one billion today.) What a sad series of events. You can look at a photographic record of the disaster here.

Have you ever heard of the Texas City Disaster? Maybe you have family that was impacted by this event. I know many of us are reminded of the Oklahoma City disaster involving ammonium nitrate and remember that devastation. My thoughts go to those who have lived through or lost someone in this type of catastrophe.

Nancy grew up on a small farm in the Midwest amidst a close-knit family. She came to love farm life including the cooking, gardening and canning, but not so much the cleaning house part. In school she often got in trouble in history class for hiding a fiction book in her text book to read during the teacher’s lecture. Nancy was shocked to later discover she had such a love for history. Now Nancy lives in Southern Arizona and loves to research and include bits of history in her books. She is a Christian and enjoys encouraging her readers in their faith. Find her at nancyjfarrier.com. 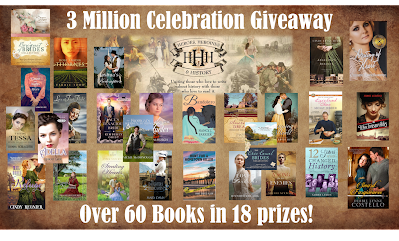