Abigail Scott Duniway: The Mother of the Western Suffrage Movement

As a writer I love reading about other writers, especially those during the era I write my historical novels. The Mother of the Western suffrage movement, Abigail Scott Duniway is one of those women. She worked tirelessly to persuade Oregon to past a Women’s Suffrage Bill. Abigail Scott was born in Groveland, Illinois, on October 22, 1834, to John Tucker Scott and Ann (Roelofson) Scott. 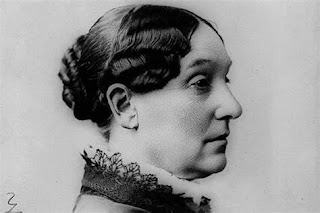 She worked on the farm along with her family, and like most farm children, attended school as time allowed. Her father organized a party of 30 to travel to Oregon. Her mother and three-year-old brother Hubert died on the trail. She taught school in Eola, Oregon before marrying Benjamin Charles Duniway, a farmer from Illinois, on August 1,1853. They had six children, two didn’t survive infancy.

She worked the land right alongside him. And until a loan her husband had co-signed for a friend defaulted and lost them their farm, she never considered the need for women to own property. Abigail was distraught that all she had worked for was taken from her because her husband could sign for the loan without her consent. 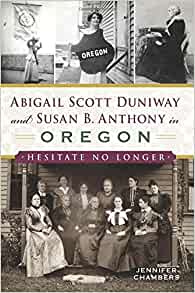 Shortly after this, her husband was permanently disabled after an accident with a runaway team. This put Abigail firmly in the position of breadwinner. She taught school for a while and then opened a millinery and notions shop. While women chose hats and looked through pattern books, they would share their injustice and mistreatment. Before these conversations she hadn’t considered how ill-treated married women were when it came to their rights to own property or inherit from their husbands. Not only was she appalled, but reminders of her own misfortune fueled her desire for change.

With the support of her husband, they moved to Portland, where in 1871 she started The New Northwest, a weekly newspaper devoted to women’s rights. She continued the paper for 16 years.

In 1872, she addressed the Oregon State Legislature on behalf of the Oregon State’s Women’s Suffrage Movement. During her years of advocating for women’s rights, she had setbacks with her health and her fiances, and even her brother Harvey W. Scott, who edited The Oregonian, wrote editorial opposing women’s suffrage. Abigail never gave up despite local resistance, political obstacles, the failure of the women’s suffrage referendums on state ballots and divisions with eastern suffrage organizations.

Western women wanted the same rights as men to own property and vote. They had labored alongside their husbands to build the west and felt it only right as pioneers they should share equally the benefits with men. Eastern suffragettes insisted women were superior to men and demanded equal rights through less peaceful methods. This radical difference often stirred up more trouble for those in the west, slowing the fight to persuade male dominated legislature to pass women’s rights laws. 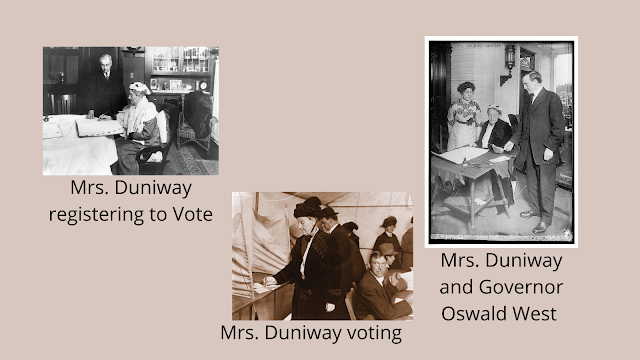 She and her newspaper supported the Sole Trader Bill and the Married Women’s Property Act. When they passed, it gave women in Oregon the right to own and control property. Through her perseverance Oregon was the seventh state to pass a Women’s Suffrage Amendment in 1912. Oregon Governor Oswald West honored her by asking that she write the amendment. Mrs. Duniway was the first woman to register to vote in Multnomah County.

Along with editing The New Northwestern, she wrote fiction. In 1859, her debut novel Captain Gray’s Company; or, Crossing the Plains and Living in Oregon was the first novel ever published in Oregon. Over the years, she wrote several more novels drawing from her own experiences on the Oregon Trail. She wrote a booklet, My Musing after attending a women’s suffrage meeting. And several serialized fiction stories for The New Northwest and The Pacific Empire. Her last book, Path Breaking: An Autobiographical History of the Equal Suffrage Movement in the Pacific Coast States was published in 1914. She died in Portland, Oregon in 1915 at the age of 80.

Have you read about Abigail Scott Duniway or other women in the suffrage movement?

Cindy Ervin Huff is an Award-winning author of Historical and Contemporary Romance. She loves infusing hope into her stories of broken people. She is addicted to reading and chocolate. Her idea of a vacation is visiting historical sites and an ideal date with her hubby of almost fifty years would be live theater. Visit her website www.cindyervinhuff.com 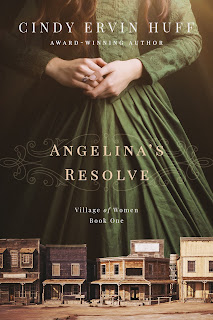 Angelina’s Resolve: Book 1 of Village of Women Proving her skills are equal to a man’s may cost her more than she ever imagined.