So many are familiar with the famous Lewis & Clark duo and the exploration of the western half of the U.S. Did you know the Clark family had TWO famous explorers and pioneers? If you missed last month's post, you can read it here.

Today, let's take a trip underground into the longest cave system in the world!

Have you ever explored a cave anywhere in the U.S. or perhaps in another country? Growing up, the most famous one for me was Luray Caverns in Virginia. Commercials everywhere featured that destination. Once I married and moved to Colorado, the Cave of the Winds in Manitou Springs was the place to see. Now, here in Kentucky, I learned about Mammoth Cave, which is just a little under 2 hours away from me. Well, at least the main entrance is, anyway. :)

With over 412 miles of mapped tunnels stacked on top of each other in five (5) levels, plus another 600 miles suspected to have not even been mapped yet, this cave is rather aptly named, don't you think? It's not known exactly how deep the cave goes, but the cleared tunnels welcome over 500,000 visitors every year. The greater majority of those miles wouldn't be known without the cartographical knowledge of Stephen Bishop, an enslaved spelunker, who was sent into the mines in the 1830's to explore and map the passageways.

Bishop was owned by a lawyer named Franklin Gorin, who had purchased the mine in 1838 with the goal of turning it into a tourist attraction. I won't go into all the details, but Gorin represented a couple during divorce proceedings, and he acquired Stephen Bishop as partial payment for his legal fees. He then leased two other men (Mat Bransford and Nick Bransford, no relation) from their owner to help with the exploration. Prior to all this, the cave was mined for nitrates to be converted into saltpeter and used in ammunition during the War of 1812. 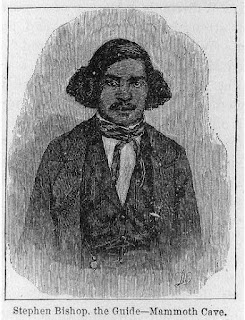 Bishop quickly became an expert in the mine and he, along with the two Bransford men, started giving tours. These three slaves could call their own shots down in the caves, and they could be as free as they desired, interacting with social elites and travelers from all over the world. Gorin only owned the mine for one year before selling it to John Croghan, nephew of William Clark of the Lewis & Clark fame. Croghan spent a lot money fixing up the area in front of the cave. He repaired roads, improved existing buildings, and built a hotel.
Now, people could travel from all over, stay at the hotel, and be led on tours inside the cave. Bishop and the two Bransfords became quite well-known, and Bishop absorbed everything he learned from those who took his tours. From a young man of 17 who could barely write his own name in block letters to a man who could speak some Greek and Latin, read and write, and knew so much about geology that visiting scientists picked his brain for information, Bishop became synonymous with Mammoth Cave. He led tours for twenty years and guided famous people like opera singer Jenny Lind (some might know of her from The Greatest Showman) and Ralph Waldo Emerson.
Mammoth Cave boasts over 130 species of wildlife and every type of cave formation, including gypsum flowers. Some of the areas Bishop explored are frightening to visit even today, and we have modern lighting! You can imagine what it might have been like nearly 200 years ago with just a lantern and some rope.
Caverns, tunnels, black pits, and underground rivers. It was dangerous work exploring a complex honeycomb filled with sinkholes, cracks, fissures, boulders, domes and underwater springs. Areas named Fat Man's Misery, Tall Man's Misery, and Great Relief Hall and bodies of water named Lake Lethe, River Styx and Echo Rivers.
I could continue with a lot more, but if you're interested, do a search on Mammoth Cave history and Stephen Bishop. You won't be disappointed!

* What caves or caverns have you visited? Which ones would you like to visit? Or are you claustrophobic, and the mere thought of venturing into a cave sends you into a fit of vapors? :)

* Who is a lesser-known hero in *your* area that might deserve bigger notice than the history books have granted?

* Are there any "geological wonders" in your state?

Leave answers to these questions or any comments you might have on this post in the comment box below. For those of you who have stuck around this far, I'm sending a FREE autographed book to one person each and every month from the comments left on this blog. You never know when your comment will be a winner!

Come back on the 9th of October to learn about Simon Kenton, a man who saved Daniel Boone's life!
For those interested in my "fictional" life as an author and industry news about other authors, subscribe to my quarterly newsletter. Receive a FREE omitted chapter from my book, A Grand Design, just for subscribing!

Tiffany Amber Stockton has been crafting and embellishing stories since childhood, when she was accused of having a very active imagination and cited with talking entirely too much. Today, she has honed those skills to become an award-winning, best-selling author and speaker who is also an advocate for literacy as an educational consultant with Usborne Books. She loves to share life-changing products and ideas with others to help improve their lives in a variety of ways.

She lives with her husband and fellow author, Stuart Vaughn Stockton, along with their two children, two dogs, and four cats in Kentucky. In the 20 years she's been a professional writer, she has sold twenty-six (26) books so far and is represented by Tamela Murray of the Steve Laube Agency. You can find her on Facebook and GoodReads.
Posted by Tiffany Amber Stockton at 1:00 AM