Last month, we learned about Stephen Bishop and Mammoth Cave, the longest cave system in the world! If you missed last month's post, you can read it here.

Today, it's time to spotlight another Kentucky pioneer.

Back in August, I talked about George Rogers Clark here on the blog and shared about his younger brother of Lewis & Clark fame. Simon Kenton is also connected to the older Clark through their time spent together when they went on the peaceful attack of the British military outposts and Indian settlements in what is now present-day Illinois. While the Revolutionary War battles were being fought all throughout the existing colonies, many other men were also risking their lives in the battle for more land to expand the United States.
People like Simon Kenton aren't as known as Daniel Boone, Davy Crockett, or Lewis & Clark, yet their contributions are no less important. Simon was a big bear of a man and survived many ordeals that would have broken or killed other men. His size and ability to withstand pain earned him a great deal of respect. Although Kenton's life began as an illiterate worker on his father's farm in Virginia, he got involved in a jealous fight in 1771 over a woman at the age of 16 and fled, fearing he had killed a man. The love of a beautiful woman can drive men to do some pretty dumb things. *winks* Changing his last name to Butler to avoid being found, he spent the next few years living off the land and exploring the beautiful country in and to the west of the Appalachians. 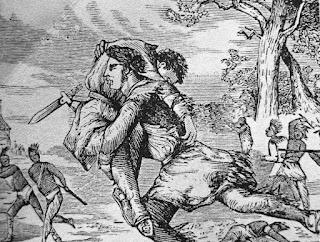 While serving four years as a scout for settlers against the Shawnee natives, Kenton moved throughout West Virginia and eastern Kentucky, finally settling in Boonesborough. In 1777, the Shawnee attacked the fort there, and Daniel Boone suffered a gunshot to the leg. Boone would have died from being scalped by a tomahawk, but Kenton saved his life. Simon charged the scalper and shot him, then hefted Boone into his arms and carried the man to safety. Boone complimented him saying, "You behaved like a man today. Indeed, you are a fine fellow." Ahh, a high compliment from Daniel Boone!
The next year, Kenton was captured by the Shawnee, held prisoner for a year, traded to the British, then quickly freed again. He returned to service under George Rogers Clark and resumed scouting or leading families to new settlements in both Kentucky and Ohio for the next ten years. Simon also discovered the man he thought he'd killed never actually died, so he resumed using Kenton as his last name. 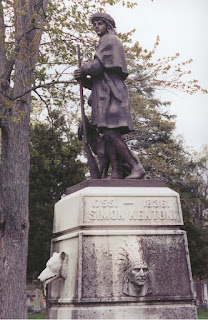 The only other claim to fame Kenton had was serving as a scout in the War of 1812 and leading a militia group in the Battle of the Thames in 1813. If you're like me, this battle isn't very familiar, but maybe the name Tecumseh is. He was a famous Indian chief, and he died at this battle. Kenton was charged with identifying the chief's body, but pointed to another warrior instead to spare Tecumseh's body from being marred or dismantled and sold as souvenirs. Ugh! And the natives were the ones being called barbarians!
I guess I should also mention Simon had a pretty bad temper. Look what he did at age 16, fighting over that girl! That wasn't the end of it, either. Later, he got into a brawl with future president, Andrew Jackson. There were a lot of people who considered him a big bully.
For the rest of his life, Kenton continued to lead families into Ohio while also living a relatively peaceful existence. He married twice after his first wife died and had ten children altogether. He never did learn to read, but he *was* able to sign his name. Oh, and I just noticed his birthdate. My older brother shares the honor of that same day, April 3rd, and my daughter was born the day before. :)

* What do YOU remember from history classes that covered anything taking place in the Ohio Valley? This would be anything including the present-day states of Ohio, Indiana, Illinois, Kentucky, Tennessee, Alabama, and Mississippi.
* Would you rather be a scout throughout the frontier, or a prisoner of the Shawnee and forced to adapt their ways while living amongst them? Why?
* Do you share a birthday with anyone of notable fame or recognition? Other than yourself, of course? :) Who is it?
Leave answers to these questions or any comments you might have on this post in the comment box below. For those of you who have stuck around this far, I'm sending a FREE autographed book to one person each and every month from the comments left on this blog. You never know when your comment will be a winner!
For those interested in my "fictional" life as an author and industry news about other authors, sign up for my quarterly newsletter. The next issue will be sent on November 15th. Receive a FREE omitted chapter from my book, A Grand Design, just for subscribing!
Come back on the 9th of November to learn about Kit Carson in Kentucky *and* Colorado.
BIO