The Unsolved Mystery of the Amber Room

Stealing paintings, jewels, or artifacts from a museum or a private home shouldn’t be easy. Yet it often happens and, as we’ve seen in this series, many of those thefts remain unsolved.

But how do thieves successfully steal the Eighth Wonder of the World and conceal the boon from that theft for almost eighty years?

Type “Eighth Wonder of the World” into your favorite internet search engine, and you’ll find all kinds of items vying for that title. Here are just a few:

None of those have been stolen!

The same can’t be said about the infamous and mysterious Amber Room, perhaps history’s most baffling unsolved theft.

The Amber Room is exactly that—a chamber decorated with panels made of amber which is fossilized tree resin which is valued both as a golden gemstone and a folk medicine.

This unique creation was designed in the early 1700s by Andreas Schluter, a German baroque sculptor, and Gottfried Wolfram, a Danish amber craftsman. Their work was later continued by two other amber craftsmen, Gottfried Turau and Ernst Schacht.

After several renovations took place, the 13,000 pounds of amber covered about 590 square feet.

Nazi soldiers dismantled the panels and took them to Königsberg, a historic Prussian city now known as Kaliningrad, Russia. When the Allied Forces neared Germany in early 1944, the panels were crated and stored in a basement. Allied bombers struck Königsberg in August 1944, destroying the castle, cathedral, churches, and universities. But the crates weren’t found.

And that’s the last we know of the whereabouts of the Amber Room except for a sketchy report that the panels were boarded onto German military transport ship which was torpedoed by a Russian submarine in January 1945.

Another theory is that the Red Army took possession of the amber after taking control of Königsberg.

Here’s one more possibility—in October 2020, Polish divers found the wreck of the SS Karlsruhe, a ship that sailed from Königsberg in 1945 as part of an evacuation effort. Apparently, “the wreck holds many crates with unknown contents” (The Guardian).

Could any of the Amber Room panels be stored in those crates?

For now, almost eighty years after the burning of Königsberg, the location of those 13,000 pounds of amber remains a mystery. 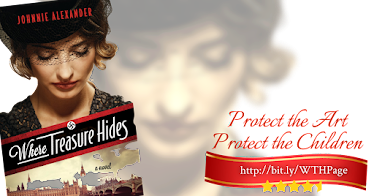