What is Remembrance Day?

On the eleventh hour of the eleventh day of the eleventh month of 1918, the First World War officially ended with the signing of the armistice agreement. Originally called “Armistice Day,” this day was first observed in 1919 throughout the British Commonwealth.

From 1921 to 1930, Armistice Day was held on the Monday of the week in which November 11 fell. In 1931, the House of Commons changed its name to “Remembrance Day” and set it for November 11 every year thereafter. The United States used to commemorate Armistice Day on November 11. In 1954 they changed the name to Veterans Day.

As a girl in elementary school, I recall standing in the assembly hall for this occasion every November 11. We’d wear poppies, sing O Canada and Oh God, Our Help in Ages Past. We’d spend a full interminable minute in silence, staring at our shoes. Wreaths would be laid. One of the older students would recite John McCrae’s poem, In Flanders Fields. We might have had a bugler or trumpeter play The Last Post if our small community had had one. A veteran or two would say a word. We’d close with the singing of God Save the Queen. Then we’d get to go home for the remainder of the day. If we were lucky, there’d be snow to play in. 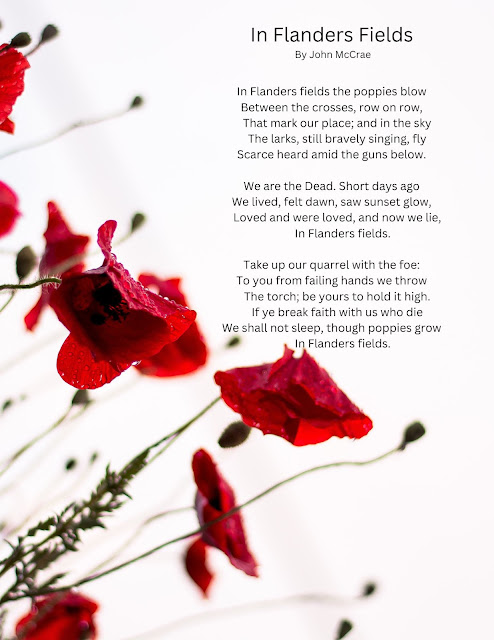 To me, it seemed an event about old men. Now I realize that most of my community’s WWII vets, like my father, were only in their forties at the time. Now that I’m a mother of adult sons and a daughter who did a short military stint, I see it all through a completely different lens. 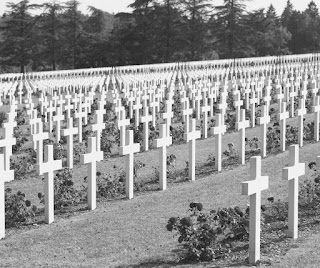 Canada’s national ceremony is held at the National War Memorial in Ottawa, with the Governor General of Canada presiding. The televised ceremony is also attended by the Prime Minister, other government officials, representatives of Veterans’ organizations, other dignitaries, veterans, as well as the general public. Usually, a children’s choir sings. When I hear them, I’m transported back to that elementary school assembly with the somber adults and the mysterious traditions that now mean a whole lot more.

Terrie Todd is the award-winning author of four historical and two split-time novels. Rose Among Thornes won the 2022 Word Award for best cover and the Debra Fieguth Social Justice award. The Last Piece won The Word Guild’s best contemporary novel award. Her next book, Lilly’s Promise, releases next month. Terrie lives with her husband, Jon, in Portage la Prairie, Manitoba, Canada where they raised their three children. They are grandparents to five boys.

From soup explosions to fearsome medical procedures, from the stories behind our favorite Christmas carols to meeting a first grandchild, Terrie Todd’s popular “Faith and Humor” column has been encouraging and amusing readers of The Graphic Leader for ten years. This book celebrates a decade of wit and wisdom found in Terrie’s hand-picked favorites. Arranged by category, Out of My Mind could be called a weirdly out-of-order memoir of a life in which faith and humor dwell hand in hand. Categories include: Faith, Marriage & Family, The Writing Life, Health & Fitness, Easter, Mother’s & Father’s Day, Thanksgiving, Remembrance Day, Christmas. Out of My Mind makes a great gift for any occasion.