FROM WHENCE DID THE CRANBERRY COME & “RECIPE” 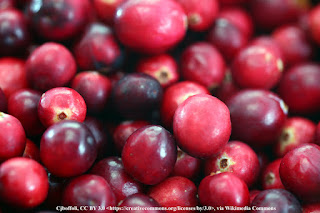 Cranberry sauce from a can or made fresh? Which do you serve? I always served from a can, until my daughter started taking culinary classes in high school and asked if she could make fresh cranberry sauce. It was delicious. So when she’s around, we have fresh cranberry sauce goodness. When it’s just me cooking, I wield the can opener. It wasn’t until 1912 that we could have this commercially processed goodness, but cranberries were popular long before they were canned.

Cranberries are one of the few fruits native to North American and were a staple for the Native Americans. The Lenni-lenape called them Pakim meaning bitter berry. They were a symbol of peace and friendship. The Chippewas word for them is a’ni-bimin, the Narragansetts’ is sasemineash, and the Algonquin referred to them as atoqua. The fruit was used for a variety of things, like remedies, foods, drinks, and fabric dyes. They used them in an energy-bar type of food called pemmican. 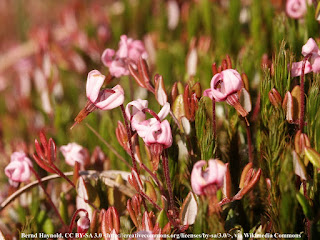 Early American settlers called them “craneberries” because the flower resembled the head of a sand crane. It is said that the Pilgrims were given them at the first Thanksgiving. Each year, one-fifth of all harvested cranberries are eaten on Thanksgiving.

Back in the day, barrels of cranberries were kept aboard clipper ships to help prevent scurvy.

There are many references and mentions of cranberries from 1550 through the present, with cranberry dishes showing up in cookbook after cookbook. Barrels of berries and plants were shipped back to England, and cranberry dishes became as delicacy in some parts of Europe. The Harvard University commencement dinner in 1703 served cranberries.

Revolutionary War veteran Captain Henry Hall came across wild cranberries on Cape Cod and became the first person to successfully cultivate them. The commercial cultivation of these tart berries started in 1816 in the U. S.

Attorney Marcus L. Urann revolutionized the cranberry industry when he bought a cranberry bog and canned the fruit in 1912. In time, he established a cranberry cooperative that went on to be renamed Ocean Spray. By 1940, he had canned the gelatinous log of cranberry sauce we know and love today.

What is your favorite cranberry dish?

Mine is what I call Cranberry Delight. Basically, chocolate covered fresh cranberries. 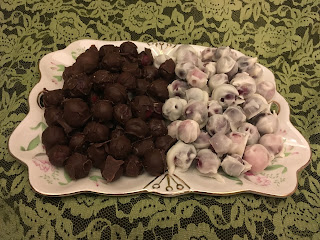 They are simple to make. Wash the cranberries and allow them to dry completely. Melt any kind of candy coating chocolate. Coat a handful of cranberries at a time and put them on wax paper to cool until the chocolate hardens. My favorite is white chocolate. The tartness of the cranberry with the sweetness of the chocolate is oh so tasty. You can read my more in-depth directions and see pictures HERE. https://marydavisbooks.blogspot.com/2021/11/tuesday-tidbits-cranberry-delight.html

Do you prefer your cranberry sauce with or without chunks? 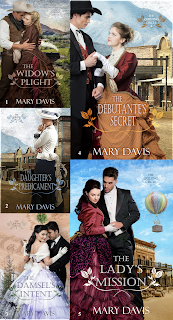 (Book1) – Will a secret clouding a single mother’s past cost Lily the man she loves?

NEW RELEASE!!! THE LADY’S MISSION (Book5) – Will Cordelia abandon her calling for love?

MARY DAVIS, bestselling, award-winning novelist, has over thirty titles in both historical and contemporary themes. Her latest release is THE LADY’S MISSION. Her other novels include MRS. WITHERSPOON GOES TO WAR, THE DÉBUTANTE'S SECRET (Quilting Circle 4) THE DAMSEL’S INTENT (Quilting Circle 3) is a Selah Award Winner. Some of her other recent titles include; THE WIDOW’S PLIGHT, THE DAUGHTER'S PREDICAMENT, “Zola’s Cross-Country Adventure” in The MISSAdventure Brides Collection , Prodigal Daughters Amish series, and "Bygones" in Thimbles and Threads. She is a member of ACFW and active in critique groups.
Mary lives in the Pacific Northwest with her husband of thirty-eight years and one cat. She has three adult children and three incredibly adorable grandchildren. Find her online at: