Welcome to our last blog post in this series. I’ve enjoyed exploring the history of words with you. Today’s batch covers words that define secrets, commitment, and incessant noise. 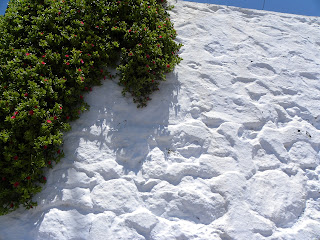 People have covered up uncomfortable realities for a long time, it seems. The figurative sense dates from 1762. This term has both literal and figurative meanings. To whitewash a building or fence is to cover it with a solution of slaked lime or chalk and water. Sometimes other ingredients are added. Whitewash glosses over imperfections and creates a shining white surface. The effect, however, is temporary. It’s not hard to see how the slang term emerged from the traditional practice. To whitewash a matter is to gloss over or hide an ugly truth. However, secrets have a way of coming out.

Historical Reference: You may recall Tom Sawyer using reverse psychology to trick his friends into whitewashing a fence for him in The Adventures of Tom Sawyer by Mark Twain (1876).

Tom wheeled and suddenly said: “Why, it’s you, Ben! I warn’t noticing.”

“Say—I’m going in a-swimming, I am. Don’t you wish you could? But of course

Tom contemplated the boy a bit, and said: “What do you call work?”

Tom resumed his whitewashing, and answered carelessly: “Well, maybe it is and

maybe it ain’t. All I know is, it suits Tom Sawyer.”

“Well, I don’t see why I oughtn’t to like it. Does a boy get a chance to whitewash a fence every day?”

That put the thing in a new light. Ben stopped nibbling his apple. Tom swept his

here and there—Ben watching every move and getting more and more interested,

“Say, Tom, let me whitewash a while.”

Tom considered, was about to consent; but he altered his mind. “No—no—I

reckon it wouldn’t hardly do, Ben. You see, Aunt Polly’s awful particular about this

fence. I reckon there ain’t one boy in a thousand, maybe two thousand, that can

Say—I’ll give you the core of my apple.”

Tom gave up the brush with reluctance in his face, but alacrity in his heart. And

while Ben worked and sweated in the sun, the retired artist sat on a barrel in the

shade close by, dangled his legs, and munched his apple.

Example: Don’t try to whitewash that you’d rather sit in the shade than get some exercise. 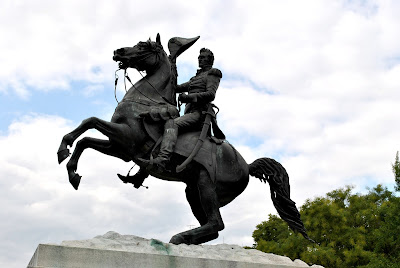 To do or believe something to the fullest possible extent is to ‘go the whole hog.’ The original form of this American slang expression, ‘went the whole hog,’ traveled eastward to the UK and other English-speaking nations. However, Americans trended more toward ‘go the whole hog.’

Theories abound as to the origin of this phrase. It may have come from butchers asking customers whether customers wished to purchase part of a pig or `go the whole hog' (buy the whole pig). However, the expression may have meant to spend a whole `hog,' or ten-cent American coin. That is, unless it referred to an Irish shilling, which went by the same nickname. The mystery remains unsolved, but I think the butcher origin is the most probable.

Historical Reference: 'Go the whole hog' first appeared in print in American newspapers starting in 1827. The phrase came into widespread use in 1828. During the election that year, Andrew Jackson’s supporters were dubbed ‘whole hog Jacksonites.’ In January 1828, “The Middlesex Gazette” printed the following: “Mr. Barbour, you know, was formerly the Speaker, but not being willing "to go the whole hog," as the Jacksonites have it, they would not permit him again to be elevated to that high station.”

Example: Rather than go camping to save money on our vacation, we decided to go the whole hog and book a hotel room. 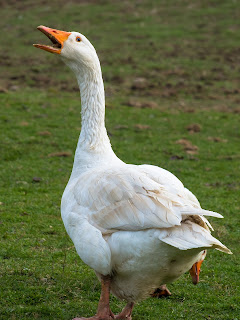 A person who yammers might utter persistent cries of distress or sorrow, whine and complain, or talk too much and/or too loudly. That’s quite a laundry list of definitions. Considering that yammer is an old term, it has had a few years to evolve.

Historical Reference: Yammer is an old term, having emerged in the late 15th-century. Meaning "to lament," it most likely came from the Middle Dutch jammeren and a related Middle English word, yeoumeren (to mourn, complain). Yeoumeren is as an alteration of the Old English geomrian (to lament). An Old Saxon word, jamar (sad, sorrowful) and the German jammer (lamentation, misery) are connected. Yammer acquired the sense of making an irritating racket from at least the 1520s.

Example: The passenger next to me wanted to yammer about politics, so I put on my headphones.

We’ve arrived at the end of our blog series. Thanks for coming along on this journey into the history of words. While the series will end, I’ll continue on as a monthly blogger. Check back next month on the twentieth, for a fun look into the history of an enduring Christmas delicacy. You’ll find the latest news about me as an author and my books, below.I’d love to know if you made any discoveries. ‘Yammer’ surprised me. Before researching this article, I only understood the word to describe excessive talking.

Finding yourself at a place where you can redefine your schedule is a rare treat. I'm in between series at the moment and thankful for the chance to breathe, reassess, and regroup before diving back in. It's exciting and a little stressful, but it's all in how you look at things. A poem I once wrote comes to mind.
Focus
by Janalyn Voigt

But in the garden flowers bloom.

I choose my world.