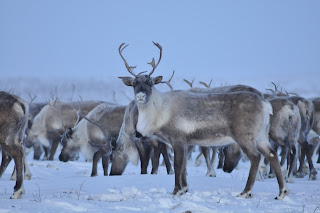 T’was two weeks before Christmas and I at my laptop
Was pondering reindeer, both flying and full stop.
When was it, thought I, that the beast became fable?
What catapulted it to sky from the stable?

A story, a poem, a coloring book?
All definitely needed a second look.
So, I proceeded to research as my deadline loomed,
And my knowledge of said reindeer bloomed and bloomed.

Remember this Christmas to look toward the moon,
For one (or eight, or nine, or ten) tiny reindeer may be flying by soon. 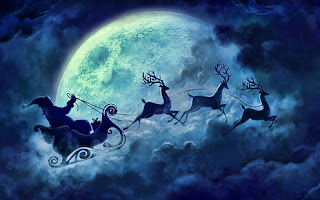 Why was it the reindeer that became legend? Why not a flying horse, goat, or dare I suggest, a flying squirrel? Okay, the last one has never typically pulled a sleigh, but it’s a fun image.
Reindeer are indigenous to Northern Europe and Asia. Norway, specifically, has the highest concentration. The thought of a flying beast may have come from their belief in the Norse god Odin who flew on a large, white, eight-legged horse named Sleipner. Odin was said to visit children. They would set out boots filled with hay and carrots for the horse. In return, Odin left them small gifts. His son Thor rode through the sky on a chariot pulled by two magical horned goats.
Could these myths have led to the thought of a magical gift giver and his sleigh?
We know that Saint Nicholas was a real person, a bishop in the early Christian church during the time of the Roman empire. His legend grew to where he rode a white horse from village to village to deliver presents to the children.
Recalling the earlier legend, the thought of a flying beast of burden infiltrated the imagination, and in the 1812 story, “Old Santeclaus with Much Delight: The Children's Friend: A New-Year's Present, to the Little Ones from Five to Twelve” a singular reindeer appeared on the pages. Thus, the thought of flying caribou was born. Written anonymously, the publisher revealed that the author had learned about reindeer from his mother who shared stories of indigenous people. 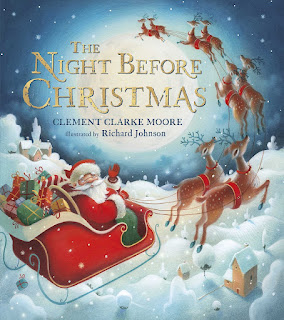 Then, in 1823, another story in poem form caught hold. “A Visit from St. Nicholas”, or more popularly, “The Night Before Christmas” by Clement C. Moore, became the anthem of children everywhere. Now, not merely one reindeer would do, but eight tiny creatures escorted St. Nicholas from house to house. This poem may also have been the first suggestion that Santa was an elf, a right jolly old one to be exact. But that’s another article for another time.
The tradition of eight reindeer stuck for seventy-nine years until it was challenged by L. Frank Baum in 1902 who suggested ten would do a better job. In “The Life and Adventures of Santa Claus,” their names were different than Moore’s offering. Baum's version was never accepted because Dasher, Dancer, Prancer, Vixen, Comet, Cupid, Dunder, and Blixem, (the latter eventually changed to Donner and Blitzen,) had become entrenched in American tradition. Those who read Baum’s book simply said, “That’s a nice story,” and returned to what they knew and loved.
It wasn’t until a marketing campaign in 1939 for Montgomery Ward department store did a new character emerge in the Christmas lexicon. Ward’s in-house advertising copywriter Robert L. May was approached to write a poem that could be included in coloring books and given away to customers when they made a purchase. He pulled from his childhood, a disturbing one where he’d been bullied, and created Rudolph, the red-nosed reindeer, and thus, a new favorite emerged. Rudolph, who had been ostracized by his peers (and even Santa himself, with which I take issue), snatched the hearts of every child who felt the same. And evidently, parents as well, for they bought all the Rudolph merch they could find. They still do 120 years later. The tiny, humble soul managed to become the ninth reindeer, and we are so much better for it.

And that's the evolution of imagination in flight.
Merry Christmas to all, and to all a good night.

A fun side note: My mother was working at Montgomery Ward at the age of eighteen when they introduced the marketing campaign. Of course, she couldn’t share that with me until I was older.
Titanic: Legacy of Betrayal
A TIME-SLIP NOVEL
A secret. A key. Much was buried on the Titanic, but now it's time for resurrection.

Kathleen E. Kovach is a Christian romance author published traditionally through Barbour Publishing, Inc. as well as indie. Kathleen and her husband, Jim, raised two sons while living the nomadic lifestyle for over twenty years in the Air Force. Now planted in northeast Colorado, she's a grandmother—and soon-to-be great-grandmother—though much too young for that. Kathleen has been a longstanding member of American Christian Fiction Writers. An award-winning author, she presents spiritual truths with a giggle, proving herself as one of God's peculiar people.