In November, Kit Carson was the focus of my monthly post, and I shared about a man from both Kentucky and Colorado, two states where I have lived most recently. If you missed last month's post, you can read it here.

Today, we're wrapping up the year's collection on Kentucky pioneers by featuring two names to close out the series.

It's no secret that settling what is now the entire United States took a lot of grit and determination, a fighting spirit against the trials and tribulations accosting nearly everyone who attempted to strike out and forge a new trail where not many dared to go. Quite a few of these tough folks lived in or came from Kentucky.
Folks like Daniel Boone, who traversed the Cumberland Gap; James Bowie, the originator of the Bowie knife; Abraham Lincoln, the 16th president of the U.S.; Stephen Bishop, the former slave turned daredevil cave explorer; the McCoy half of the most famous feudists in American history (the Hatfield's were in West Virginia); Carrie Nation, the hatchet-wielding temperance advocate; Judge Roy Bean, iconic judge in the Old West; and even a guy named Muhammed Ali. 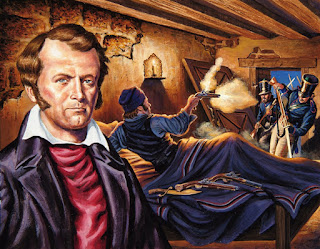 James Bowie was born in Mason County, Kentucky, but his family soon emigrated to Missouri and then Louisiana by the time Jim was 6 years old. So, although Kentucky was his birthplace, he was primarily raised in Louisiana. After clearing land and cutting timber for a living, plus operating a sugar plantation, he reportedly killed a man in a duel and fled to modern-day Texas, which was owned by Mexico at the time.
Jim befriended the Mexican vice governor, assumed Mexican citizenship, and married the man's daughter. It didn't take long before the fight by the non-Mexicans against the Mexicans drew Bowie's interest, and he joined the cause which eventually took him to the fight at The Alamo, where he led the Texas Army. He had fought with distinction in several battles prior to that, but unfortunately, an illness made Jim bedridden, and he died along with the other gallant fighters, Davy Crockett and William B. Travers. 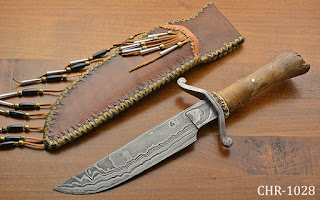 Bowie’s daring and courageous acts have become immortalized through Western song and ballad. You might also be familiar with his name in association with the Bowie knife, a weapon invented by either him or his brother Rezin. I chuckled when I read the knife has also been called an "Arkansas toothpick." A toothpick that's 10 inches long and 2-1/2 inches wide, with a 5-inch handle? Certainly wouldn't want to pick your teeth with *that* blade!
* * * * * 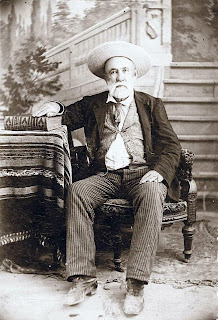 There is an abundance of stories and tales out there about Judge (Phantley) Roy Bean (Jr.). Described as having the looks and charm of Adonis, he was known for being a gambler, a duelist, and a rake with the ladies. He even repeatedly embellished his story about being imprisoned and visited by some of his paramours, who slipped him some knives tucked inside some tamales, and said he used the knives to dig through the concrete walls to escape. Crazy, right? Yet that story prevailed.
Born in Kentucky as the youngest of 5 children with two older brothers, he struck out and headed west at 15. After joining his brother Samuel on a wagon train headed for New Mexico, Roy escaped a mob after killing a man in a duel and ended up in San Diego with his other brother Joshua, who had become a prominent businessman and was elected mayor in 1850. 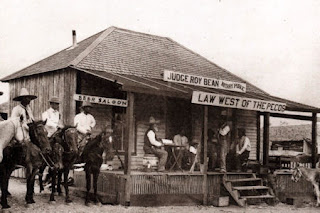 Bean's rabble-rousing eventually caused him to again flee after Joshua died, and he spent about 10 years living with Samuel in New Mexico before ending up in San Antonio during the Civil War. He married and worked various jobs, becoming known for finding creative ways around business competitors and the law. By the 1880's, he and his wife had separated, and he ended up near the Pecos River, where a Magistrate was needed, so he volunteered and became "the only law west of the Pecos." Ironic that a man who often circumvented the law was now in charge of enforcing it.
Due to his eccentric judicial antics and things like pocketing the monetary fines he assessed as "judge," he managed to cement his reputation as he carried out his odd manner of justice. Word of him spread, and there have been movies made and books written about him. With his low level of morality, I'm more inclined to consider him an "infamous" judge more than anything else. :)
NOW IT'S YOUR TURN:

* What name from dime novels or Old West lore stands out in your mind, and why?
* Have you ever held a Bowie Knife? Do you own one? If yes, how have you used it?
* What was something new you learned from today's post?
Leave any comments or answers to any of these questions you might have on this post in the comment box below. For those of you who have stuck around this far, I've been sending a FREE autographed book to one person each and every month from the comments left on this blog. You never know when your comment will be a winner! So, post away!
Come back on the 9th of January in the new year to learn about some well-known colloquial sayings from American history.
For those interested in my "fictional" life as an author and industry news about other authors, subscribe to my quarterly newsletter. Receive a FREE omitted chapter from my book, A Grand Design, just for subscribing!

Tiffany Amber Stockton has been crafting and embellishing stories since childhood, when she was accused of having a very active imagination and cited with talking entirely too much. Today, she has honed those skills to become an award-winning, best-selling author and speaker who is also an advocate for literacy as an educational consultant with Usborne Books. She loves to share life-changing products and ideas with others to help improve their lives in a variety of ways.
She lives with her husband and fellow author, Stuart Vaughn Stockton, along with their two children, two dogs, and two cats in Kentucky. In the 20 years she's been a professional writer, she has sold twenty-six (26) books so far and is represented by Tamela Murray of the Steve Laube Agency. You can find her on Facebook and GoodReads.
Posted by Tiffany Amber Stockton at 3:30 AM