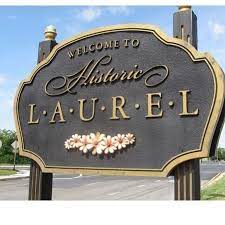 Today is our last stroll through my native state of Maryland. I hope you’ve enjoyed the journey as much as I have. For this last post, we’ll be visiting the town of Laurel where my recent release, Estelle’s Endeavor, is set. Laurel also happens to be where my mom was born, and I’m pleased to be honoring her in this small way. If you missed last month’s post about the Central Region, you can visit it here: https://www.hhhistory.com/2022/11/maryland-my-maryland-part-5.html.

Laurel’s beginning hearkens back into the 1600s when the Calverts arrived, then a short time later a man named Richard Snowden who was known as “The Immigrant.” He was a wealthy Welshman who served under Cromwell before coming to Maryland. He and his descendants would continue to find success in the fledgling colony, first in the iron business, then with textile mills.

On April 4, 1870, Governor Oden Bowie signed the Act that incorporated “Laurel Factory” as a town, so named for the copious mountain laurel trees and manufacturing facilities in the area. Five years later, the town dropped “Factory” from its name.

Because of its proximity to the fall line of the Patuxent River, Laurel was the perfect location for mills. A stone flouring mill was constructed in 1811, then converted to the production of cotton duck in 1824. The Patuxent Manufacturing Company followed in 1835, then Avondale Mill in 1845. As a mill town, the population exploded, and a building boom followed as over 700 workers and their families descended upon the area.

Like much of Maryland, Laurel was divided during the Civil War. Union soldiers patrolled the railroadand there was a Union hospital that was associated with a larger facility in Annapolis, but the town had its share of Southern sympathizers. After the war, the community continued to grow and was the site of several firsts for Prince George’s County: first public library, first public high school, and first national bank (Citizens National Bank where my grandfather banked until he passed away in 1991). The town also is home to the oldest continuously operating volunteer fire department (started after a devastating that occurred in 1899).

The Laurel Sanitarium opened in 1905 on a 163-acre farm, and in 1911, the Laurel Park Racetrack was constructed. Still operating today as an important thoroughbred horse racing venue, the track also hosted harness racing from 1948 to 1990. In February 1913, Rosalie Gardiner Jones led a Suffrage hike through the town on her way to see President-elect Wilson.

By World War I, the cotton mill had closed, so it was used as a staging area for soldiers from Fort Meade (where my mother worked as a secretary in the early years of her marriage, and where a young Lt. Dwight D. Eisenhower was stationed. As with the rest of the country, the Depression hit Laurel hard. Stores shut their doors and families moved in together. Stories abound about the hobos that got off the train to ask for food or clothing.

Fort Meade came into play again during WWII, and the town and its residents were deeply involved in wartime activities. The Laurel Women’s Club sold war bonds and stamps from the lobby of the Laurel Theatre, and a large USO facility located on Lafayette Avenue served thousands of troops. The city held blackout drills, and the cupola at the top of the high school was converted to an air raid observation post where more than fifty residents took turns working as plane spotters.

Today, Laurel is home to more than 25,000 residents as well as several Department of Defense facilities such as Fort Meade, NSA, and Johns Hopkins Applied Physics Laboratory, a far cry from its humble beginnings. Click here to take a walking tour.
_________________

Will a world at war destroy a second chance at love?

Estelle Johnson promised to wait for Aubry DeLuca, but then she receives word of his debilitating injuries. Does she have the strength to stand by him in his hour of need?

Aubry DeLuca storms the beaches at Normandy, then wakes up in the hospital, his eyes bandaged. Will he regain his sight? Will the only woman he’s ever loved welcome him home or is he destined to
go through life blind and alone?
Purchase Link: https://amzn.to/3yMc1QQ

Linda Shenton Matchett writes about ordinary people who did extraordinary things in days gone by. A volunteer docent and archivist for the Wright Museum of WWII, Linda is a former trustee for her local public library. She is a native of Baltimore, Maryland and was born a stone’s throw from Fort McHenry (of Star Spangled Banner fame). Linda has lived in historic places all her life, and is now located in central New Hampshire where her favorite activities include exploring historic sites and immersing herself in the imaginary worlds created by other authors. Learn more about Linda and her books at http://www.LindaShentonMatchett.com
Posted by Linda Matchett at 12:30 AM