Did you know that the Christmas carol, “I Heard the Bells on Christmas Day” is based on a poem written by Henry Wadsworth Longfellow in 1863, while he was in the midst of despair? 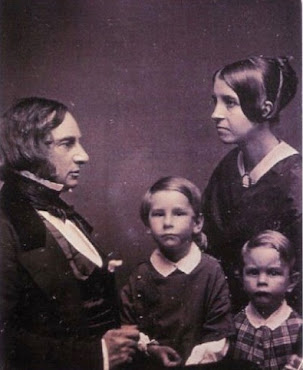 Henry Wadsworth Longfellow with his wife Fanny and two of their six children (Public Domain)
Henry Wadsworth Longfellow, born in Portland, Maine in 1807, achieved success and fame as a Harvard professor of Literature and as a published writer. But in 1861 when he was 54, his life was forever changed by a tragic fire that erupted in his home. Henry’s second wife, Fanny had been sealing envelopes with hot wax, when her dress suddenly caught fire. Henry rushed over and managed to smother the flames, but he was unable to save his beloved wife.

Henry was so badly burned; he couldn’t attend his wife's funeral. His eighteen-year marriage to Fanny had been filled with happiness, and her loss triggered a deep depression. But Henry was no stranger to grief. In 1835 when he was 28, his first wife Mary died while they were traveling in Europe, the year before he began teaching at Harvard.
Besides leaving emotional scars, the tragic fire had etched disfiguring scars on Henry’s face. To disguise them, he grew a beard and began wearing his hair longer. Before the fire, Henry had been clean-shaven and well-groomed. The change in his appearance shocked his friends, especially when his disheveled hair and long beard turned grey. 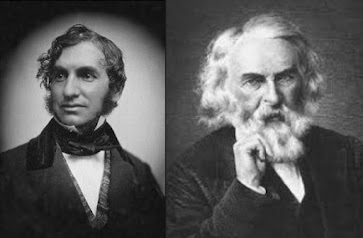 L-R: Henry Wadsworth Longfellow before; and a few years after the fire (Public Domain)

In 1863, while the Civil War was raging, Henry’s oldest son, Charles, age 17, ran away and enlisted in the Union Army. In late November of that year, Charles was severely wounded in battle. A bullet pierced his shoulder, passing within an inch of his spinal cord. The doctors told Henry that his son had narrowly avoided paralysis, and his recovery would take months. In mid-December, as soon as Charles could be moved, Henry took him home to Cambridge. 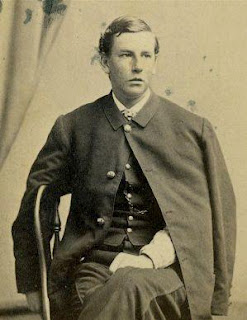 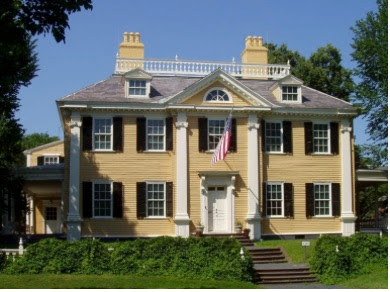 On Christmas Day 1863, Henry sat at home in Cambridge, weighed down with the burden of his lingering grief for Fanny, his worry about Charles, and his despair about the death and destruction caused by the ongoing Civil War. Suddenly, the loud ringing of church bells broke through his gloomy thoughts. The clear melodic tones of Christmas carols lifted Henry’s spirits and filled him with renewed hope, as his thoughts turned to the birth of Jesus. Henry, a devout Christian, was so moved by this experience, he sat down and penned the poem, “Christmas Bells,” which was published in a magazine in 1865. 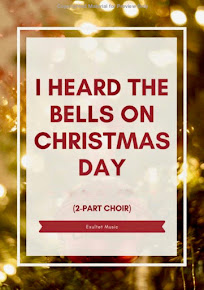 Sheet Music (Public Domain)
In 1872 this poem was set to music by John Baptiste Calkin, to the melody “Waltham.” Two of Henry’s original stanzas referring to the Civil War were omitted from the resulting Christmas carol, “I Heard the Bells on Christmas Day.”
In the 1950’s, an updated musical version of this carol, set by Johnny Marks, was performed by famous singers like Frank Sinatra and Bing Crosby. This updated carol has also been recorded by recent groups, like Casting Crowns.

Below is the original poem written by Henry Wadsworth Longfellow. The two omitted Civil War stanzas are marked with ** (double asterisks).
Christmas Bells
I heard the bells on Christmas Day
Their old, familiar carols play,
And wild and sweet
The words repeat
Of peace on earth, good-will to men!

And thought how, as the day had come,
The belfries of all Christendom
Had rolled along
The unbroken song
Of peace on earth, good-will to men!

Till ringing, singing on its way,
The world revolved from night to day,
A voice, a chime,
A chant sublime
Of peace on earth, good-will to men!

**Then from each black accursed mouth
The cannon thundered in the South,
And with the sound,
The carols drowned
Of peace on earth, good-will to men!

**It was as if an earthquake rent
The hearth-stones of a continent,
And made forlorn
The households born
Of peace on earth, good-will to men!

Then pealed the bells more loud and deep:
“God is not dead, nor doth He sleep;
The Wrong shall fail,
The Right prevail,
With peace on earth, good-will to men.”

Like Henry Wadsworth Longfellow, many of us have experienced illness, grief and perhaps even depression. At times the world around us can seem lonely and bleak, filled with suffering and conflict. These feelings can overwhelm us, especially during the holiday season.

But on that Christmas Day in 1863, when the church bells began ringing the sweet, lovely melodies of familiar carols, Henry’s thoughts turned from despair to hope... celebrating the birth of Jesus... Immanuel... God with us.
_____________

Mary Dodge Allen is the winner of a 2022 Christian Indie Award, a 2022 Angel Book Award, and two Royal Palm Literary Awards (Florida Writer's Association). She and her husband live in Central Florida, where she has served as a volunteer with the local police department. Her childhood in Minnesota, land of 10,000 lakes, sparked her lifelong love of the outdoors. She has worked as a Teacher, Counselor and Social Worker. Her quirky sense of humor is energized by a passion for coffee and chocolate. She is a member of the Florida Writer's Association, American Christian Fiction Writers and Faith Hope and Love Christian Writers.
Website: www.marydodgeallen.com

Link to Mary's Podcast on Sarah Hamaker's show: "The Romantic Side of Suspense"
https://sarahhamakerfiction.com/2022/04/05/why-mary-dodge-allen-sets-her-books-in-florida-episode-61/
Posted by Mary Dodge Allen at 3:30 AM