In December, I wrapped up a year of featuring Kentucky frontiersman and notable settlers. If you missed last month's post, you can read it here.

Today, it's a stroll down the language lane of history with some catch phrases coined for specific times, but they have since developed a meaning slightly different than originally intended. 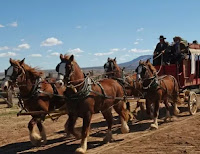 The best seat in the car is shotgun — AKA the front passenger’s seat. The term was inspired by America’s Wild West stagecoach days. That "shotgun" seat was occupied by the man holding the shotgun to protect the stagecoach driver and the contents or people being transported. It often meant U.S. Mail or in some cases payroll prior to the train being used for such transportation. If you ever see a group sprinting toward a vehicle while yelling “shotgun,” chances are they’re just trying to lay claim to this coveted spot, and not necessarily looking to protect anyone else's interests but themselves. :)

If you’re looking to politely turn down an offer for drinks with colleagues, or a last-minute dinner invite, you might tell someone you’ll “take a rain check.” This charming Americanism comes from baseball. If a game was rained out, ticket holders were given a ticket — or rain check — for a future game. Originally hand-written, they shifted to being typed and eventually computer-printed. Since this sport has often been played in the spring, when rains are abundant, games getting rained out is a common occurrence. Where I used to live in Colorado, they have always had shorter seasons due to spring rains.

America’s colonial history pops up in American slang. If you ask for someone’s John Hancock, you’re asking for their signature. John Hancock was a real man, an American revolutionary patriot who made a literal name for himself with his flamboyant signature on the Declaration of Independence in 1776. He is known for his audacious action, saying if he was going to put his name on such a treasonous document, there would be no doubt whatsoever that it was him! He was just one of many bold and determined founding fathers who forged this great nation.

Whether you’re in high school or university, American students typically progress through these levels, based on their year of study — a practice not followed outside of America. Interestingly, these terms originated at the University of Cambridge in England, only to fall out of favor until they were revived by Cambridge graduate John Harvard, when he, you guessed it, founded Harvard College. Today, these distinctions belong solely and uniquely to students attending higher learning institutions in the U.S. In other countries, studies are classified by "first year" followed by the degree path.

More Bang for Your Buck

This American expression refers to getting a good deal, but the origins are a little more nefarious. President Dwight D. Eisenhower coined the phrase in the 1950s, with the aim of expanding America’s armed forces while decreasing military spending. He believed a strong economy was just as important as a strong military presence, but he also believed the United States shouldn't get involved in some of the more petty and smaller skirmishes and wars with what he considered insignificant countries. Instead, he felt the U.S. should engage with the nuclear weapons and utilize its power to threaten rather than demonstrate its strength through the free enterprise system and individual liberties. 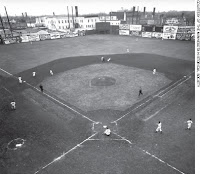 While a professional ballpark is defined by the baseball diamond, the outfield, the stands, the concessions, and the walls around it, neighborhood fields might not have the same boundaries. Even the original fields where baseball was first played had rather loose boundaries. Sometimes, it might be a copse of trees, a fence, town buildings, or even a barn or body of water. What made this sport so appealing is it could be played anywhere, including in the street, an open field, or in a yard behind a house.

So when the word "ballpark" is used off the field, it usually means you're in the right general area, but maybe not within specific and exact boundaries. You can ballpark an estimate, hit something out of the ballpark, or meet someone’s guidelines by being in the same ballpark. It's similar to horseshoes. You'd be "close enough" to win.

* What phrases above do YOU use on a regular basis?
* Do you know of a colloquial phrase with origins in American history that is still popular today?

* Share some of your favorite phrases, even if you don't know their origins.

Leave answers to these questions or any comments you might have on this post in the comment box below. For those of you who have stuck around this far, I'm going to start a new pattern of sending a FREE autographed book to one person each and every month from the comments left on this blog. You never know when your comment will be a winner!
Come back on the 9th of February to learn about .
For those interested in my "fictional" life as an author and industry news about other authors, subscribe to my quarterly newsletter. Receive a FREE omitted chapter from my book, A Grand Design, just for subscribing!

Tiffany Amber Stockton has been crafting and embellishing stories since childhood, when she was accused of having a very active imagination and cited with talking entirely too much. Today, she has honed those skills to become an award-winning, best-selling author and speaker who is also an advocate for literacy as an educational consultant with Usborne Books. She loves to share life-changing products and ideas with others to help improve their lives in a variety of ways.
She lives with her husband and fellow author, Stuart Vaughn Stockton, along with their two children and four cats in southeastern Kentucky. In the 20 years she's been a professional writer, she has sold twenty-six (26) books so far and is represented by Tamela Murray of the Steve Laube Agency. You can find her on Facebook and GoodReads.
Posted by Tiffany Amber Stockton at 1:00 AM