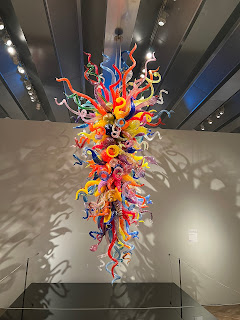 My family visited the Museum of Glass in Tacoma, Washington. The galleries featured modern works, like the Dale Chihuly piece featured above and to the right. Yet as I walked through each room and then sat in the Hot Shop to watch a demonstration, I began to wonder. When and where did the process of making glass begin?
While I could not find a definitive answer, the consensus seems to point to origins of manmade glass in Egypt and Eastern Mesopotamia around 3,500 BC. Production of glass vessels began in 1,500 BC. While naturally occurring glass in the form of obsidian/black volcanic glass was used much earlier in the production of knives, arrow heads, and other objects.
What substances form glass? Sand, soda ash, and limestone combine at high temperatures until they become molten or liquid. At ambient temperatures they form a solid. In the early years of glass making, it was difficult to reach the necessary temperatures and work with the materials until a Syrian developed the blow pipe. As a reference point, the Hot Shop at this museum keeps their furnaces at 2,100 degrees Fahrenheit to keep the clear glass pliable. Imagine the difficulty of maintaining this temperature without modern conveniences. 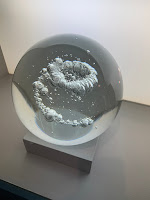 How was glass produced in the early years? The ingredients were heated in small furnaces. Initially, the craftsmen poured the molten glass over beads or other items. They created amulets and other adornments. The next uses were pouring the liquid into formed containers or molds. None of these yielded consistent results. After the blow pipe was invented, the artisans were able to devise vessels. This process was more efficient and less costly. The method spread across Europe and allowed designs in architecture as well as artful items.

Around 100 AD, clear glass was discovered. Up until that time, the color or lack of was not consistent. In the eighth century, a Persian known as Geber, discovered formulas in which oxides of metals colored glass. A few examples: Gold Chloride = Red, Cadmium Sulfide = Yellow, and Cobalt Oxide = Blue-Violet. This development paved the way for stained glass windows. By the 13th and 14th centuries cathedrals sported multicolored windows. Notice the photos I took a few years ago inside the St. Chapelle in Paris, France. The Rose window dates from the 15th century, but two-thirds of the other windows are original to the construction of the cathedral which was completed in 1,248 AD. 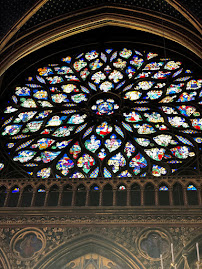 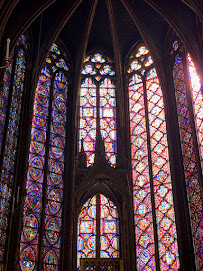 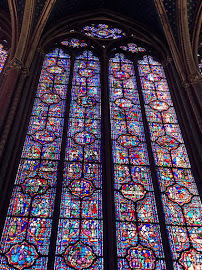 What modern processes are used in the Hot Shop at the Museum of Glass? 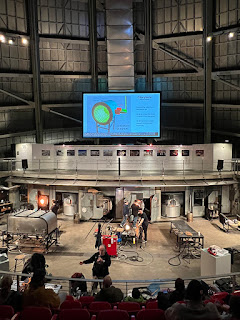 A vat of clear molten glass exists in the furnace at 2,100 degrees. The craftsman collects a small amount of the liquid on the end of the blow pipe. He/she begins to work with the substance to form it into the chosen item. The long process involves blowing, turning, shaping, cutting, heating (see the photo below with the blow torch in use), and then placing it into “The Glory Hole” to reheat. Over time, and with repetition of these steps and more, the artisan molds and shapes the creation.
When it is time to add color, they use colored glass rods the museum ordered from suppliers. They do not create colored glass at this museum. The rods are heated, and the color applied to the outside of the clear glass as needed. While we sat and watched that day, the teams worked on two items. A dragon and the other, a large bowl. If you would like to watch these talented artists in action, watch live feeds of the workshop during business hours. 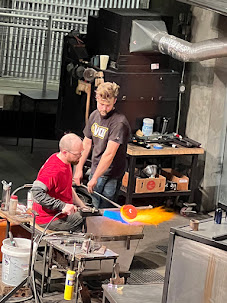 As we observe glass pieces in the future, perhaps we will ponder and wonder at the time, effort, and talent employed to create these objects. Do you have a favorite… stained glass windows, sculptures, figurines, or ornaments?
Sculptures featured:
Gibson Chandelier, 2000, Dale Chihuly
Sphere with Internal Bubble Decor, circa 1960s
Windows, 2003, Emily Brock (below) 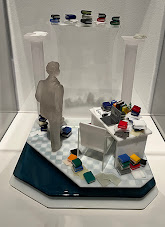 As a child, Rebecca loved to write. She nurtured this skill as an educator and later as an editor for an online magazine. Rebecca then joined the Cru Ministry - NBS2GO/Neighbor Bible Studies 2GO, at its inception. She serves as the YouVersion Content Creator, with over 75 Plans on the Bible.com app.

Rebecca lives in the mountains with her husband and a rescued dog named Ranger. Her best days are when the whole family gathers, especially with their two grown sons. As a member of ACFW, FHLCW, and Hope*Writers, Rebecca learns the craft of fiction while networking with a host of generous writers. She is working on her first fiction novel. The story unfolds from the 1830s in Northern Georgia.
Connect with Rebecca: Clubhouse Facebook Goodreads Instagram Pinterest Twitter Website

Posted by Rebecca Davie at 3:30 AM