In Our Own Backyard

This is our second winter in Southwest Colorado. Living for 44 plus years in Texas didn't prepare us for narrow mountain roads, snow/ice, no cell phone reception, limited shopping opportunities, and mud. Now, I know some of y'all are chuckling because this is no big deal to you. It was culture shock for us.

Old-timers' tips were invaluable and we put them into practice. Knowing generally what to expect was very comforting. Along with the sage and timely advice came some tall tales and fascinating facts about Colorado. We heard about the school that had been in our cow pasture, about the stagecoach station three miles east on the banks of the Piedra River, and the Ancestral Puebloans at Chimney Rock on the high mesa a little further up the road.

From our horse pasture, we can see the twin spires—Chimney Rock and Companion Rock, standing ready for the May15 - September 30 tourist season. 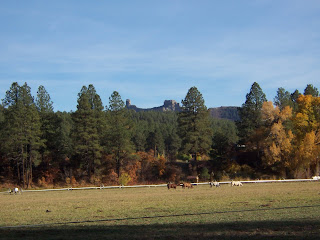 My love of history kicked into high gear and we started exploring the history in our own backyard. Chimney Rock, on the southern edge of the San Juan Mountains, has been on the National Register of Historic Places since 1970. On September 21, 2012, it was established as a national monument. Visit http://www.chimneyrockco.org/ for more information about this fascinating piece of history. 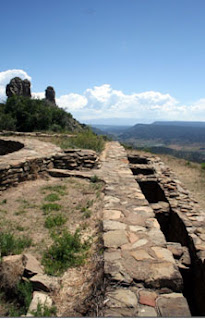 The view from the top is breathtaking and worth the hike. The Guides from the Chimney Rock Interpretive Association are extremely knowledgeable and make the adventure worthwhile. It's believed that this site was used as a communication link between 10 Puebloan sites ranging in distance from 2.7 miles to 67 miles. Modern day experiments show that it could have been accomplished. The Ancestral Puebloans probably used signal fires or polished sheets of reflecting mica.

For Perspective— The red "A" designates Chimney Rock, between Durango and Pagosa Springs.

Discovering that one of Jerry's favorite authors, Louis L'Amour, has a ranch in the immediate area was thrilling. Starting in 1966, L'Amour and his family spent summers in Durango, CO. For over ten years, they spent the month of August in Room 222 at the Strater Hotel. He divided his time between writing in the front corner room and hiking in the La Plata or San Juan Mountains.

For Jerry's birthday last year, we stayed in room 222. L'Amour wrote many of his Sackett series novels on the drop-leaf table still in this room.  In honor of the occasion, Jerry read his favorite L'Amour novel while we listened to the ragtime piano in the Diamond Belle Saloon below the room. No wonder there's a lively beat to L'Amour's stories.

Fred Harman grew up in Pagosa Springs, CO. In November 1938, he launched Red Ryder and Little Beaver comics as a Sunday strip and four months later it became a daily strip. Do you remember those comic strips? Did you read any of the Red Ryder comic books? I loved Little Beaver's feather!

Harman promoted Red Ryder as "America's famous fighting cowboy." Harman was one of the original 1965 members of the Cowboy Artist of America and one of only 75 white men in history to be adopted into the Navajo Nation. The Pagosa Springs SUN is the only newspaper in the United States that currently publishes the Red Ryder and Little Beaver comic strip. I get to read the strip every Thursday! 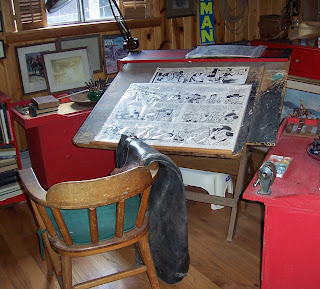 The Fred Harman Art Museum in Pagosa Springs houses a large collection of original artwork and memorabilia on the American West. Visit http://www.harmanartmuseum.com/ for more information.

Last year I submitted a novella "Christmas Gold" that incorporated the camels brought from Turkey, Egypt, and Tunis to assist the military in the desert around Fort Davis, Texas. Imagine my delight when I discovered that some of those camels, imported in 1840 and accompanied by Jacob Acabajal, had found their way to Bent County, Colorado. Like the moose that are being repopulated around Bayfield, the camels are still out there and frequently sighted. I've seen the moose. Now, I'm on the lookout for the camels.

Keep your eyes open and look around for history in your own backyard!