One of the places my family and I visited when traveling from Massachusetts to Florida was St. Augustine, FL. We went through the old fort, Castillo de San Marco, which dates back to the 1672, and visited the oldest wooden school house and Trinity Episcopal Church with their famous stained glass windows. We rode in a Landau Carriage and had the grand tour of the old city. Years later, we moved to an hour and fifteen minute drive from our home to St. Augustine. I’ve lost count on how many times I’ve visited the old city but it never ceases to amaze me.

I have two pictures of the city gates. The first is from a side angle that allows the viewer to see Castillo de San Marco in the background. The second is of the gates themselves in which the traveler would pass through to enter the city. Down this street you’ll find the oldest wooden schoolhouse in the United States. At one time they chained down the schoolhouse with a large chain and anchor to keep it from blowing away in a hurricane. What an interesting tidbit! In the photo below you will see the schoolhouse, the chain and the anchor. 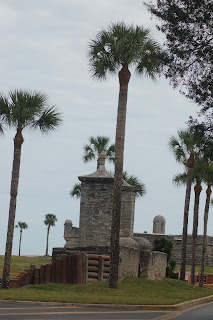 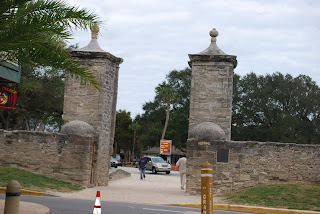 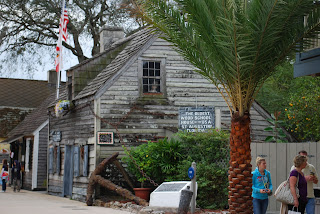 The fort, Castillo de San Marco is the oldest mason constructed fort in the U.S.A. and was made from quarried Coquina, which is a stone like substance unique to the area made from small seashells. The quarry is outside the entrance to Anastasia State Park (great place to camp, btw). The Spanish settled the area; the British came in for a while, then reverted back to the Spanish and finally to the United States.

Ponce de Leon is credited with finding St. Augustine during his search for the fountain of youth. In fact, there is a site/tourist area of the Fountain of Youth. It’s another interesting place to visit. If you drink the water be prepared for the high sulfur content.

St. Augustine during the 19th Century was a port city. The St. John’s River was a major transportation route for the Floridians to sell their cattle and crops. Believe it or not, Florida produced more cattle than Texas until a few years ago. But we’ll get into that and the Florida Crackers in another post.

Finally, I’ll stop with a picture of the Alacazar Hotel which is now city hall and the Lightner museum. It was opened on Christmas day 1888 by Henry Flagler. It’s another interesting building to stop by and enjoy the shops, the koi, the architecture and soak up the days of old. And don’t forget to visit the old swimming pool, which is now a place to sit and visit. With a bit of imagination you can picture just how large this pool was and some of the ladders are still on the walls where the residents could climb up to their floors. 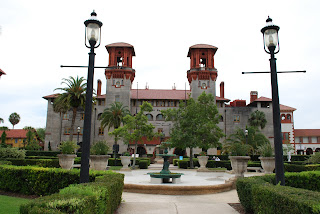 Lynn A. Coleman is an award winning & best-selling author who makes her home in Keystone Heights, Florida, with her husband of 39 years. Check out her 19th Century Historical Tidbits Blog if you like exploring different tidbits of history.