Hi.  Winnie Griggs here.  While doing some research into stage travel a while back, I came across an interesting footnote about a colorful stage driver named Charley Parkhurst or “One-eyed Charley”.  The reference intrigued me and, as often happens when I do research, I decided to follow this rabbit trail to see where it would lead me.  And it led me to a very interesting story indeed.

Charley was born in around 1812.  Orphaned while very young, Charley was sent to an orphanage, escaped from the orphanage at around age 12 and found a job working in a stable.  There it was discovered Charley had a way with the horses and was promoted to handling teams and eventually progressed to driving coaches.  Charley’s skill was such that patrons were known to specifically request the young driver by name.

In 1851 Charley moved to following the opportunities that opened up with the gold rush and soon earned a reputation as one of the safest and fastest drivers around, easily handling the ribbons for a team of six.  According to one source looking back over Charley’s career, ". . . in more than twenty years no highwayman had dared to hold up a stagecoach with Charley Parkhurst on the box, for the first two who tried it had been shot dead in their tracks."

At some point, Charley lost an eye as a result of being kicked by a horse.  Not to be deterred﻿ ﻿ by the mishap, Charley wore a black eye black patch from then on, which is the origin of the nickname “One-eyed Charley.”  And that wasn’t Charley’s only nickname - the skillful stagecoach driver was also known as Mountain Charley and Six-Horse Charley.

From all accounts, though known for being honest and fair, Charley was no saint.  The colorful driver’s habits included smoking cigars, chewing tobacco, occasional drinking, card playing, and swearing with great verve when the occasion called for it.

When rheumatism began taking a toll and the railroad expansion made increasing inroads in the passenger transport  business, Charley retired.  Never one to remain idle, the former stage-driver, now past sixty, turned to raising cattle and occasionally hauling freight for neighbors.

All of the above informtion points to a vivid life that was lived fully and with gusto.  But the most astounding thing about Charley wasn’t revealed until it came time to lay the body out for burial.  It turns out Charley was a WOMAN! 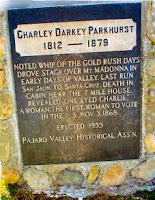 Her real name was Charlotte Darkey Parkhurst.  From all appearances, co-workers, business partners, neighbors and close friends were absolutely flummoxed at the news.  In fact, Charley had even gone so far as to register to vote in the presidential election of 1868,
long before women were allowed that privilege, which means she may have been the first woman in California to vote.

Today there is a monument on Charley's gravesite that reads "Charley Darkey Parkhurst (1812-1879) Noted whip of the gold rush days drove stage over in early days of Valley. Last run to . Death in cabin near the 7 mile house. Revealed 'one eyed Charlie' a woman. First woman to vote in the November 3, 1868."  Note: The information about being the first woman to vote in a US election has been disputed.
.
Reading this remarkable story had the writer in me imagining story after story to account for what had led Charley to lead such a curious life.  Some of my questions
Another piece of this intriguing puzzle that spurs the imagination - it was said that those who went through Charley’s possessions found baby clothes. Wow, if true does this ever raise questions.
So what about you?  Did this snippet of Charley’s history cause you to start spinning tales in your head about what her life might have been like?  What aspect most captured your imagination?
Posted by Winnie Griggs at 12:45 AM