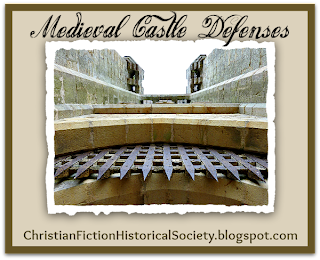 The post is brought to you by Janalyn Voigt. Escape into Creative Worlds.

Author's Note: I researched medieval siege warfare for DawnSinger, book one in my Tales of Faeraven medieval fantasy series, since its world is based on 13th-Century Europe. While I found the topic difficult to research (man's inhumanity to man has been going on a long time), castle defenses fascinate me because of the ingenious way function and design merged to create beautiful architecture.

The architecture of the castle proved a strong ally to its inhabitants, which is why a siege could drag on for months without being resolved. A castle might be laid siege to (stormed in a direct attack) or besieged (starved out).

Architects built castles to withstand extended warfare. One of the first considerations was location of the construction site. A castle built at the edge of a sea or lake could receive supplies by boat, a fact that made it challenging to besiege.

Perching a castle on the brink of a cliff would make it impenetrable from that side. This strategy could have unfortunate consequences. Dunluce Castle, situated on the edge of a basalt outcropping in County Antrim, Northern Ireland. Part of the kitchen is said to have collapsed into the sea. Legend has it that only a kitchen boy survived, and that its mistress afterwards refused to live in the castle any longer.

Motte-and-bailey and ringwork castles sat high atop what was usually a man-made hill. This gave the defenders among other benefits a good view of the surrounding countryside. 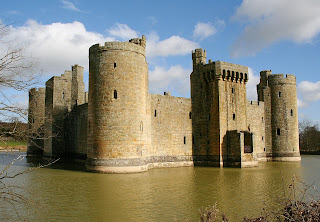 Diverting natural waterways into ditches to surround a castle improved security, however besieging armies might patiently fill in portions of a moat with rubble in order to reach the castle walls.

As a protection against sappers ready to chisel away mortar and create holes, castle walls often thickened at the base,

In medieval siege warfare, miners would tunnel beneath the corners of square towers in order to weaken and collapse them, thus breeching the wall. Defenders would watch the surface of water in bowls to warn them of mining activity. If they detected any, a counter-tunnel might be dug to collapse the enemy's tunnel. Round towers, which had no corners to collapse, were stronger. 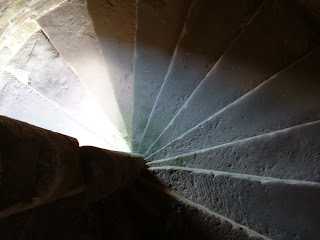 Stairways wound upward in the towers, always to the right. Since most people are right-handed, this put invaders climbing the stairs at a disadvantage. Their sword arms would be closest to the wall, whereas the defenders coming down the stairs to meet them would have their sword arms free. 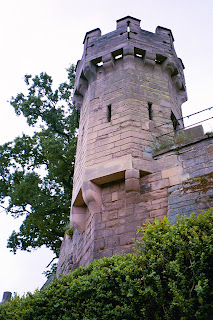 archers the ability to see out to shoot while exposing as little of themselves as possible to enemy arrows.

Crenellated (notched) parapets (a low wall or railing) built on top of walls. A defender could stand behind a merlon (the raised part) for protection, but step into the embrasure to fight.

Made of iron or iron and wood, a portcullis (shown in the first picture, above) was a sliding gate with metal teeth that could come crashing down on an enemy, or if lowered would prove difficult to compromise. Often wooden doors were shut and barred on the inside of a portcullis as well.

Two portcullises could close off a short hallway, trapping attackers in between. Through murder holes in the ceiling defenders would drop stones or pour boiling oil, hot water, or quicklime. Trap doors in the floor might burst open beneath attacker's feet. And archers could rain arrows in through arrow loops.

I can't hope to touch on all details (volumes have been written) in a single blog post, but these tidbits interested me and provide a glimpse into the practicalities of castle architecture. Click to read more notes from my research of Tales of Faeraven at Creative Worlds of Fantasy.
Posted by Janalyn Voigt, escape into creative worlds of fiction. at 1:54 AM