The Lightkeeper Wore a Skirt 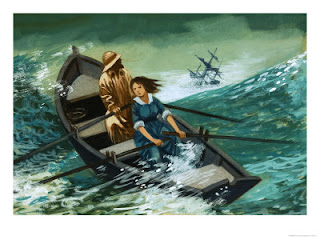 From 1789 until the mid-20th century, lighthouse keepers manned lighthouses on America’s coastline. A keeper’s duties were arduous – walking up stairs multiple times daily often carrying heavy buckets of oil, constantly cleaning and polishing the lantern, and putting new coats of paint on the towers, for example. Many risked their lives to rescue victims of shipwrecks. It was not a job for the faint-hearted, the weak, or the lazy. The job required strength, commitment and excellent work ethic. It needed a man of stamina and resolve. A man? Not necessarily.


You may be surprised to know that over 150 women served as lighthouse keepers or their assistants. Most of the time, the women became keepers when their husbands or fathers either died or became too ill to carry out their duties


In addition to lighting the lantern at sunset and keeping it going all night, most of these women had children to care for as well. There was no electricity, no plumbing, no telephones. Water had to be collected from a cistern or pumped from a well, food had to be grown and cooked, animals cared for, clothes made, washed and mended

﻿
﻿﻿﻿
﻿ Often the lighthouse board was reluctant to give women the position, considering them the weaker sex. Sometimes it took a letter-writing campaign by the woman and people who vouched for her to coerce the board to give in and offer her the job. Such was the case at the Robbins Reef Light.

When Keeper John Walker died, his wife Kate was his assistant. But the board thought the tiny, 4’10,” 100-lb. woman was incapable of handling the position. It was only offered to her after two men turned it down. In addition to all her light keeping duties, Kate rowed her two children back and forth from school on the mainland. She served as keeper for 24 years and is credited with saving over fifty lives. See her story at  http://www.lighthousedigest.com/Digest/StoryPage.cfm?StoryKey=3490.

Margaret Norvell also had two small children when her husband, a lighthouse keeper, drowned. A woman from a prestigious family in New Orleans, she could have gone back to her parents where she’d enjoy a life of ease. Margaret chose instead to carry on her husband’s work and served as keeper at three different light stations in Louisiana. During that time, she saved hundreds of people – many whose homes were wiped out by a hurricane. She also performed a daring rescue of a downed airplane pilot by rowing two hours each way in a storm to save him.

There are many other stories of the brave women who served, all of them heroines who endured hardship for the safety of others. Why did they do it? Why did they stay in lonely, dangerous places, doing jobs that were not considered normal for women?

For some, it was the income. Even though they were seldom paid the same salary as a man, the money was still better than average for a woman. Many others wanted to carry on the work to honor their husband’s commitment. Maybe the motivation came from a natural, nurturing instinct to protect and care for people.


As Margaret Norvell put it, “There’s nothing unusual about a woman putting a light in her window to guide her menfolk home. I just happen to have a bigger light and a lot more menfolk to look after.”


My husband and I just returned from serving as volunteer caretakers at the Little River Light in Cutler, Maine. The experience was amazing, awesome, and invigorating. However, we had the modern conveniences of indoor plumbing and electricity, which were added to the 1888 keeper's house in the mid-20th century. We also didn't have to operate the light, since it is now electric and automatic. We had a power boat to transport us from "our" island to the mainland and didn't have to row across the water. Plus, we were able to go to a grocery store for supplies before we began our stay, and didn't have to grow our own food. So, despite the temporary isolation and lack of a few amenities we have in our own home, we didn't endure hardship. And I wasn't alone.
The life of a lighthouse keeper was not easy, and I now have an even greater appreciation for what these people, especially women, endured so that others would be safe. Do you think you could have been a lighthouse keeper?


To read more about lighthouses, go to http://pathwayheart.com.
Posted by Marilyn Turk at 1:00 AM