Hi, this is Darlene Franklin, celebrating the release of my figure skating story, Golden Dreams. My heroine hopes to compete in the 1932 winter games, held in Lake Placid, New York.

Held during the height of the Great Depression, the games needed a special leader to make sure they went smoothly. Enter Dr. Godfrey Dewey of the Lake Placid Club. In addition to bringing the games to his small town, he also donated land for the bobsled run.

Prominent athlete William Fiske drove the gold-medal winning bobsled team. The best story goes to
Eddie Eagan. He won his second gold medal in bobsled. His first? He won the boxing event in 1920, and he is only man to medal at both the Summer and Winter games.

CBC and NBC broadcast the games by radio and shortwaves brought them to Europe. With the games so available, public interest grew.

Figure skater Sonja Henie won the second of her three consecutive gold medals at Lake Placid. All the skating greats who have followed owe her for the popularity of the sport. 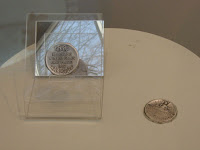 Seventeen nations participated in the 1932 games. The United States won the medal tally, with a total of twelve. Norway came second, with ten. Contemporary powerhouses like Japan, Korea and Russia didn’t participate at all.

If you’re interested in figure skating and the 1932 Olympics, leave a comment below for a chance Golden Dreams.

to win a copy of my book

Posted by Darlene Franklin at 1:00 AM