All my life, I’ve heard of Hillsdale College in a Michigan town of the same name, but until Patty Smith Hall (The Doctor’s Bride, Love Inspired Heartsong Presents, November 5, 2013) suggested a few of us write a series set in 1856 around a double train wreck in Hillsdale, I didn’t know Hillsdale College was the second college in the U.S. to admit female students to study alongside the men.

In 1844, Michigan Central College began in Spring Arbor, Michigan. Nine years later, it had metamorphosed into Hillsdale College centered in that small town

From its inception, Hillsdale College allowed women to receive four-year degrees, the second school to do so. It is the first college to state in its charter that it prohibits discrimination based on race, religion, or sex. It upheld this belief by acting in the thick of the abolition of slavery.

Allowing women to study alongside men doesn’t mean the college didn’t believe that females should be looked after. Many rules of conduct governed the behavior of the students. For example, men and women were not allowed to partake of tobacco, wine, or other strong drink, nor were they allowed to frequent places that served these items. Men and women were not allowed to be alone together and then only during the hours of 3:00 to 7:00 except in May and June, when they could be together until 8:00 P.M.

Numerous other regulations governed academic behavior such as absenteeism, taking tests, and receiving extra instruction. Students were encouraged to join literary societies, and when those met were also directed.

Behavior both academic and social were overseen by the president of the college or a female faculty member called the Lady Principal.

Although Hillsdale was started by the Free Baptist Church, it was always nondenominational. Written in a Bible buried in the cornerstone of the original building is this prayer: “May earth be better and heaven be richer because of the life and labor of Hillsdale College.” 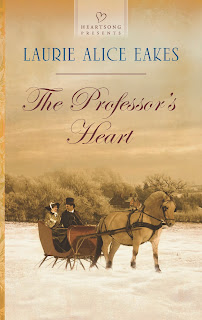 The Professor’s Heart (Love Inspired Heartsong Presents) by Laurie Alice Eakes features a professor at the college and a female graduate whose ambition destroyed their relationship in the past. Now, a train wreck on a snowy night gives them a second chance to choose between love and career and discover what the Lord wants for their lives. This is Eakes’s sixteenth book and releases on December 3, 2013.
Posted by Laurie Alice Eakes at 3:00 AM