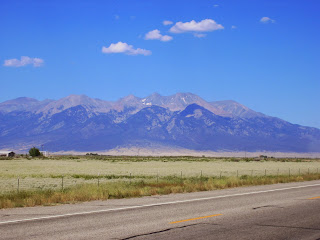 First and most obvious is the spectacular beauty of the landscape. Presided over by queenly Mount Blanca, which reaches a majestic 14,345 feet high, the Valley has an area of 8000 square miles. According to Wikipedia, “Blanca Peak is the fourth highest peak in Colorado, and the eighth highest peak in the contiguous United States.” Travelers across this wide, flat valley never have to feel lost in the SLV as long as Blanca is in sight. 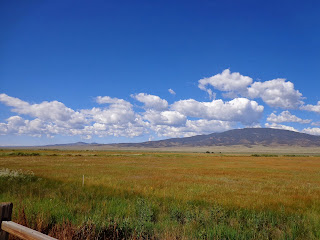 Isn't this a gorgeous scene? This distant mountain is part of the San Juan range on the west side of the Valley. Have you ever seen a bluer sky? 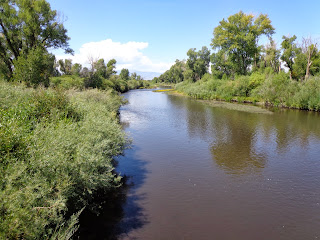 Another important landmark is the famous Rio Grande Del Norte, or as most of us know it, the Rio Grande, whose headwaters flow from the San Juan Mountains on the western side of the Valley. From there, the water takes an eastern, then southern path, winding down to New Mexico and finally Texas, where it forms a natural border between the United States and Mexico.

Another reason I love the San Luis Valley is its rich history. Before the coming of Europeans in the 1600s, Native Americans used this area for hunting but didn’t make permanent settlements due to the extremely cold winter weather. When my family moved to the SLV in 1960, we could still find arrow heads left by those long-ago hunters. 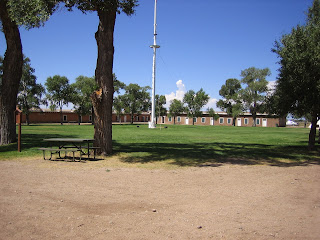 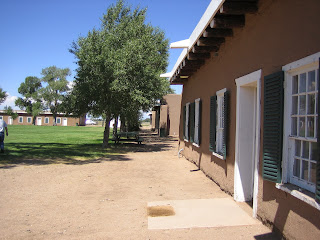 After the arrival of Spanish settlers, Ute tribes settled in the southwest corner of the Valley. For a time, Mexico owned what later became Colorado Territory, but the land became the property of the United States with the 1848 Treaty of Guadalupe Hidalgo. People of Spanish and Mexican descent were forced from the land granted to them by the Spanish crown, and Americans began to move to the Valley….slowly. Then, after the Civil War, easterners moved to this area, lured by promises of rich farmland and mineral wealth in the form of gold and silver. Any time you have the conflicts inherent in these situations, the history is ripe for plucking as settings for exciting western adventures. These two pictures show the interior of Fort Garland, where the United States Cavalry kept law and order in the area. 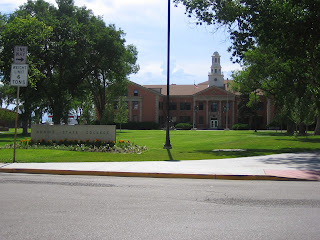 My third reason for wanting to set my stories in the San Luis Valley is my own personal connection to the place. As mentioned before, my family moved to Alamosa, the Valley’s largest town, in 1960, where I graduated from high school and attended Adams State College (shown at right). Later my husband and I settled there and had our four children. During all of that time, I loved the history that permeated every square foot of the area. Old buildings, leftover sections of railroad tracks, early architecture, legends and lore, the bluest sky you’ll ever see any place in the United States, even the below-zero degree winter weather all call out to me to tell their stories.


So as I leave Regency England behind and begin this new adventure of writing westerns, I’ll invoke memories of the John Wayne movies I grew up watching with my father. I hope my readers will be as happy to make the journey with me as I am to embark on it.


This will be my last post for a while. In previous posts, I have enjoyed telling you a little bit about the various ethnic groups that make up my ancestry, and I hope you’ve enjoyed reading about the Irish, Scottish, Welsh, English, Norwegian, and Dutch people who left their mark on my DNA.

Except for the book cover, every picture on this page was taken by my husband, my friend Pam Williams, or me. We own the copyrights and can prove it. I hope you enjoyed this visit to a beautiful part of the United States of America. 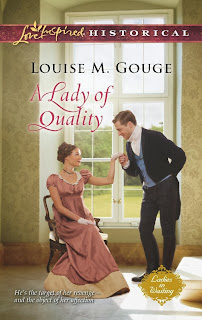 I would like to give away a copy of my final Regency novel, A Lady of Quality, to someone who leaves a comments about your favorite location for novels. This giveaway is for U. S. and Canadian residents only, and it is the responsibility of the winner to know the laws and rules regarding free giveaways where you live.


Louise M. Gouge writes 19th romances for Harlequin’s Love Inspired Historical line. Her most recent release (July 2013) is A Lady of Quality, a Regency romance. She has now turned her attention to writing western romances set in her old, cold, and much-beloved home state of Colorado. Louise also has the following books available for Kindle and Nook: Escape from Kikwit! Ahab's Bride, Hannah Rose, Son of Perdition, Then Came Faith, Then Came Hope