By now, tomorrow’s Thanksgiving meals and festivities are planned and, hopefully, under control. Tomorrow is also the first day of Chanukah/Hanukkah. What are you thankful for that you will be sharing with loved ones tomorrow?

On November first, a friend asked me to list something each day that I'm thankful for. However, there was one caveat, I couldn’t simply be thankful for my husband, our daughter, family, or this group of talented writers. It had to be specific and beyond how I’ve been thankful for them in the past.

For example: On the first day, I was thankful that I’m finally getting a handle on cooking for two after years of cooking for a larger family. Leftovers are fine, but not four days in a row. Naturally, I’m thankful for Jerry, my husband of 47 years who puts up with my love of trying historical recipes. He says more and more of them are "keepers."

On the 19th, I was thankful that 44 years ago, God had already set into motion the answer to our prayers for a husband for our new-born daughter. He brought John, born in October '69, and Amanda, born in November '69, together 40 years later – a first marriage for both – in a way that can only be called a God-incidence. Truly an example that God’s timing isn’t ours.

Early in our CFHS adventure, I wrote that I’m an ardent fan of the Harvey Girls and the empire that Fred Harvey built, including the Southwest Indian Detour Couriers. On the 20th, I was thankful for my mother preserving my grandmother’s box of “receipts” and passing these recipes on to me and my sister. Many of them are refined from my great grandmother’s recipes. Many of them still used weekly.

For fun, I consulted my print copy of The Harvey House Cookbook by George H. Foster & Peter C. Weiglin (1992, Taylor Trade Publishing) to see what would have been served at a Harvey House on Thanksgiving Day. 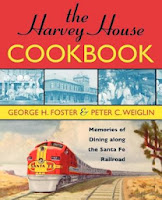 Sara Bonisteel, Epicurious, 6/18/2013, writes “Fried and his team have posted hundreds of recipes that haven't been followed in more than 80 years as a sort of living Americana cookbook, in the hopes that chefs and the culinarily curious will test the recipes.” http://www.epicurious.com/articlesguides/blogs/editor/2013/06/fred-harvey-railroad-restaurant-recipes-harvey-girls-cookbook-project.html
If you are interested in online recipes from The Harvey Girls Cookbook Project coordinated and compiled by Stephen Fried go to http://fredharveycookbook.tumblr.com/ or to the archives http://fredharveycookbook.tumblr.com/archive. This project posts original Fred Harvey recipes daily, and test-drives them weekly in their Test Kitchen. 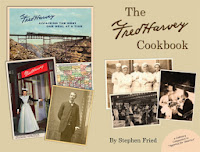 Dinner isn’t the only meal of the day so I decided that we’ll start tomorrow’s festivities with the Harvey Girl Special Little Thin Orange Pancakes served with maple syrup and bacon crisps. 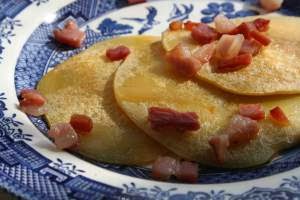 
I love reading old recipes. Deciphering some of them can be challenging as well as interesting. How often do you serve Alligator Pears? Do you have a caster on your table?


Before supermarkets sold different varieties of sugar, cooks used a "caster" or "castor" to separate very fine grains of sugar, creating what we call "superfine" sugar. Since smaller grains dissolve more quickly, superfine sugar is used for delicate foods such as meringues.

Probably no one uses casters anymore because superfine sugar can be bought or even "confectioner's" sugar, which is even finer. However, to create a little superfine sugar out of normal table sugar by grinding it in a food processor, a caster could be used to help filer the sugar being ground.


Interest in the Harvey Girls isn’t waning. In the 1880's, over 100,000 young women worked as waitresses along the transcontinental railroad opening the doors of both the West and the workplace to women. 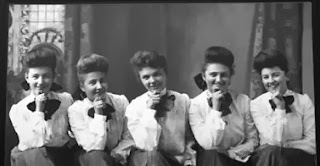 A new documentary, 'The Harvey Girls: Opportunity Bound' will air on PBS channel KCPT, tomorrow night, November 28 at 7pm. Katrina Parks <katrinaparks@mac.com>, Director/Producer, has put up information about the documentary on Facebook at https://www.facebook.com/HarveyGirlsDocumentary, where an up-to-date list of events and all the press is available. DVDs of the documentary are for sale. The film made its debut this summer at the National Archives in Kansas City, in conjunction with their exhibit on Fred Harvey, The Man, The Brand, and the American West. The exhibit will be up through January 4, 2014.

The film explores the life of Fred Harvey and his company which left its mark by not only providing work opportunities for women, but by being among the first companies to promote cultural diversity in the workplace by hiring Hispanic and Native American women to be waitresses along with their Anglo peers. The Harvey Girls, whose workforce continued to flourish until the 1960s, were true pioneers and set a new standard of excellence for women in the workplace, paving the way for generations of independent young women to come.

For a sneak peek of the documentary go to http://www.harveygirlsdocumentary.com.

Don’t forget Cynthia Hickey’s book featuring the Harvey Girls Cooking Up Love (Heartsong Presents, July 2013) for a bit of sweet indulgence after the day is done. Reward yourself. Cynthia is the CFHS Blogger on the 3rd of each month.

Oh, by the way, an Alligator Pear is an Avocado.

My give-away this month is a $20 Amazon gift certificate. Leave a comment for a chance to win.

Have a happy and blessed Thanksgiving Day,

This year, Lin and Jerry celebrate their third Thanksgiving in Chimney Rock, Colorado. When she isn't researching the many fascinating things in and around their ranch, she is working on her new series Voices in the Desert. The first book, Treasures Among the Ruins, is set in 1926 and introduces Cornelia Miller and her adventures as a Southwestern Indian Detour Courier. The other four books span the years 1928-1932.
Posted by Linda Farmer Harris at 12:05 AM