So many times in a writing career, we are given the advice to "write what you know." In my present stage in life, that often means topics such as temper tantrums, potty-training, hectic schedules, behavior adjustments, spilled drinks, play-dough, messes in the playroom, and bath schedules. But rather than delve into the life I live every day, I choose to get lost in the annals of history.

Recently, I assembled a proposal for an editor on a 3-book series set in Colonial America, and more specifically New Castle, Delaware. Far too often, that little state gets overlooked in the significance of the founding of the United States. Since I spent over 30 years of my life living there, I feel I owe it to the tiny state to showcase its many facets and contributions to American history. More than that, though, this little town helped grow my love for history and instilled in me a great appreciation for those who lived life before us here in America, and those who forged the way toward some of the life we enjoy today.

Since Delaware isn't often used in historical fiction, I love the opportunity to showcase its beauty and significance through the stories I write. Today, I thought I'd delve a bit into historic New Castle and share with you why this town stirs my heart in so many ways.

New Castle, Delaware was established in 1651, at a time before Delaware was even a colony. Instead, it was once known as The Three Lower Counties (of Pennsylvania). Just before the Revolutionary War, the 3 counties separated from Pennsylvania to form their own colony. Not long after, representatives from Delaware were the first to vote in favor of the Declaration of Independence, and the first to ratify the U.S. Constitution, giving Delaware the name, The First State.

The great thing about New Castle is it's all real, not a colonial restoration geared for tourists. That honor belongs to Colonial Williamsburg, a site chosen *after* the residents and business owners in New Castle rejected the proposal for their town to become a tourist destination. When I first learned that fact, it made me respect New Castle and its inhabitants even more. They could have been a significant draw with worldwide tourist appeal. Instead, they chose to keep things simple and maintain their way of life. That speaks volumes, in my mind. 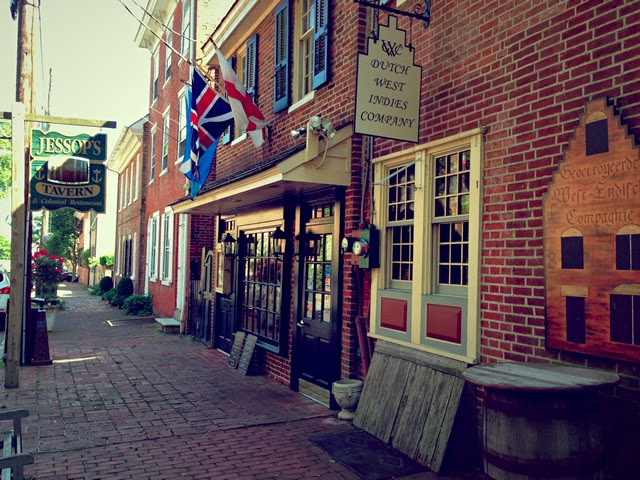 Historic New Castle is where you'll find great examples of colonial, Dutch and Federal architecture that are actually lived in by 21st century people, going about there daily lives as people have been doing in New Castle for quite a long while. They don't dress in colonial costumes and act at life, at least for 364 days of the year. Old New Castle Day, held on the third Saturday in May, is an exception. On that day, the town comes alive and gives you a glimpse of what life was like during the Colonial period, right down to the speech, the clothing, and the streets reserved solely for horses and buggies. It's quite a sight to see, and it's an experience you'll never forget.

New Castle is where William Penn landed in the New World. A marker on the corner of The Strand and Delaware Street tells us he landed on October 27, 1682. The ceremony in 1682 involved Penn taking a key, he was given "1 turf with a twig upon it, a porringer with river water and soil, in part of all".

While there may be nothing in Old New Castle that will raise your blood pressure, if you're looking for a relaxing stroll around a colonial town with a laid back attitude it's well worth the effort. The opportunities are endless. The experience priceless. 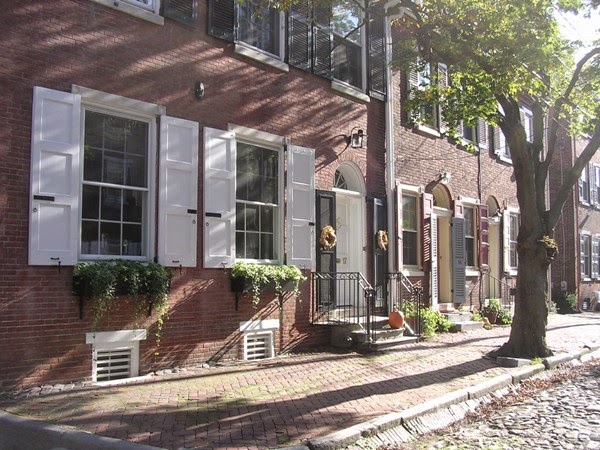 The road into Old New Castle is Delaware Street, a tree-lined affair with bricked sidewalks that are, in places, being torn apart by tree roots so watch your step. The street is lined with homes, bed and breakfasts, shops, a tavern or two and townhouses that date back to the to 1700's and earlier.

Delaware street opens into the Green where you'll find the Old Court House, built in 1732. The Court House was the place where the state's colonial assembly met from 1732 until 1777 when New Castle was Delaware's capital. There was a pivotal--and humorous--scene in my first series set here. 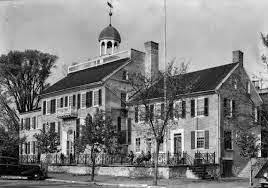 The Green, and the town itself, was laid out in 1651 by Peter Stuyvesant, the Dutch Governor. It was the place where whatever was happening at the time happened, and where the old jail and gallows were located. It was also where "grand fairs" were held and the site of the weekly markets. Today, it's a great place to park your car and explore the town on foot. On 2nd Street, a quaint, dappled cobblestone thoroughfare, behind the Court House, is one of the oldest Presbyterian churches in the country. My characters in my first series (Liberty's Promise, 3 books) attended this church.

On the other side of the Green, on 3rd Street you'll find the Dutch House, a late 17th century home furnished in the style of New Castle's early Dutch settlers.

The Amstel House on 4th Street is a colonial brick mansion, built in the early American Georgian style of architecture by Dr. John Finney. The house is furnished to reflect 18th and 19th century life in New Castle. The woodworking and architectural detailing is original. These two buildings can be seen in the background of some of the photos from my engagement photo shoot. Since I had already sold my first series set in New Castle when I became engaged, I thought it fitting to have my photo shoot take place in that town. Talk about fun!

The Old Library on 3rd Street, is built in the shape of a hexagon and in the Victorian style. Inside is an exhibit on New Castle's history.

The George Read II House and Garden at 42 The Strand, is "the grandest mansion and oldest garden in New Castle." The house was completed in 1804 by the son of George Read, a signer of the Declaration of Independence. Owned by the Historical Society of Delaware it is run as a living museum. It is a showcase of the decorative arts of the Federal period. You'll see an iron balcony, marble window sills, trompe-l'oeil decoration, elaborate woodwork and plaster detailing. I can't tell you how often I visited this home during my school years, as a tour of New Castle was an annual field trip for history class.

Beyond all the notable buildings, though, there are small antique and collectible shops, an art gallery and book and jewelry stores all about the town to browse through. If you want to spend a lazy afternoon watching the world go by, there's Battery Park with swings and slides for the children. You can get water ices and drinks from vendors near the river on weekends during the summer. From the park, the view of the Delaware River is panoramic. To your left, you can see the Delaware Memorial Bridge in the distance. And in the other direction, you'll find Fort Delaware on Pea Patch Island, a prisoner fort during both the Civil War. Oh the fun I had there with the dungeons!

There is also an old ticket office for the Frenchtown Railroad, one of the first in America, near the park. It was moved there in the 1950s. The railroad was built in 1832 using granite sleeper blocks supporting wooden rails covered with iron straps. It was part of a water-rail-water route from Philadelphia to Baltimore and connected New Castle to the Elk River. Some of the granite sleeper blocks can be seen along the water's edge near the Wharf and a section of the strap rail can be seen near the old ticket office.

All in all, if you're looking for a town that is almost untouched by modern influence and reflects the spirit of the past, New Castle is it. I look forward to digging deeper and exploring so many more facets in my upcoming 3-book series for a new publisher. Details to come as soon as the contract is finalized.

* Answer either of those 2 questions or leave a comment about anything in the post or my newest book, and you'll be entered for a chance to win 1 of THREE giveaways of Hometown Melodies, A Grand Design, or Brandywine Brides, my three most current books. Brandywine Brides will be out in February.

** Christmas Bonus: My newest book, Hometown Melodies, (part of a 4-book series titled Smoky Mountain Christmas and written with 3 other authors) is available now on Kindle and in print at Amazon.com. If you love Christmas romances, this series is right up your alley! Pick up your copy of each story today.

BIO
Tiffany Amber Stockton has been crafting and embellishing stories since childhood, when she was accused of having a very active imagination and cited with talking entirely too much. Today, she has honed those childhood skills to become an award-winning author and speaker who has partnered with Nerium International in the anti-aging skin care industry, helping others look younger and live better. She lives with her husband and fellow author, Stuart Vaughn Stockton, in Colorado. They have one girl and one boy, an Flat-coated retriever named Roxie and and Australian cattle dog named Timber. She has sold seventeen (17) books so far and is represented by agent Sandra Bishop of the TransAtlantic Agency. You can also find her on Facebook, Twitter, and Pinterest.
Posted by Tiffany Amber Stockton at 1:00 AM