I grew up, graduated high school, and married in the Land of Enchantment-New Mexico. Even after forty-eight years of being gone, I'm still stirred by the state song, learning history we didn't have time for in school, and seeing roadrunners and horned toads.

Part of my fascination extends to the remarkable New Mexico women. Long before strong women emerged as norm in our culture, they were carving out their places as artist, potters, writers, miners, inventors, singers, cowgirls, architects, and Harvey Girls. See Cynthia Hickey's HH&H blogs for more information about the Harvey Girls. Plus, my HH&H entry on March 27, 2013 - Hospitality Southwest Style.

My mother was a New Mexico Artisan. She wasn't famous outside her little corner of southeast New Mexico, but she had a skill and talent that she honed into incredible pottery and ceramics. She had the gift of seeing liquid colors that looked clear and colorless to me and accurately knowing how much and where to put them on the pottery. She left us with an appreciation for Southwest art and music.

Do you know your state song? Who wrote it? Below is the first verse and chorus of mine. You can find the whole song at 50States.com.

Under a sky of azure, where balmy breezes blow;
Kissed by the golden sunshine, is Nuevo Mejico.
Home of the Montezuma, with fiery hearts aglow,
State of the deeds historic, is Nuevo Mejico.

Elizabeth Garrett, daughter of Sheriff Pat Garrett, penned and published O, Fair New Mexico in 1915 and, after performing the song for the New Mexico Legislature, it was voted as the official state song in 1917 (New Mexico Statutes, Chapter 12, Article 3, Section 5). Yes, her dad was the former Lincoln County Sheriff who shot Billy the Kid. 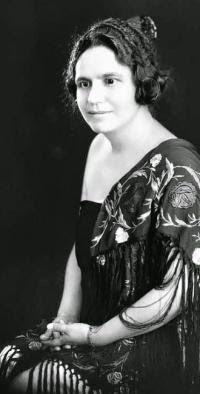 Elizabeth lost her eyesight due to an over-application of blue vitrol to her eyes a few hours after she was born. She graduated from Texas School for the Blind in Austin, Texas. In addition to becoming a nationally recognized soprano, she became a qualified voice and piano teacher. It's reported that eastern "audiences were appreciative of her talents and her interesting compositions about the far-west land of New Mexico." She was known as the Songbird of the Southwest. Elizabeth was a remarkable woman. There's so much more to her rich and incredible history.

I was born in Arkansas and lived there until the fourth grade. Not enough time to learn the state song in Arkansas history class. So, I looked up the 1916 song written and published by Mrs. Eva Ware Barnett and Will M. Ramsey. It was adopted by the Arkansas Senate Concurrent Resolution No, 6, in January 1917. 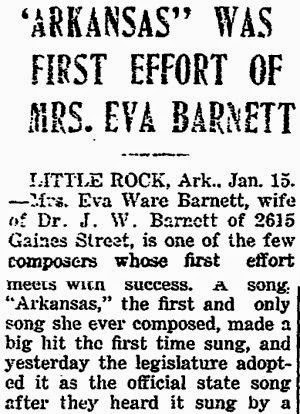 Courtesy of The Jonesboro Weekly, January, 1917

Below is the first verse and chorus. You can find the whole song at Wikipedia.

I am thinking tonight of the Southland,
Of the home of my childhood days,
Where I roamed through the woods and the meadows
By the mill and the brook that plays;
Where the roses are in bloom
And the sweet magnolia too,
Where the jasmine is white
And the fields are violet blue,
There a welcome awaits all her children
Who have wandered afar from home.

I'm confident you've heard Texas, Our Texas during football TV half-times, so I won't jot part of it down here.

Below is the first verse. Read more at 50states.com.

Where the snowy peaks gleam in the moonlight,
above the dark forests of pine,
And the wild foaming waters dash onward,
toward lands where the tropic stars shine;
Where the scream of the bold mountain eagle,
responds to the notes of the dove
Is the purple robed West, the land that is best,
the pioneer land that we love.

You can see how the state's nature and characteristics are mirrored in the songs.

Does your state have multiple state songs, anthems or historical songs?

Before you go, I can't resist another question. Does your state have an official cookie?

New Mexico has the Biscochito or Bizcochitos. Adopted in 1989, it was chosen to help maintain traditional home-baked cookery. 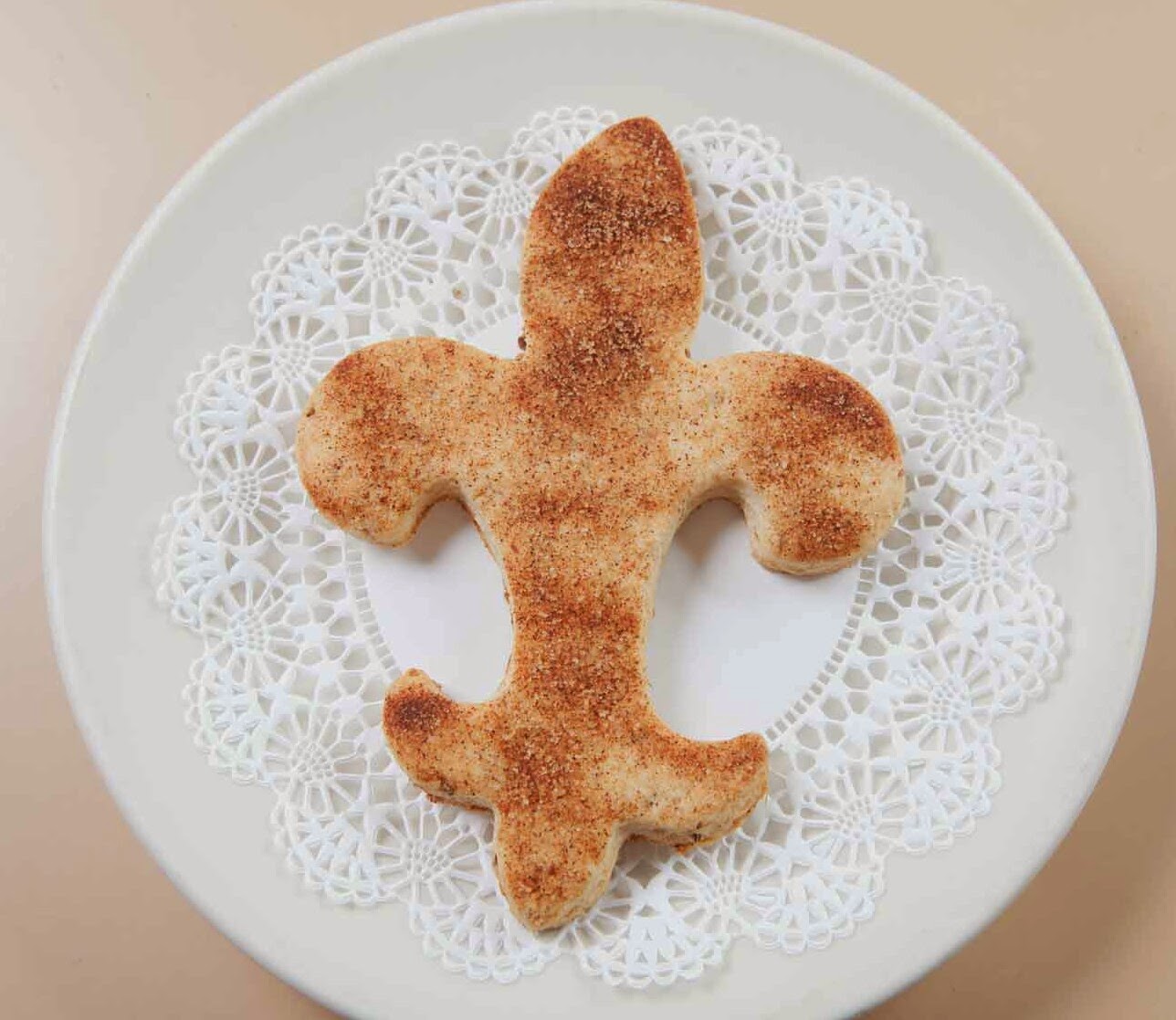 I can see a holiday batch coming up - complete with the Fleur de Lis cookie design that was the original preference. If you try the Biscochito let me know.

Lin is learning to bake at high altitudes. A chef in Grand Junction shared that using flour with 4 grams of Protein is the key to reliable Colorado baking. It works. Most popular brand flours have 3 grams of protein. She's been able to bake her father's family famous dinner rolls and popovers.
Posted by Linda Farmer Harris at 12:00 AM