As part of a genealogy trip, my husband and I visited this little town in Louisiana to research my great-great grandparents. This quaint town is set on a loessal ridge created by the dust storms of the Glacier Period. These ridges that form vertical cliffs sometimes ninety feet high extend from Baton Rouge into Tennessee, and the ridges are actually the foothills of the Appalachians.

Thirty-five or so miles north of Baton Rouge, it is the oldest town in the Florida Parishes, and it has been called the town two miles long and two yards wide. Early Spanish Cauchins in need of a highland burial ground received a land grant from their king and built a wooden monastery sometime between 1773 and 1785. The settlement which straggled up around the cemetery and monastery took its name from the order's gentle patron. St. Francis.

Below the bluffs of St. Francisville a different sort of town grew. Bayou Sara took its name and impetus from the creek which provided flatboaters a safe anchorage. With the steamboat, Bayou Sara became one of the largest cotton ports on the river. Its rowdy richness fell with civil war, fire, flood, and the boll weevil taking their toll. Hardly a trace remains today. This is the town where my great-great grandfather owned a shipping company. It now lies at the bottom of the Mississippi River after a flood destroyed the town in the early 20th century.

Here is a map of the area along the Mississippi River where the shipping company flourished prior to 1861. We believe it occupied the building with the 269 number on it and included a warehouse where he stored cotton until it was shipped up the river, but no one could tell us for certain. 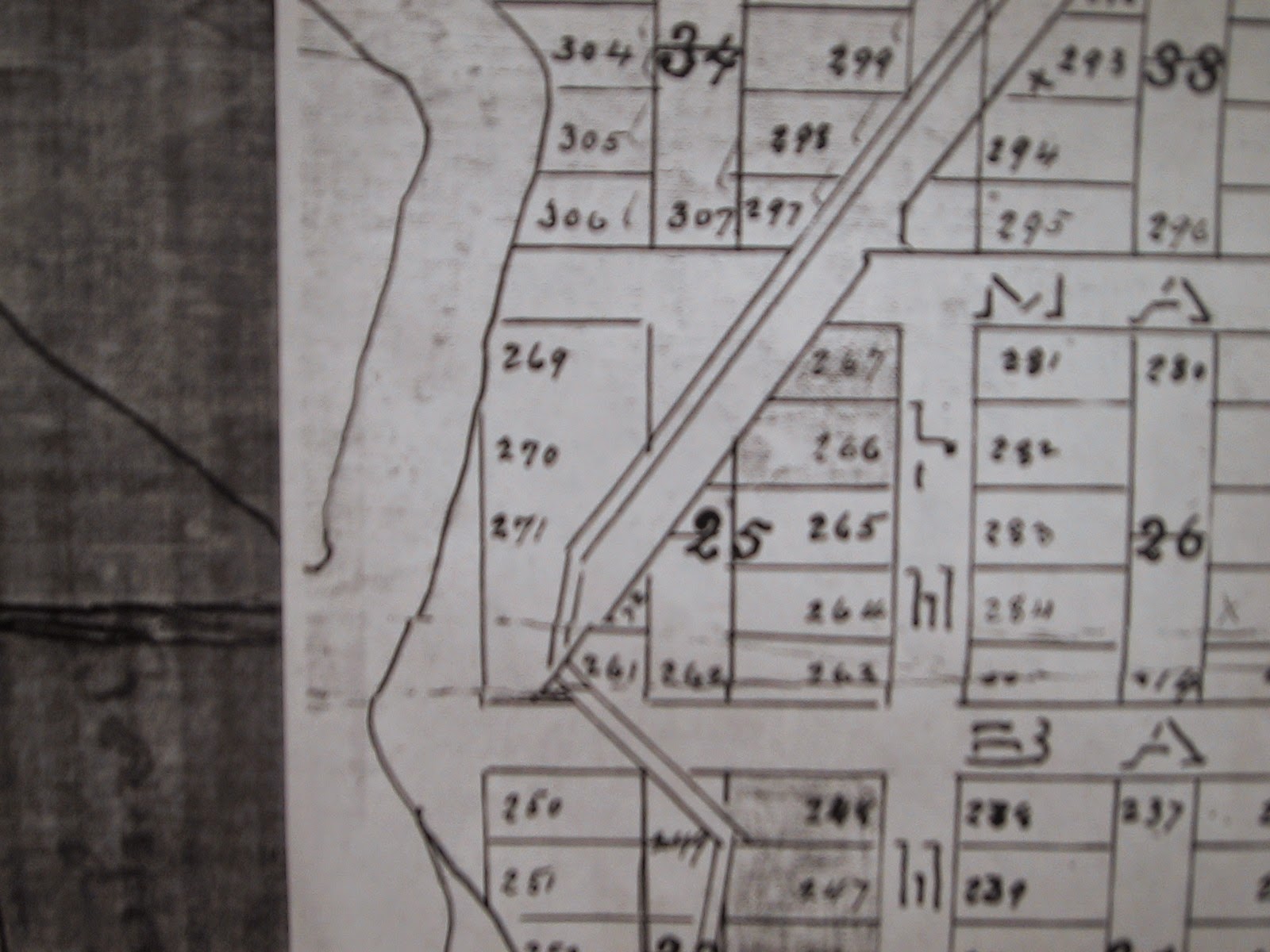 St. Francisville has survived the forces that destroyed the little town just below them. It reflects the growth and character of the surrounding countryside. A stroll through its historic center awakens a sense of place and an awareness of history with two centuries of architecture and life styles. As of the census of 2000, there were 1,712 people, 693 households, and 456 families residing in the town. 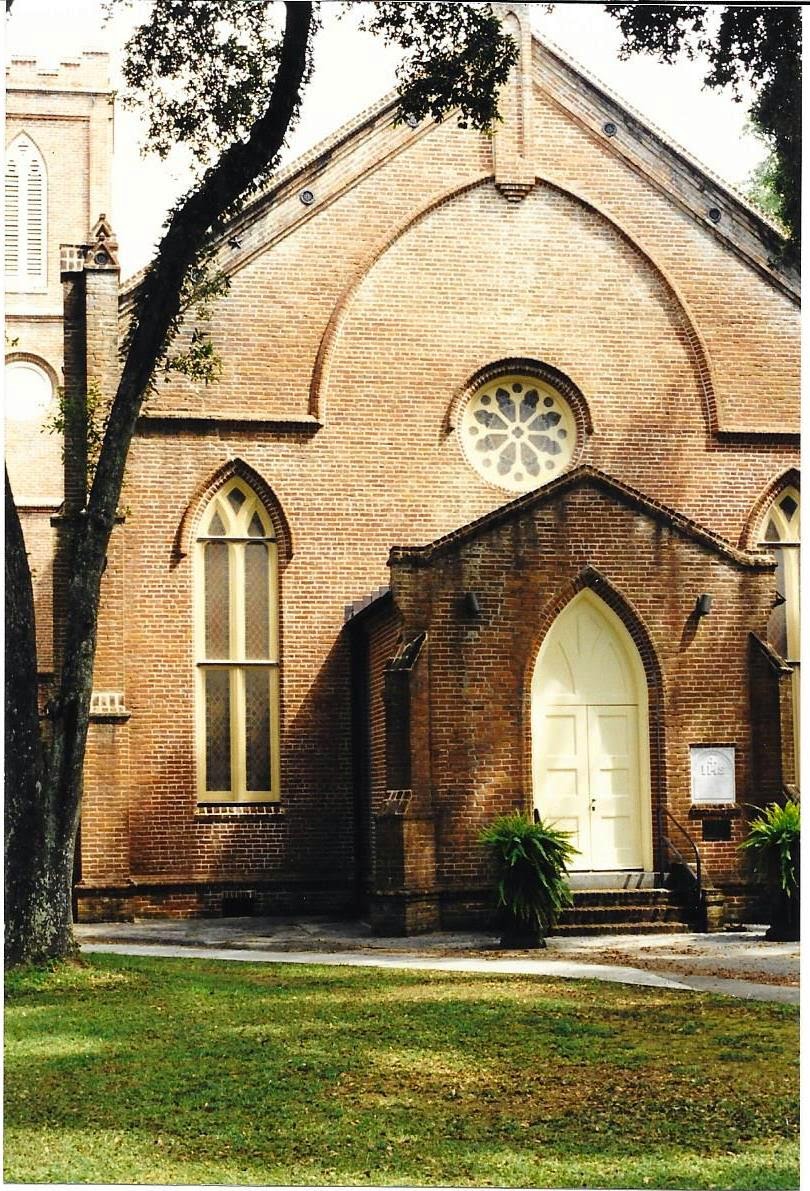 Grace Episcopal Church, established in March, 1827, is one of the oldest
Protestant churches in Louisiana. The other one in the area is the Methodist Church with a bell tower dating from 1803. 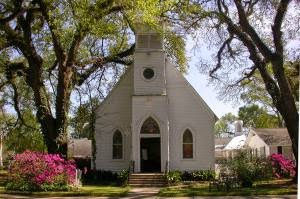 During the Civil War, Union Navy ships bombarded the coast and cannon shots up the hill damaged Grace Church. Despite the bombardment and damage, it was the site of the Masonic burial ceremony of Union Navy officer, John E. Hart, who had died aboard his ship while taking part in the Union blockade of the Mississippi River.  In June 1863, the war stood still as Confederate Officer W.W. Leake, the Senior Warden for the oldest Masonic Lodge in the state, arranged for the burial plot and rites at Grace Church. Every June a three-day commemoration called "The Day the War Stopped" is held. (For more information about this event, see my post of May 11, 2013.)

Beautiful old plantations are open to visitors for tours, and they give a true 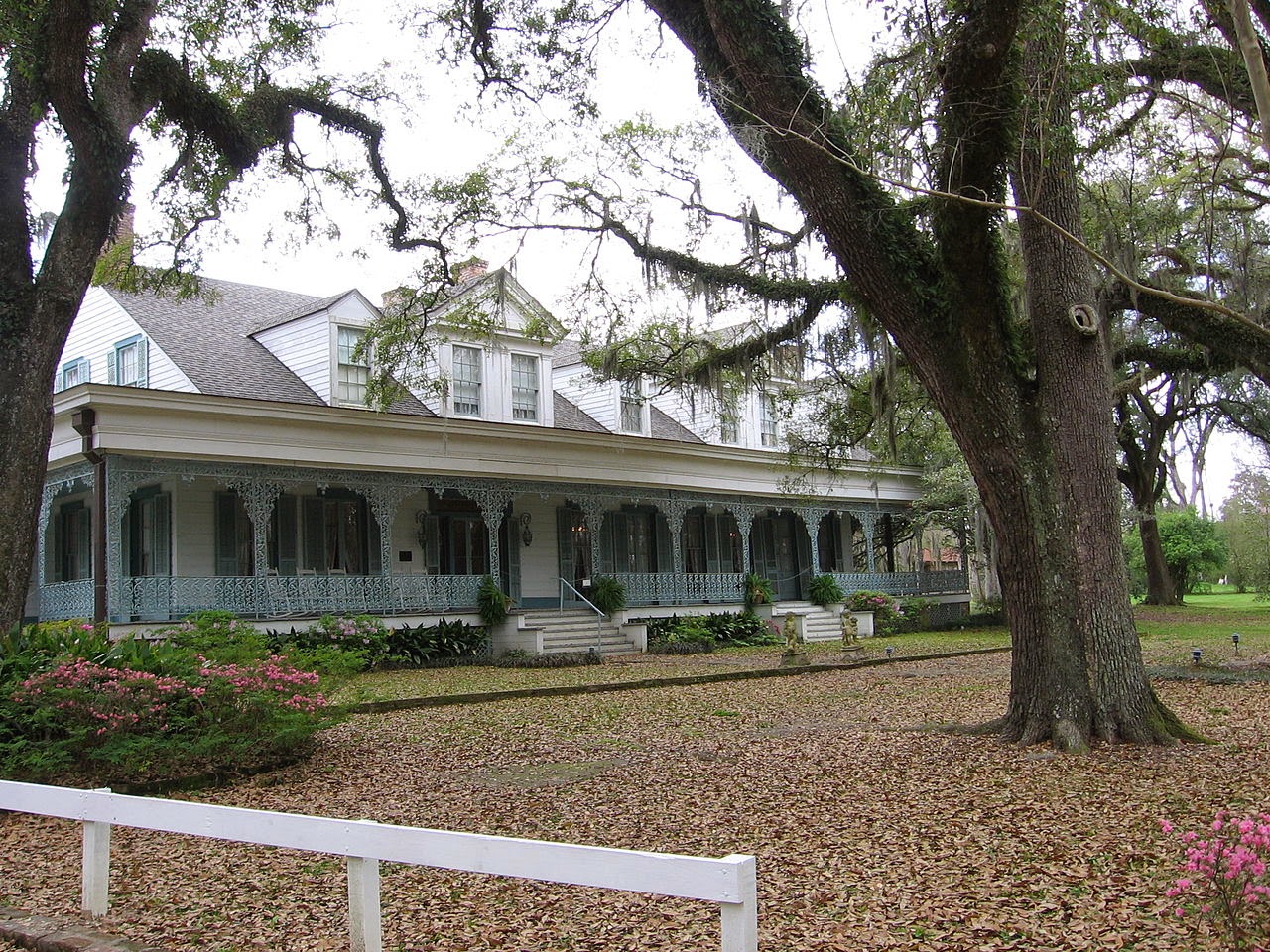 glimpse into what life was like in the mid 19th Century. The homes where my great-grandparents and their families lived are no longer there, but houses similar to theirs are still in existence where the town retains the flavor of days gone by. This home is named "The Myrtles" and is a Louisiana style with the wrought iron decor setting off the porches of the house.

Below is a picture of one of the dozens
of trees on the the land that give the plantation its name. Those are my cousins sitting under the tree during our visit there in 2005. 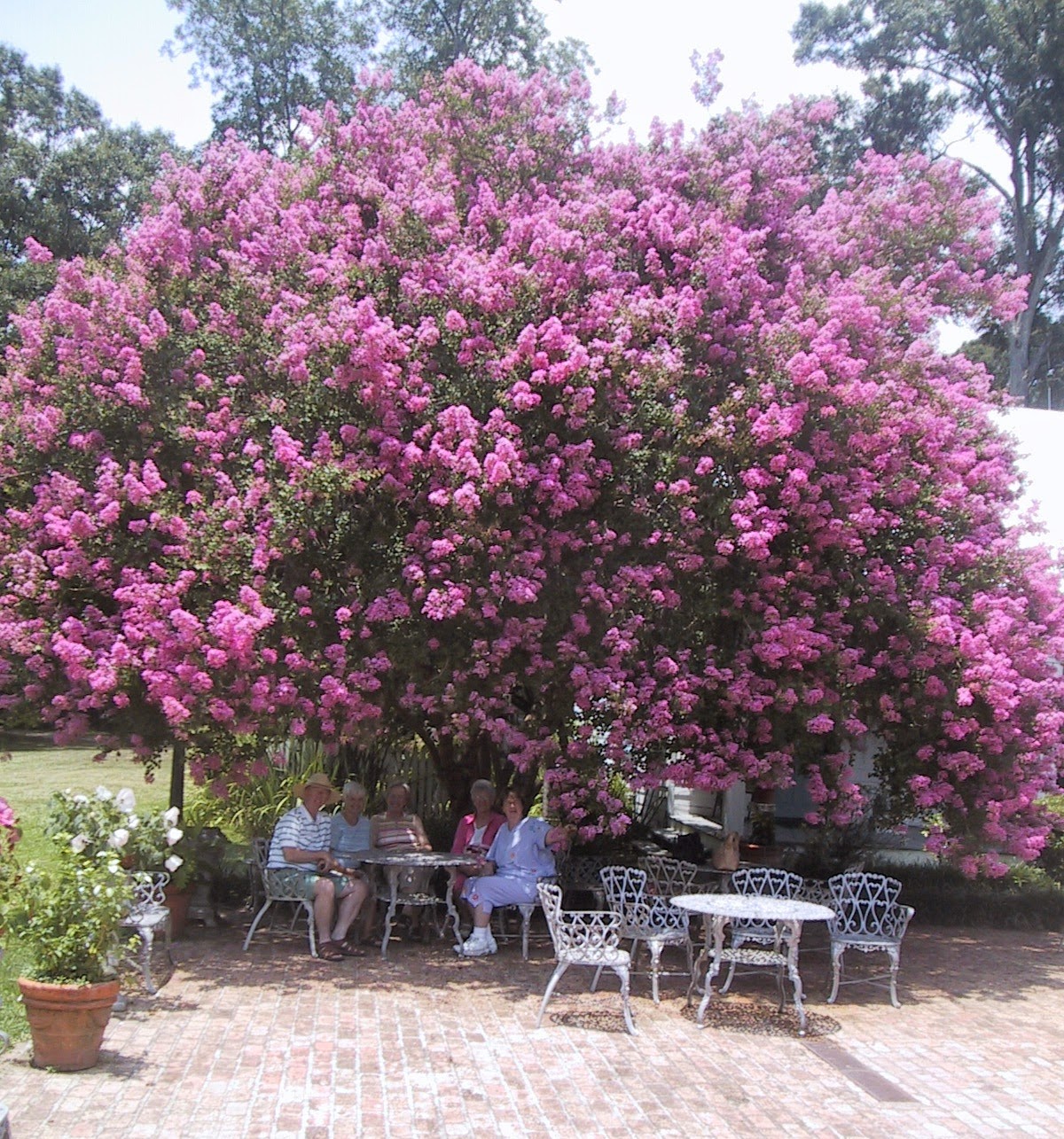 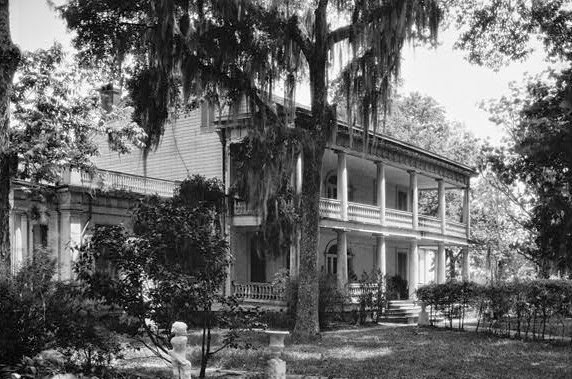 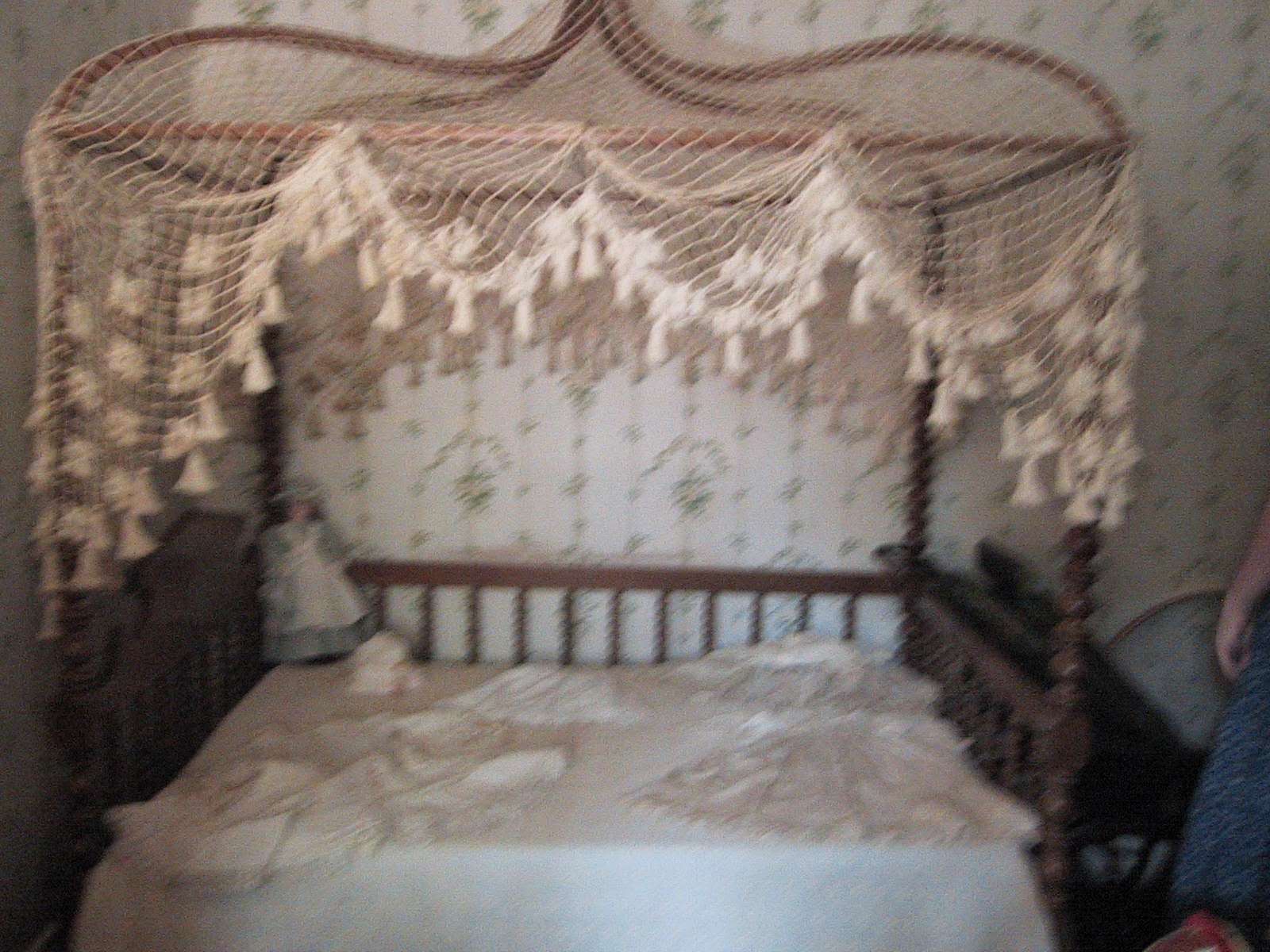 Rosedown is a more traditional southern plantation style home. It has the balconies that are seen so often in Louisiana homes. The picture of a child's bed gives a glimpse into the lifestyle of the mid-nineteenth century.

Down the road a piece, toward Baton Rouge, is the site of a Civil War battle at Port Hudson. Walking through the quiet trees, I closed my eyes and could almost hear the sounds of battle raging around me. It was a moving experience, especially after I found my great-grandfather's brother listed as one of the officers taken as a prisoner of war.

My cousins and I re-visited the town in June, 2005, the month our great-grandparents were married at Grace Church. There we celebrated the 150th anniversary of that marriage and theirs is the love story portrayed in my novel, Love Stays True.