HIstorical Cures for Leprosy and #Giveaway!

How far would you go to cure a life threatening disease? Would you try whatever the physicians gave you? Drink human blood? Snake venom? Would you risk being stoned by your neighbors?

Last month we discussed leprosy in Bible times and the Jewish view of the disease. This month, we're going to take a look at some other nations and the ways they treated the disease.

In Greece: Blood was a treatment for leprosy, specifically the human blood of children or virgins. The patient would drink blood, or bathe in it. This method was also known in ancient Egypt and China. This practice was in use all the way up till 1790 when we have a record of dog blood being used in the De Secretis Naturae. Lamb's blood was also mentioned around that time.

Other treatments included cobra venom, bee stings, snake bites, scorpions and even frogs. The waste of certain fish were also experimented with.  in 1913, a french scientist tried an increase of bee stings, up to 4000, in order to cure it.

I really can't imagine where they came up with these ideas, and why they thought it would work. But that comes from my 21st century vantage point. ;)


By the early 20th century, doctors began injecting patients with the oil from the chaulmoogra nut. This seemed to work for some folks, but was very painful and unreliable.

Did you know that leprosy victims in the U.S. were not allowed to vote until 1946?

In the 1950's, doctors discovered the dapsone pills, which seemed to work. However, after some time the leprosy virus built up a resistance to dapsone, and results plummeted.

The modern day cure for leprosy was developed on the island of Malta in the 1970's. What they discovered was that if you treat the disease with multiple drugs, you will have success. This has become known as Multiple Drug Therepy (MDT). The modern treatment combines dapsone, rifampicin (or rifampin) and clofazimine. It can take 6 months to a year, or sometimes more for the treatment to work.

Today, according to the American Leprosy Mission, someone is diagnosed with leprosy every two minutes. Even though they have found a cure, many cannot afford it. Ministries such as ALM raise money to help those suffering with this horrible disease.

Leave a comment below to be entered in the drawing to win Amber's book, The Healer's Touch. 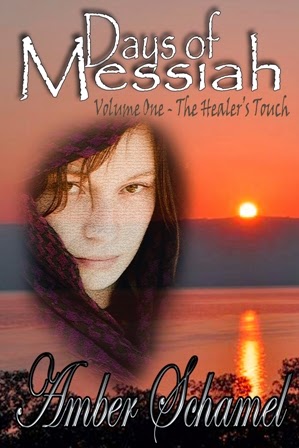 Aaliyah's last chance at winning her husband's love is destroyed when she is banished from her home as an 'unclean' sinner, exiled to the leper colony. When a chance at being cured comes in the form of a rumor, she must risk her life to appear in public, or die a leper.


Amber Schamel is the author of The Swaddling Clothes and the Days of Messiah series. She writes riveting stories that bring HIStory to life. Connect with Amber on her website, www.AmberSchamel.com or Facebook, Goodreads, or Twitter.
Posted by Amber Lemus at 12:00 AM