Last month, I shared about the historic forts of Colorado. This month, it's a shift in theme to introduce to you a man whose legacy and stamp on Colorado Springs still lives on today. Over the next 5 months, I'll be showcasing Spencer Penrose and highlighting just a handful of significant establishments made possible through his generous and charitable investments. 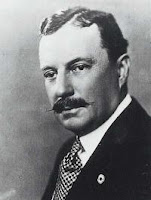 I've been living in Colorado Springs for eight years now, and almost everywhere I turn, something I see or somewhere I go is brought back to a single name: Spencer Penrose. Whether it's taking my children to the Cheyenne Mountain Zoo (built by Penrose to house his collection of rare and exotic animals), taking a drive to the top of Pikes Peak: America's Mountain (built by Penrose as an alternative to the Cog Railway), visiting The Broadmoor Hotel (purchased and turned into a world-class luxury resort by Penrose), or even giving birth to my children at Penrose-St. Francis Hospital (named for Penrose), so much of this beautiful city has the stamp of Spencer Penrose somewhere on it. In my quest to unearth more about the history of Colorado Springs, I figured it only fitting to start with this man.

Spencer Penrose (November 2, 1865–December 7, 1939) was a businessman, entrepreneur, venture capitalist, and philanthropist at the turn of the 20th century.

He was 1 of 7 sons born into a prominent Philadelphia family to Richard Alexandria Fullerton and Sarah Hanna Penrose. In 1886, he graduated last in his class from Harvard. Not exactly a boast-worthy accomplishment many would want to herald. Some of that might be due to Penrose's talent with the ladies and the distraction they offered away from his studies. Regardless, he soon turned his sights to entrepreneurship when he ventured west to follow his boyhood friend, Charles L. Tutt, to Colorado. After becoming the manager of the local real estate office, his investments led to great fortune in copper, silver, and gold. 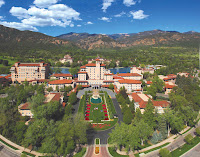 In his desire to give back to the community which had afforded him so much and the minerals which made him a fortune, Penrose used his vast amounts of money to invest in other national mineral concerns, financed construction of the Will Rogers Shrine of the Sun, and the Pikes Peak Highway (1916), The Broadmoor (1918), the Cheyenne Mountain Zoo (1926), and the Glockner-Penrose Hospital, and established the El Pomar Foundation (1937), which still oversees many of his contributions in Colorado Springs today.

He and his wife, Julie, were also active in the Pikes Peak Chapter of the American Red Cross, and there's an amazing collection of their vintage automobiles, carriages, and race cars in The Carriage House, adjacent to The Broadmoor hotel. It's quite a sight to see.

That collection and the building of the Pikes Peak Highway led to the annual Pikes Peak International Hill Climb Race, an event Penrose used to advertise the highway and draw attention to it for tourists. It's absolutely crazy if you ask me! It's the 2nd oldest motorsports race in America, but you'd never see me getting in any vehicle going that fast around those hairpin turns with those deadly drop-offs! Still, every year, daredevils do it, and so far, the record is an astonishing 8 minutes and 13 seconds to race on a fully-paved 12.42 mile course with 156 turns that begins at 9,390 feet and finishes at the 14,115 foot summit of America’s Mountain. Umm...no thank you!

* Have you ever been to Colorado Springs? If so, what brought you here and what (if any) sightseeing did you do?

* Do you have a favorite attraction in or near Colorado Springs you love to visit?

* Which zoo is your favorite in the United States?

* Would you ever get into a car that was participating in the Pike's Peak International Hill Climb Race? Why or why not?

She lives with her husband and fellow author, Stuart Vaughn Stockton, in Colorado. They have one girl and one boy, a Retriever mix named Roxie and and Australian cattle dog named Timber. She has sold seventeen (17) books so far and is currently seeking a new literary agent for representation. You can also find her on Facebook, Twitter, Pinterest, and LinkedIn.
Posted by Tiffany Amber Stockton at 1:00 AM