I'll be posting a series on Route 66 over the next three months, but a recent trip to California and the "end of Route 66" prompts me to begin with what really should be the final episode. However, as I've traveled many sections of Route 66 over the years, I've found that it doesn't really matter where you start as there are treasures all along the way.

As glamorous and vibrant as the Santa Monica Boardwalk is today, it's hard to believe that it really had a stinky beginning. Santa Monica, as part of the greater Los Angeles area, sits on the edge of the Pacific Ocean, and by the beginning of the twentieth century the city had grown by leaps and bounds. So much so that disposing of sewage waste had become a problem. The idea was proposed that they would build a 1600-foot long pier with a pipeline running under it to carry treated sewage to the Pacific Ocean (a practice that was stopped in the 1920s). The project was completed in 1909 with much fanfare. To obscure the real purpose behind its creation and to avoid the pitfalls of wooden piles, the pier was made of concrete - the first concrete pier on the West Coast.


Thousands of people attended opening day complete with a tableau vivant performance entitled The Surrender of Rex Neptune. At dusk, the mighty king of the sea (Rex Neptune) climbed onto the deck and declared that he was there to destroy the pier. After the Queen of Santa Monica told him it was made of concrete and was impossible to destroy, Rex Neptune inspected it and admitted defeat. He then dove from the end of the pier into the ocean in a blaze of flames. The crowd loved it.

The pier gained instant fame as everyone's favorite fishing spot as entire families flocked to try their luck. Stories of the 500-pound fish that "got away" circulated with some basis of truth to them as giant sea bass weren't uncommon in the waters of Santa Monica Bay during the early years of the pier.

To "keep up with the neighbors" who boasted of amusement parks along the ocean, a second pier was built adjacent to the existing one in 1915. Dubbed the Looff Pleasure Pier, it boasted a carousel, roller coaster, Bowling and Billiards building, a fun house, and a new picnic pavilion.  It was a top local attraction until 1919 when the pier collapsed. It turned out that the concrete piles weren't meant to last and rust caused the pier to drop two feet. Repairs took more than two years. 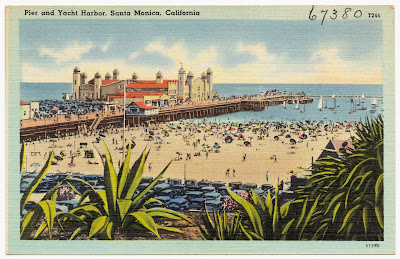 The new pier gave way to a wooden boardwalk over the concrete, but the amusement park waned in the early 1920s. The La Monica Ballroom which looked liked a floating castle was built and was the hot spot in town until the Depression years. 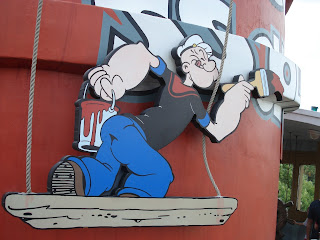 In 1925, Olaf C. Olsen, a retired sailor started a small boat fishing operation and worked to keep the large commercial operations away from the Santa Monica Bay. During the Depression, he donated part of his daily catch to those who needed food. Elzie C. Segar, a cartoonist who was a regular at the pier, found in Olaf C. Olsen a real life hero for his comic strip Thimble Theater - the character we all know as Popeye! The rest is history.


In 1934, the Santa Monica Yacht Harbor, was fashioned to host a highly publicized sailing regatta. The yacht harbor attracted the likes of Charlie Chaplin who had a mooring there, and in 1941, an archway was constructed at the entrance with neon lettering - "Santa Monica Yacht Harbor" - The arch has since become an iconic symbol.

A Lifeguard Service (and training center) was started in the 1920s and remained for several decades. Buster Crabbe and Johnny Weissmuller - both actors who played Tarzan on the big screen - were inducted as honorary lifeguards.

Other attractions were Paddleboard Clubs - an idea imported from the Hawaiian Islands, gambling barges, and a resurrected amusement park.

Wartime activities at the pier during WWII included local commercial fishermen dumping their catches on the pier to be loaded onto navy vessels and sent to feed our troops. Some of it was trucked to feed the American people as well. Federal assistance had to be brought in to help with the wear and tear that the relief operation had on the pier. At the end of the war, the La Monica ballroom saw new signs of life with bookings by Desi Arnaz and Western Swing bands. It was also the site of the first-ever live broadcast of a television variety show.

By the 1960s, the attractions had deteriorated and the clientele had gotten pretty seedy. Activists and Hollywood stars worked diligently to keep the spirit of the pier alive until a "Save The Pier" campaign was started in 1972. Renovations were done, but in 1983 a fierce winter storm assaulted the pier destroying one-third of it. A full-scale restoration project ensued, and the pier has had a busy life ever since.

I must confess, I'd never been to a Boardwalk quite like it. An amusement park that rivaled many I've been to, food stands, restaurants, a variety of souvenir shops, sun-bathers and swimmers enjoying the wide, sandy beach, and this - 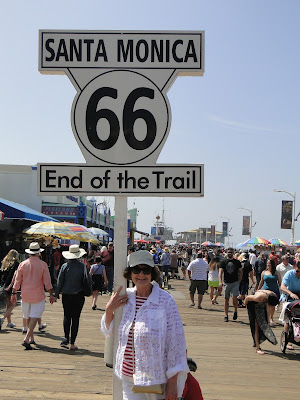 The end of Route 66. That's what I'd come for - to have my picture made here. It turned out, though, that the entire afternoon on the pier was a pure delight with the salty sea breeze and swarms of people who'd come out for a day of fun! 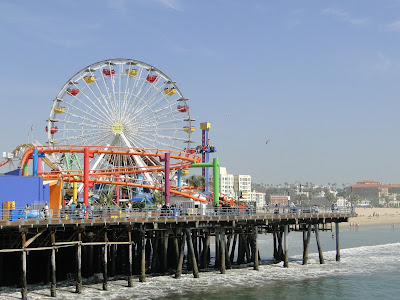 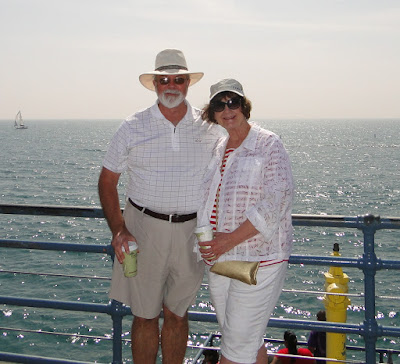 I can't wait now to share more Route 66 wonders with you in the next few months. Until then, how about you? Have you been to the Santa Monica Pier or any other spots along Route 66? Care to share some of your memories? I'd love to hear them.

Carla Stewart is the award-winning author of six novels. With a passion for times gone by, it is her desire to take readers back to that warm, familiar place in their hearts called “home.” Her 2014 release, The Hatmaker's Heart, was a finalist for the Oklahoma Book Award and the Selah Award. Her newest release is A Flying Affair. Daredevil Mittie Humphreys navigates her heart as well as the skies in this beguiling adventure of grit and determination during the rollicking Roaring Twenties. Learn more about Carla at www.carlastewart.com

"A well-written romance with characters willing to do what they need to achieve their dreams. The storyline is believable, and some of it is based on true events. Stewart did her research and brings to attention a forgotten piece of history, the Women's National Air Derby."―RT Book Reviews, 4 Stars


Research source for this article: The Santa Monica Pier website. All photos except personal ones courtesy of Wiki Commons.