In July 2008, the “Facebook for iPhone” app launched. Soon it was possible to attach a message to a photograph and wirelessly send it to almost anyone, all with a device that fit right in your pocket. In other words, Facebook caught up with the Eastman Kodak Company’s innovation of the 3A Folding Pocket Camera from 1903!

By the dawn of the twentieth century, photography had been around in various forms for over two generations. Card mounted portraits called cabinet cards, introduced in the 1860s, required a trip to a professional photographer’s studio for a formal sitting, and developing the images required a darkroom, messy plates, and a complex chemical process. It was only a matter of time before advancing technologies simplified photography for the average consumer.

Beginning in 1878, George Eastman spent years innovating with photographic dry plates, negative papers, and photographic film, and building up the company that would become Eastman Kodak Company of Rochester, NY. When the first Kodak camera came to market in 1888, advertised with the slogan, “You press the button, we do the rest,” cabinet cards quickly fell out of vogue throughout the 1890s as photography became more accessible to amateurs. 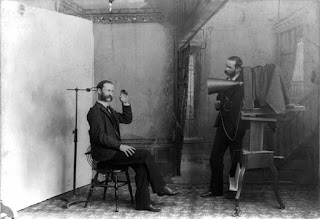 From Wikimedia Commons: “A composite photograph showing a photographic studio interior. One man is seated on a stool near an adjustable clamp to hold his head steady during a long portrait exposure. The second man, standing next to a large view camera, looks like the person being photographed. Satire on photographic practices.” (A. H. Wheeler, photographer, Berlin, Wis., 1893. Image from the United States Library of Congress. Public domain.)

Introduced in 1903 as a part of a line of relatively inexpensive cameras sold by Eastman Kodak, the 3A Folding Pocket Kodak cameras used No. 122 film which created 3¼ X 5½ inch images which could then be produced onto postcard stock. These cameras were made of aluminum and covered in seal grain leather, and boasted features such as daylight loadable cartridges, a Double Combinations Rapid Rectilinear lens of 6½ inches, and a shutter speed of f.8. Furthermore, as per the name, they were designed to fit in a gentleman’s top coat pocket. 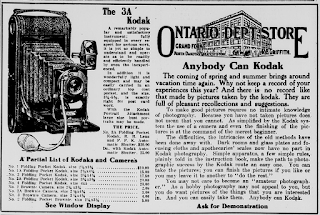 On March 1, 1907, U.S. postal regulations changed, allowing both the address and message to appear on the same side of a postcard. Divided-back postcards became commonplace, and corresponding via “Real Photo Post Cards,” (often shortened to RPPC) grew into a popular pastime. Like many more recent communicative innovations, these postcards provided a simple and inexpensive way for people to overcome the limits of proximity and share their lives in more meaningful ways with the ones they loved. 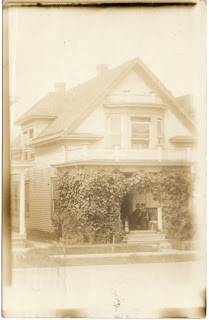 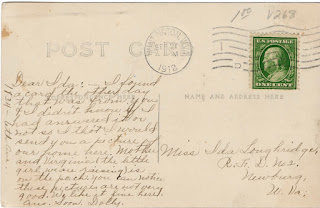 “I tho’t I would send you a picture of our home here. … You can notice these pictures are not very good.”

Of course, the novelty of the technology is often evident in the messages included with Real Photo Post Cards, too. 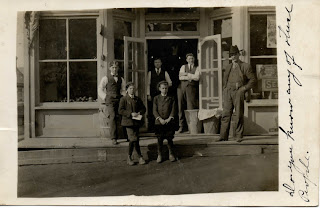 “Do you know any of these people.”

The Eastman Kodak Company was not the only manufacturer vying for a share of the photography market—indeed, a number of their advertisements show concern for protecting their brand with slogans like, “If it isn’t an Eastman, it isn’t a Kodak.” Rival company Ansco also produced a pocket folding camera that produced postcard sized images, and they also gave these cameras the 3A designation. (Seems like most companies wouldn’t even try transparent shenanigans like that today!)

Kodak produced its 3A Series until 1915, although cameras that took No. 122 postcard format film continued to be produced until 1943. If you have one of these antiques, you’ll have a hard time using it. No. 122 film was discontinued in 1971, and today the rolls are both rare and expensive. 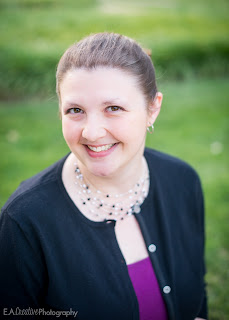 The technology changes with the decades (or in our time, with the seasons!), and it sometimes gets in our way, becoming a focal point instead of a means to an end. In the age of social media, antique RPPCs are a reminder that media—the channels of communication we use and the messages we send—are inherently social. At $20.00 in 1903, the 3A Folding Pocket Kodak was definitely a luxury item, but one that touched a felt need that we continue to share today: to remain connected and engaged with the people we care about across all distances.

BRANDY HEINEMAN is a Christ-follower. She’s also a book hoarder, a cat herder, a first-generation Southerner, and a self-appointed family historian. She likes to cook when it’s convenient, and to order pizza when it’s not. An alumna of Wesleyan College (Macon, Ga.), she has written for ACFW’s The Journal, Writer Interrupted, and Book Fun Magazine. Brandy resides in metro Atlanta with her Captain of Street Cred and super-hero hubby, Michael. Find her on Facebook, Twitter, and at brandyheineman.com.

Whispers in the Branches 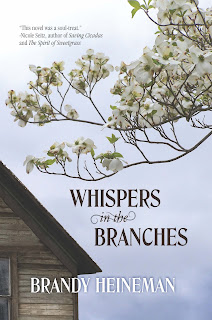 “As a lover of research and genealogy, this novel was a soul-treat. Abby Wells hears the siren call of buried family secrets. Add to that a ghost and a love triangle, and Whispers in the Branches is one suspenseful read. I was hooked and couldn’t put it down. Heineman is a talented storyteller.” –Nicole Seitz, author of Saving Cicadas and The Spirit of Sweetgrass