History of the United States of America Flag
by Martha Rogers

With Flag Day coming on June 14, I thought it would be interesting to learn more about our flag. The actual beginnings of our flag as we know it, are surrounded by controversy and differing opinions. Although Betsy Ross is the name most associated with the origin of the flag, a congressman named Francis Hopkinson is most likely the one to have designed it. In fact, one historian said the flag was not the design of any one person, but the compilation of many. Betsy Ross is claimed to have been the producer of flag, but evidence for and against her family claims exists.

Reasons for doubt:
·         No records show any one person or committee assigned to design the flag.
·         No evidence George Washington and Betsy Ross knew each other
·         No mention ever made any diaries or letters of Washington
·         Flag Resolution of 1777 first documented meeting with discussion or debate about a flag.

Support:
·         George Washington was in Philadelphia in the spring of 1776 where he served on a committee that approved money for acquisition of tents and other sundry articles for the Continental Army.
·         On May 29, 1777, Betsy Ross was a paid a large sum of money from the Pennsylvania State Navy Board for making flags.
·         Rachel Fletcher, Betsy’s daughter gave an affidavit of the story.
·         Paintings depicting Betsy with George and sewing on the flag lend support to the story. 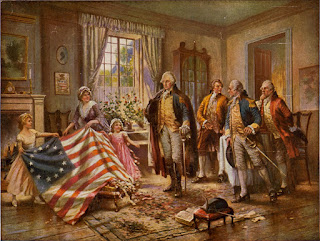 Before the official new flag was commissioned, the very first flag flown for the Revolutionary troops was the Union Flag carried the first year.

After that, the “Betsy Ross” flag is seen in most depictions. 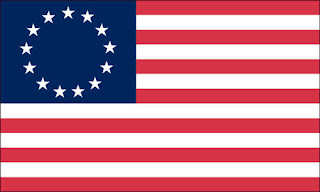 However, until 1912 there were no stipulations for the order of the stars or the proportions of the flag. The only two requirements were that the stars be on the blue background, and there were to be 13 red and white alternating stripes, except for the years 1795 to 1818 when the flag had 15 stripes. At that time, the flag went back to 13 stripes and one star for each state, with new states to be added on the 4th of July following the states admission.

Here are a few of the various forms displayed before the standard was adopted.

In 1912, Taft established the proportions for the flag and provided the arrangement of stars to be six rows of eight each with a single point of the five-pointed star be upward. The staggered rows came into being with an Executive Order by President Eisenhower in 1959. Later that year, the star arrangement become nine rows staggered horizontally and eleven rows staggered vertically.

In the early years of the flag, it was seen only with army troops and at special celebrations of our country. It flew over forts, federal buildings, and at other government functions. It flew at Ft. McHenry during the famous battle when Francis Scott Key penned the words to the song, The Star Spangled Banner, which became our National Anthem. That flag rests in the Smithsonian Institute today. 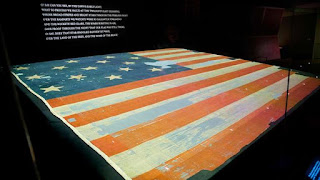 As the years progressed and people became more patriotic, the flag was flown at more and more events and especially at Flag Day exercises and celebrations.

On June 14, 1889, George Balch, a kindergarten teacher in New York City, planned appropriate ceremonies for the children of his school, and his idea of observing Flag Day was later adopted by the State Board of Education of New York. On June 14, 1891, the Betsy Ross House in Philadelphia held a Flag Day celebration, and on June 14 of the following year, the New York Society of the Sons of the Revolution, celebrated Flag Day.

Following the suggestion of Colonel J Granville Leach (at the time historian of the Pennsylvania Society of the Sons of the Revolution), the Pennsylvania Society of Colonial Dames of America on April 25, 1893 adopted a resolution requesting the mayor of Philadelphia and all others in authority and all private citizens to display the Flag on June 14th. Leach went on to recommend that thereafter the day be known as 'Flag Day', and on that day, school children be assembled for appropriate exercises, with each child being given a small Flag.

President Wilson established a Flag Day and it was celebrated for years, but June 14th became the official date in an Act of Congress signed by President Truman in 1949.

Certain rules of etiquette surround the use, display, and retirement of the American flag fondly known as Old Glory. These are the rules in general:


The flag should be lighted at all times, either by sunlight or by an appropriate light source.


The flag should be flown in fair weather, unless the flag is designed for inclement weather use.

The flag should never be dipped to any person or thing. It is flown upside down only as a distress signal.

The flag should not be used for any decoration in general. Bunting of blue, white and red stripes is available for these purposes. The blue stripe of the bunting should be on the top.

The flag should never be used for any advertising purpose. It should not be embroidered, printed or otherwise impressed on such articles as cushions, handkerchiefs, napkins, boxes, or anything intended to be discarded after temporary use. Advertising signs should not be attached to the staff or halyard.

The flag should not be used as part of a costume or athletic uniform, except that a flag patch may be used on the uniform of military personnel, fireman, policeman and members of patriotic organizations.

The flag should never have any mark, insignia, letter, word, number, figure, or drawing of any kind placed on it, or attached to it.

The flag should never be used for receiving, holding, carrying, or delivering anything.
When the flag is lowered, no part of it should touch the ground or any other object; it should be received by waiting hands and arms. To store the flag it should be folded neatly and ceremoniously.

The flag should be cleaned and mended when necessary.

When a flag is so worn it is no longer fit to serve as a symbol of our country, it should be destroyed by burning in a dignified manner.

There are others, but these are the main ones to be followed by American citizens. It is flown at half-mast on the occasion of deaths of prominent leaders such as the President or military/government leaders.

One of the most famous pictures of our flag in war times is the one of it being raised on Iwo Jima. I was a young girl when I saw it in the newsreels and then on a magazine cover. It is a picture I'll never forget. 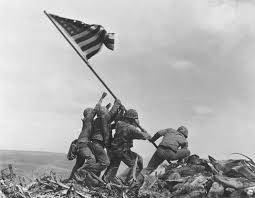 This week as we celebrate Flag Day and honor Old Glory, remember the battles she has seen, the many coffins of military heroes she has covered, and the ones commemorated by flying her at half-mast.

If, like me, you learned something new about the flag today, tell me what you learned or some other fact not mentioned here.

Martha Rogers is a free-lance writer and writes a weekly devotional for ACFW. Martha and her husband Rex live in Houston where they enjoy spending time with their grandchildren.  A former English and Home Economics teacher, Martha loves to cook and experimenting with recipes and loves scrapbooking when she has time. She is the Director of the Houston Christian Writers Conference held in August each year. She has written three historical series, Winds Across the Prairie and Seasons of the Heart and The Homeward Journey. Her new contemporary series, Love in the Bayou City of Houston and novellas, Christmas Blessing, Love Comes to Bluebonnet Inn, and Garden of Love are now available on Amazon.