During the 1700s large numbers of Germans migrated to the British colonies. Many settled in Pennsylvania, among them my Hochstetler ancestors, who came to this country in 1738. Naturally the first necessity for any settler was shelter, so today we’re going to take a look at the typical homes of these German immigrants.

Most of the earliest Pennsylvania German homes were constructed of straight-hewn logs with finely dovetailed joints, but German settlers were also noted for their sturdily built stone houses. Many homes, whether log or stone, were constructed in a distinctively medieval form that featured steep roofs sometimes covered with red clay tiles, thick walls, and small, irregularly spaced windows. A central fireplace was most common, in contrast to the British style of construction that featured a fireplace on each end of the building.

Traditional floor plans had 1 to 3 rooms with a corner stairway that led up to a loft or second floor. The 3 room layout included a large Küche (kitchen) on one side of the central chimney and two smaller rooms, the Stube (parlor) and Kammer (bedroom) on the other side, both entered from the kitchen. The two room layout had only a kitchen (also called a hall) and a parlor, which were on opposite sides of the central chimney. The second story contained additional bedrooms and separate space for storage. An attic provided additional storage and space for food preservation.

The outside entrance into the house was traditionally through the kitchen. Generally a long narrow room on the northwest side of the house, this space included the great, open fireplace, used for cooking and heating, a large worktable, and the dining table with benches or chairs. The main room was the parlor, heated by a closed five-plate stove, also called a close stove or jamb stove, that was a cast-iron, porcelain, or earthenware box, either plain or ornately decorated. The back side of this kind of stove was open and mortared into the brick or stones of the chimney. The rear of the kitchen fireplace, then, had an opening called the stove hole or offenloch, through which either wood for burning or hot air could be fed into the stove.

Some early stone houses were built over a spring to provide running water and a cool area for food storage in the basement. Others were built into a bank or hillside, partially underground for cold storage as well as for lower cost and efficiency, a style attributed to medieval Swiss tradition. Many banked houses were later expanded to become 2 or 3 stories with the ground floor then used only as a kitchen or for storage. On the Pennsylvania frontier many houses were fortified by adding extra thick walls and small windows as defense against Indian attack. Fort Zeller, built in 1745 near Newmanstown, Lebanon County, was actually a house built in this manner rather than a true fort. It is one of the few remaining examples of Germanic architecture in this country and is also Pennsylvania’s oldest existing fort. Pioneers who came to the Tulpehocken from the Schoharie valley built it in 1723 and rebuilt it in 1745. It was used as a place of refuge during Indian Wars.

I sometimes complain about all the household work I have to do even though I have at hand a multitude of labor-saving devices and technology to make my life easier. When I think about our pioneer ancestors, who had work to do almost every waking hour, most of it hand labor, I’m humbled and grateful. Next month I’m going to take a more detailed look at the housewife’s daily cores and the implements she had to accomplish her work. Believe me, all of us have things very easy today in comparison!

What do you appreciate the most among the comforts of your home? 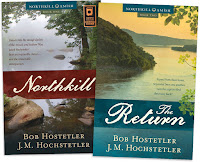 J. M. Hochstetler is the daughter of Mennonite farmers and a lifelong student of history. She is also an author, editor, and publisher. Northkill, Book 1 of the Northkill Amish Series coauthored with Bob Hostetler, won Foreword Magazine’s 2014 INDYFAB Book of the Year Bronze Award for historical fiction. Book 2, The Return, releases April 1, 2017. Her American Patriot Series is the only comprehensive historical fiction series on the American Revolution. One Holy Night, a contemporary retelling of the Christmas story, won the Christian Small Publishers 2009 Book of the Year Award.