A footnote from history by Stephanie Grace Whitson. 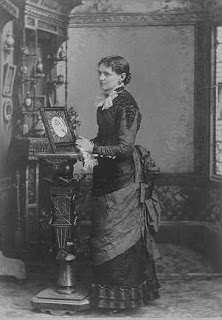 "Widow's, which is the deepest of all mourning, consists of a plain gown of Henrietta cloth or bombazine, with crape upon it or not ... the length of the veil differs, of course, according to one's height, but the real widow's veil should reach to the edge of the skirt, back and front,
and be finished by a hem a quarter of a yard wide. This is worn so that the whole figure is shrouded for three months; after that it is s thrown back, and at the end of another three months, a single veil, reaching to the waist, is worn. This may be worn for six months, and crape then be laid aside." 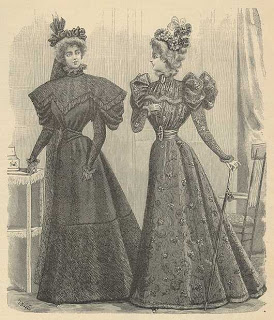 Since the veil in the photo on the right has been "thrown back," we can assume that this young widow's husband died over three months ago.

Prior to the Civil War, the widow's first year mourning attire consisted of black silk, with undersleeves and collar of black crepe, black crepe trimming, and black jet jewelry. The second mourning, after the first year, would have allowed white trim. As the 19th century wore on, customs required longer periods of mourning and "the rules" became more carefully defined. It was difficult for those who were less wealthy to keep all the rules. They could purchase ready-made mourning costumes from "mourning warehouses," and sometimes resorted to dyeing clothing they already owned black in order to follow the customs. Half mourning after 1860 allowed for women to wear soft mauve, violet, pansy, and lilac.

Nineteen-century widows would have shunned me. After all, when my husband died in 2001, I wore red to his funeral. Red. Horrors! Well ... his long cancer battle was over ... he'd graduated to heaven ... and ... it was my way of rejoicing for him. So was our singing "Shout to the Lord" at his funeral. That doesn't mean deep mourning didn't follow, but I'm thankful I didn't have to shroud my entire body for the next three months. As if I needed a reminder that my beloved was gone. 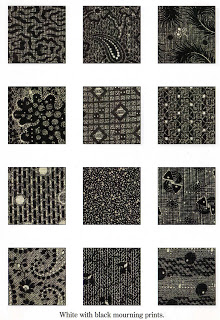 Many businesses in the 19th century were products of elaborate social customs. The funeral industry, textile production, and even photography were affected by the mourning industry. When we realize that over half a million men lost their lives in the Civil War ... when we think that a man's wife, mother, and children all went into deep mourning, we can also imagine the demands put on the textile industry. Just think what it was like on the streets of every city and town in America. Just think of all that black silk.

The textile industry responded to mourning customs with more than silk and crepe. Cotton mills began to produce specific prints known today as "mourning prints." In her book Clues in the Calico, textile historian Barbara Brackman writes, "the 1902 Sears catalog offered mourning prints 'at 5 1/2 cents per yard. Very Best Quality of Mourning Prints. These prints are very swell, and are worn by ladies or misses, are neat and will wash without fading."

While I wore red ... as the months went on and I was still in mourning, I realized that, while the Victorians may have taken it to the point of excess, there is something to be said for a public display that says, "I've lost someone dear to me ... please be kind."

What do you think of Victorian mourning dress? Do you think it helped or hurt those who had to follow "the rules"? How can we help those in mourning today? 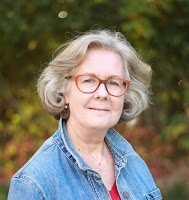 Stephanie Grace Whitson has been writing full time since her first novel was released in 1995. 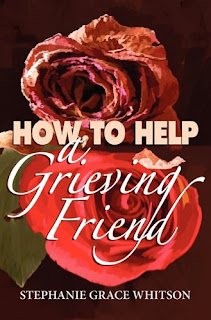 Many of her historical novels have required her to study mourning customs in the late 19th century.

She is also the author of the non-fiction How to Help a Grieving Friend (originally published by NavPress and soon to be re-released), based on the personal experiences of several church families--her own included.

Learn more about Stephanie and her books at www.stephaniewhitson.com

Join the conversation about her writing life--and life in general at https://www.facebook.com/StephanieGraceWhitsonofficial/