One of my favorite places to visit in the Twin Cities is the home of James J. Hill. James J. Hill was the founder of the Great Northern Railway, and one of the wealthiest men in America. He counted Vanderbilts, Morgans, Goulds, and Astors among his friends, and he had a lifelong ambition to push a northern railroad route from the Great Lakes to the Pacific Ocean.

His home sits atop the Mississippi River Bluffs in St. Paul, MN on Summit Avenue and in the shadow of St. Paul's Cathedral. Summit Avenue boasts the largest collection of restored and original Victorian homes in America (as well as being the home of Minnesota's governor's mansion, F. Scott Fitzgerald's house, and Garrison Keillor's home.)

From the Minnesota Historical Society Site:

"Completed in 1891, the mansion was the largest and most expensive home in Minnesota. It contained 36,500 square feet on five floors including 13 bathrooms, 22 fireplaces, 16 cut-glass chandeliers, a two-story skylit art gallery, an 88-foot reception hall, and a profusion of elaborately carved oak and mahogany woodwork. It also boasted a three-story pipe organ created by renowned Boston organ-maker, George Hutchings. Sophisticated mechanical systems throughout the mansion provided central heating, gas and electric lighting, plumbing, ventilation, security, and communication. The final cost totaled $931,275.01 including construction, furnishings, and landscaping for the three-acre estate."

At one time, the James J. Hill House was the largest private dwelling in Minnesota, and in today's dollars, the house would cost in the neighborhood of $25,000,000.00 to build. 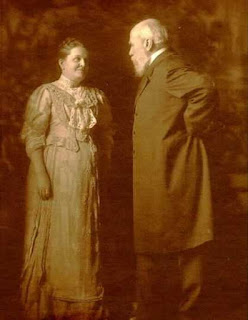 James built the home for his beloved wife, Mary. Mary was the daughter of Irish immigrants, and she met James while working in a hotel restaurant where he used to take his lunch break. When they fell in love and became engaged, Hill, who was not wealthy at the time, gathered enough money to send Mary to Milwaukee to finishing school. Hill was ambitious, and Mary believed he would be a great man. She knew she would need schooling and refinement to be a credit to him.

Hand-carved quarter-sawn white oak, a two-story pipe organ, tooled-leather wall coverings, coffered and gilded ceilings, and a boiler system from a locomotive are only some of the wonders to be seen when touring the Hill house. The Richardsonian Romanesque mansion is an excellent example of Gilded Age architecture, and a fitting home for "The Empire Builder" as James J. Hill was known.

Question for you: What's the most impressive mansion you've visited? Have you ever been to James and Mary's house on Summit Avenue in St. Paul?