Last month, I shared with you about the interesting woman, Dr. Mary E. Walker, who is the only woman to receive the U.S. Military’s highest award—the Medal of Honor. Well, there were other interesting details about her that I didn’t share, and I thought it would make another great post for this month.

Aside from being a female doctor at a time when such professions tended to be ruled by men, Dr. Mary Walker was also an abolitionist and a fighter for women’s rights. She fought for women’s suffrage, equal rights for women in divorce situations, the ability for women to keep their maiden names after marriage—and for women’s fashion reforms.

Many of us today tend to look at the Victorian era fashions with a bit of whimsy or romance. We see the big skirts, the bustles, the fancy dresses and think they were lovely styles. But for the women of that day, it was quite an ordeal to get dressed. To give you an idea of the layers a woman in the Victorian age would wear, here’s a rundown:

Stockings and Drawers
The “drawers” were a lightweight pair of pants, usually with a drawstring waist or sometimes a button closure and split down the middle “for convenience.” Chemise
A lightweight, shapeless garment that hung from the shoulders. It had a drawstring neck and was usually sleeveless.

Corset
Many of us are familiar with the corset—the whale-boned garment that gave Victorian women (and some fashion-conscious men) their wasp-waisted shapes. These garments featured a busk closure at the front and were laced tightly at the back.

Under Petticoats
This is a very plain underskirt made of stiffened material. It had a drawstring at the waist and was meant to provide the fullness they desired under their outer dress. Women would wear up to six of these under petticoats unless they were wearing a… 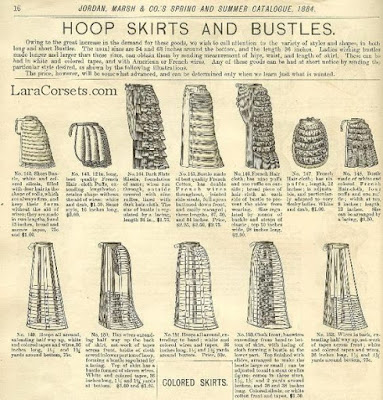 Victorian Crinoline/Hoop Skirt
If a woman was wearing one of these—a stiff, cage-type contraption that created the very full silhouette found in Antebellum or Victorian era fashions—then only one under petticoat was needed.

Over Petticoat
The final undergarment layer, this petticoat would fit over the hoop or crinoline. The over petticoat was a more decorative skirt, often with elaborate embroidered hem.

Dress
Finally, we reach the lovely dress, which consisted of a jacket-style top, which buttoned down the front and a very full skirt to fit over the mounds of petticoats on the bottom half. 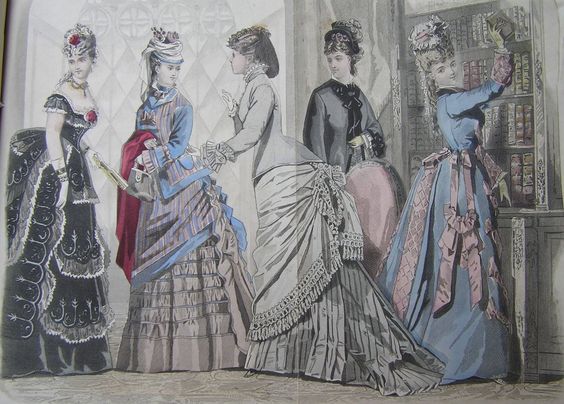 Bonnet and Gloves
The final piece to the ensemble was the mandatory bonnet and gloves, worn anytime a Victorian woman was out in public.

So with this snapshot of the typical nine layers of clothing a Victorian woman would wear, now think about trying to work in such an ensemble. The weight alone would be prohibitive, particularly when you consider most of the burden is tied around the waist. Another factor keeping women from working freely on household chores or other such things would be the constriction of the corset on the upper body. Corsets were often laced so tightly, women broke ribs, their internal organs shifted position, digestion was impeded, and they even made becoming “in the family way” more difficult. A third prohibition to such attire was the fact that the many layers of clothing dragged the ground, trapping dust and dirt, and as was discovered by Louis Pasteur in the 1860s, germs. All these things—as well as the fact that the skirt silhouette was so large that women often caught their clothes on fire when tending fires or cooking.

So there were many reasons that Dr. Mary Walker and others began fighting to change the fashions of their age through the National Dress Reform Association. A friend and fellow activist—Amelia Jenks Bloomer—created an interesting, if controversial, ensemble for women to wear. It paired a knee-length skirt with a pair of Middle-Eastern-style trousers (or bloomers) underneath. Some women chose to wear the rather startling style, but they were often decried in newspapers, bullied in the streets, and thought to have lost the allure by most in the court of public opinion.

Dr. Mary later took to wearing men’s clothing styles, despite the backlash among society. When she was captured during the Civil War while attempting to treat wounded behind enemy lines, she was given clothing to wear at the prison camp. However, she flatly refused, stating she would wear the clothing (men’s pants and shirt) she had come in with, since it was better suited for her circumstances. After the war, she was arrested more than once for “dressing against her sex” or “impersonating a man.” When she faced the judge, she informed him and all in the courtroom that “I don’t wear men’s clothes. I wear my own clothes.” She also made it know that she should have the right “to dress as I please in free America on whose tented fields I have served for four years in the cause of human freedom.” After that, the judge agreed, dismissed the case, and warned the police to never arrest her again for any fashion-related incident.

Mary’s efforts had little effect on the overall fashion of the day, though some women did give up wearing corsets or opted for pants with a shorter skirt over them for better freedom of movement while working. But you can certainly see that Dr. Mary Edwards Walker was a woman born too early—and she was born with enough gumption to fight the mores and standards of a very prim and proper time.

It’s your turn: Were you aware of how cumbersome Victorian women’s fashions were, and if you’d lived in that day, would you have gone with the bulk of society to wear those fashions, or would you have come down on the side of the fashion rebels and reformers?