Christmas favorite "Hark! The Herald Angels Sing" is one of more than 6,500 hymns written by Englishman and Anglican priest Charles Wesley...but the original song, first published in 1739 in the collection Hymns and Sacred Poems, was not quite what we sing today. 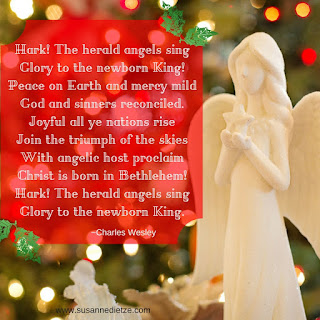 Charles Wesley was born in 1707 to Samuel, an Anglican priest, and Susanna, one of nineteen children, although nine would die quite young. One of his older brothers, John Wesley, would later found Methodism. After studying at Oxford, Charles Wesley was ordained into the Anglican church in 1735, as his father and brother John had been.


Despite his ordination, he experienced a conversation in May of 1738 which influenced his understanding of the Holy Spirit. He felt strengthened to share the Gospel in new ways, included open-air preaching, and began to write hymns.

Within the year, he'd written "Hark! The Herald Angels Sing" and seen it published. The form was different than we'd recognize now: it contained ten four-line verses, with no refrain.Wesley's theologically rich song was intended to be set to a slow, serious tune. It also began like this:


HARK how all the Welkin rings
"Glory to the Kings of Kings,
"Peace on Earth, and Mercy mild,
"GOD and Sinners reconcil'd!"

Joyful all ye Nations rise,
Join the Triumph of the Skies,
Universal Nature say
"CHRIST the LORD is born to Day!"

"Welkin" means "sky" or "heaven."
George Whitefield, fellow preacher and a fellow student with Wesley, took hold of the hymn and made some big changes in 1753. Where Wesley wrote, "Glory to the King of kings," Whitefield preferred "Glory to the newborn King." There were other changes that were possibly theological in nature, and Whitfield cut the final four verses.

Whitefield's version was published in his 1754 Collection of Hymns for Social Worship. Wesley was so upset, he refused to sing the new version.

In 1782, the hymn was revised yet again with the addition of the familiar refrain in New Version of the Psalms of David by Tate and Brady: "Hark! the Herald Angels sing/Glory to the newborn king."

In 1885, it was considered one of the "Great Four" Anglican hymns by the Rev. James King, who wrote a book about the hymns most often sung in the Anglican Communion. Two of the four are by Charles Wesley; the other is "Lo! He Comes with Clouds Descending." (The other two? "Rock of Ages, Cleft for Me" by Toplady and "All Praise to Thee, My God, This Night" by Ken.)

It is this version we sing today, a beloved and so familiar it was featured in 1965's "A Charlie Brown Christmas." It is difficult to imagine a Christmas Eve church service without it.

What is your favorite Christmas hymn?

Susanne Dietze began writing love stories in high school, casting her friends in the starring roles. Today, she's the award-winning author of over a dozen historical romances who's seen her work on the ECPA and Publisher's Weekly Bestseller Lists for Inspirational Fiction. Married to a pastor and the mom of two, Susanne lives in California and enjoys fancy-schmancy tea parties, genealogy, the beach, and curling up on the couch with a costume drama and a plate of nachos. Her books include My Heart Belongs in Ruby City, Idaho: Rebecca's Plight, a mail-order mix-up. Visit Susanne at www.susannedietze.com