Dreams and Destinies at Michilimackinac

And I'm doing a giveaway this week! Scroll down to the end of the article for more informaiton.

In January I wrote about the history of Colonial Michilimackinac, a fort that was built by the French, taken over by the British, and then destroyed once it was moved to a more strategic location on Mackinac Island. But what was the fate of two fur traders during the surprise attack in 1763? One, Charles de Langlade, was Metis—of French and Odawa ancestry. The other man, Alexander Henry, was born in in the colony of New Jersey.

Henry worked during the French and Indian War, as a merchant in Albany, New York, supplying the British troops. A fur trader told him of the riches to be had on Lake Superior and at Michilimackinac in the fur trade. He traveled to the area, disguised as a voyageur because he’d been warned of the enmity between the English and the Ojibwa. And, later his life was saved because a minor Ojibwa chief, Wawatam, had a dream about making an Englishman his brother and he was adopted by Wawatam.

Charles de Langlade had been educated by Jesuits, but his first language was Odawa. When he was ten years old, his uncle, the war chief, Nissowaquet, had a dream that if they took the boy into battle with them, they would win. Thus began his military career as he went into battle that day against the Chickasaw. By then his father had established a fur trading post in what is now Wisconsin.


As an adult he led Native Americans and fought on the side of the French during the French and Indian Wars. He was well respected by the native peoples. As tensions mounted between the French and English in the 1740s, de Langlade stayed with the French. He distinguished himself in a battle against pro-British forces and a British fur trader. He was awarded a pension and appointed as an Indian agent.

In 1750 he married Agathe, an Odawa woman, and started his family. Nobody knows what actually happened to this relationship but it was dissolved and he married again, this time to Charlotte Bourassa, a wealthy merchant’s daughter from Montreal.

During the 1750s, he continued to side with the French during the French and Indian War. Governor Duquesne asked him to raise up an armed force from the native peoples. He went on to lead them into victory over the British General Edward Braddock in Pennsylvania. After the war was won by the British, de Langlade settled in at Fort Michilimackinac as second in command of the French forces.

After New France passed into British rule, they also took over the fort. By October of that year the French had evacuated. However, Charles de Langlade remained as a fur trader and his family stayed with him.


In 1763, the local Ojibwa, as part of Chief Pontiac’s uprising, took part in a surprise attack on Fort Michilimackinac. They invited the English to watch them play Baggatiway, a game much like lacrosse, during festivities of the English king’s birthday. When a ball went through the open gates the native American warriors collected the knives and tomahawks hidden beneath the blankets their wives had wrapped around themselves, despite the June weather.

Charles de Langlade had warned the commanding officer, George Etherington of the likelihood of attack. Safe inside with his family, de Langlade waited things out.

By this time, Alexander Henry was his next door neighbor. He watched through his window as the English were led away to slaughter while those of French Canadian descent were left alone. He hurried to de Langlade’s door and pleaded for protection. De Langlade basically asked Henry what he wanted him to do about it, in French. However his Panis (a Pawnee captured and enslaved by another tribe) slave girl took pity on Henry and hid him in the attic.

The next day the Ojibwa found him and he was taken with other prisoners and forced into a canoe. The hungry prisoners were taunted by the warriors offering them bread spread with blood from their knives.

Due to fog, the canoe wound up at what is now Cross Village, where some Odawa were encamped, rather than their intended destination. The Odawa were angry not to have been asked to take part in the raid. They seized the Ojibwa’s prisoners and took them back to the fort. Eventually, they were released into the hands of the Ojibwa.

This is where Wawatam, recognizing Henry as the man from his dream, adopted him as his brother. Henry later found several of the other prisoners he’d been with had been executed. Henry went on to write of his adventures in the memoir, Travels and Adventures in Canada and the Indian Territories between the years 1760 and 1776, for which he became quite well known.

Both he and de Langlade went on to live full lives. De Langlade made Green Bay his permanent home and fought on the British side during the Revolutionary War.

Alexander Henry settled in Montreal as a merchant, still connected to the fur trade, after he left Michilimackinac in 1781. He’d left his Native American family behind and married Julia Kittson in 1785. He went on to make and lose at least one fortune.

I found it very interesting how the lives of these two men intersected at Fort Michilimackinac. Though from distinctly different backgrounds, they had much in common.

Whether de Langlade wanted to eliminate competition to his fur trade or was antagonistic toward Henry for another reason, no one knows why he denied help to his neighbor during the surprise attack. But as we can see, God had other plans for rescuing Henry and we can rest assured His plans are good for us even when they don't seem to make sense.

Do you have a favorite historical place you’ve visited and have been fascinated by its story? Please share in the comments below!

Please leave a comment by Friday, Feb. 23, 2018 for the chance to win a copy of either Rumors and Promises or Secrets and Wishes, winner's choice. U.S. winner only will be eligible to receive a paperback copy, Kindle copy available for an international winner. 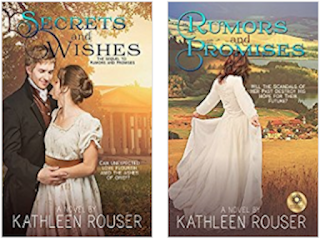